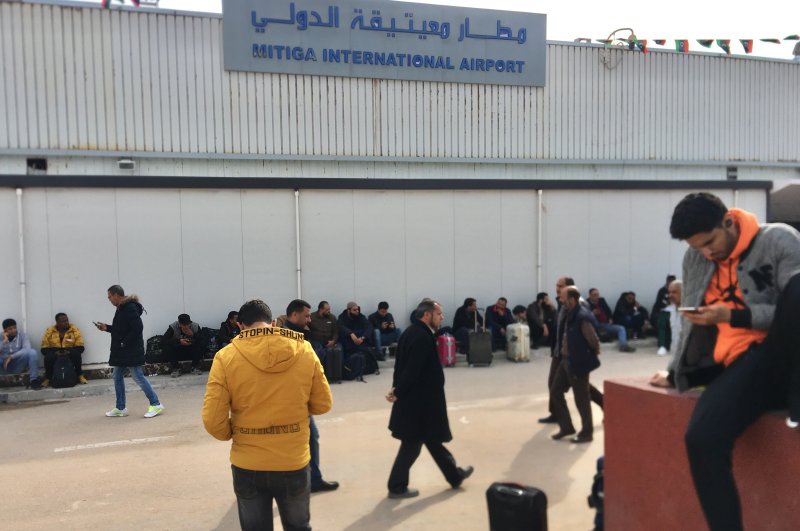 In a statement, the Tripoli-based internationally recognized Government of National Accord (GNA) said Mitiga Airport, open to civilian use, was hit by Grad missiles.

The attack is a "new and repeated violation of the cease-fire and a continuation of the Haftar militias' criminal record of targeting civilians," GNA said.

Following the attack, flights were suspended at the airport, according to a statement on the Facebook page of the GNA-led Burkan Al-Ghadab (Volcano of Rage) Operation.

In a statement Thursday, the U.N. mission in Libya strongly condemned the continued violations of the cease-fire by Haftar forces, including the repeated bombing of Mitiga Airport.

The internationally recognized GNA has been under attack by Haftar's forces since last April, with more than 1,000 lives lost in the violence.

Meanwhile, U.N.-hosted talks between the warring sides in Libya that were supposed to start on Wednesday were clouded in uncertainty after the participants said they were staying away.

Rival Libyan politicians met on Wednesday for U.N.-sponsored political talks in Geneva aimed at ending the latest round of fighting over the country's capital, Tripoli.

Yet just hours later, the High Council of State, an advisory body to the legitimate Tripoli-based government, sent a letter to the U.N. mission demanding that talks be suspended until “concrete progress is made" in ongoing military negotiations.

In the east of the country, the spokesperson for the rival Tobruk-based House of Representatives also requested a postponement and said it would pull its participants.

In the wake of intensified international diplomatic efforts, the U.N. launched three parallel tracks of negotiations to push a cease-fire and resolve various crises in war-torn Libya.

Disagreements over the delegate list for Wednesday's talks swiftly surfaced, as rival officials objected to the last-minute inclusion of several independent politicians in the Tripoli delegation.

“We stress our agreement to choosing the group of additional representatives...to ensure it represents a cross-section of Libyan society,” said the High Council of State letter.

Ghassan Salame, the U.N. envoy for Libya, briefed a closed meeting of the U.N. Security Council late Wednesday by video after the Geneva meeting which he organized.

Diplomats said after the U.N. briefing that Salame told members the eastern delegation from Tobruk didn't show up in Geneva, and he urged countries with influence to pressure the delegation to attend the talks.

Earlier this week, the U.N. said military officials agreed on a draft cease-fire deal as they emerged from days of talks.

The declared cease-fire deal, now under review by Libya’s competing leaders, addresses the return of thousands of displaced civilians to Tripoli. But it makes no mention of key points of contention, such as the withdrawal of eastern-based forces or the demobilization of formidable militias loosely allied with the U.N.-supported Tripoli government.

Some cast doubt on whether the draft agreement was the breakthrough that the U.N. and U.S. embassy hailed it to be.

“This draft is nonsense,” said Abdul-Qader Hwaili, a member of the High Council. “In actuality, we have seen no progress in the military track. We cannot continue with the political meeting until we see it."

Peace negotiations have made halting progress over past weeks, as low-intensity clashes continue around Tripoli and weapons flow into the war-torn country despite world powers’ pledges to the contrary at a peace summit in Berlin last month.