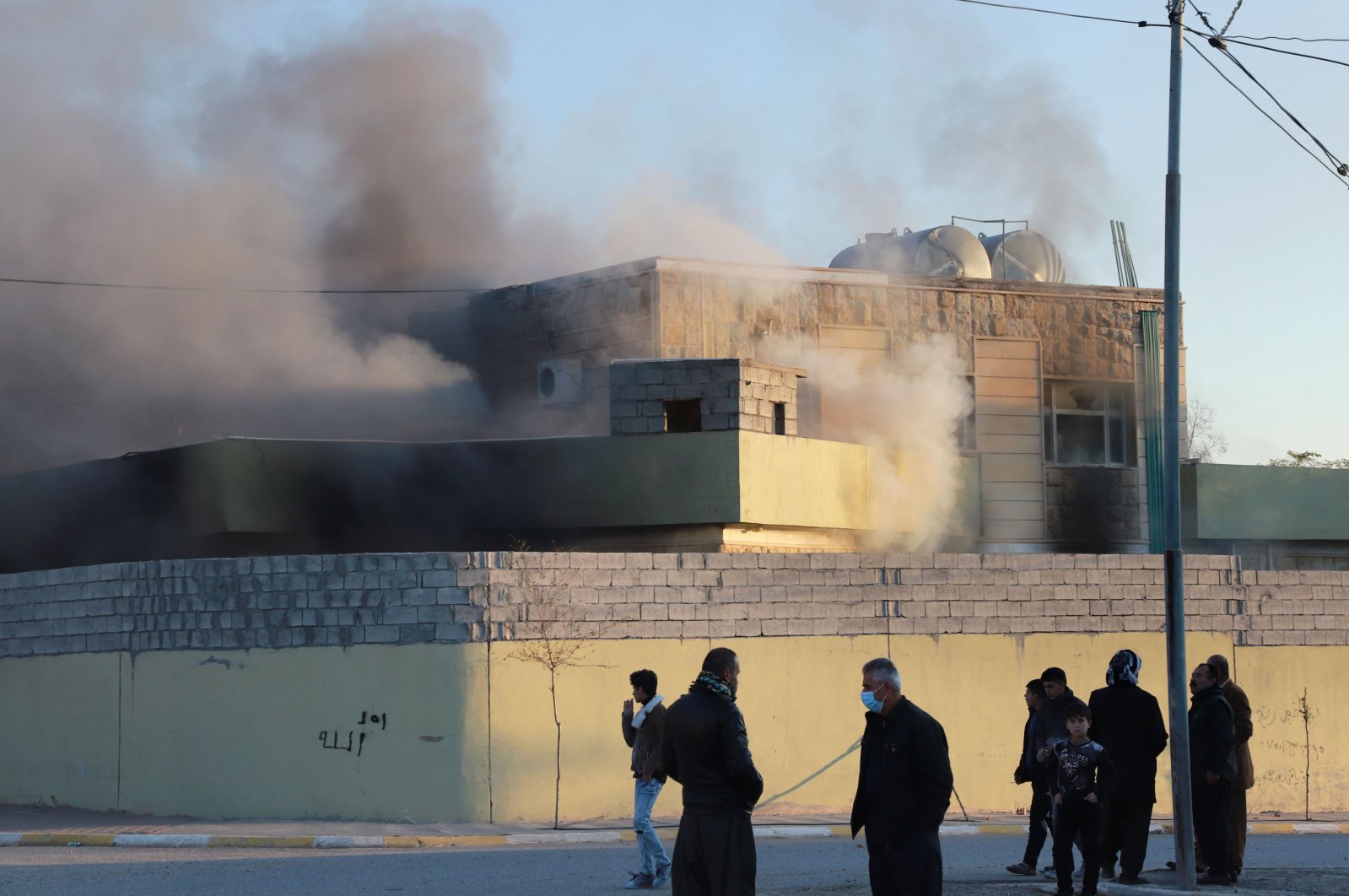 People stand outside a local police station set on fire by protesters in the town of Takia, about 60 kilometers southwest of the city of Sulaimaniyah, on Dec. 8, 2020. (AFP Photo)
by DAILY SABAH Dec 15, 2020 11:02 am
RECOMMENDED

In a phone call with U.S. Syria envoy Joel Rayburn, the two discussed the complex situation in Syria.

"The Prime Minister called for renewed efforts to free the SDF from PKK control and stop the group from exploiting foreign aid," the prime minister's office said in a written statement, referring to the YPG-dominated group in Syria that receives military aid from the U.S.

Although the U.S. recognizes the PKK as a terrorist organization, it denies the group's connection with the YPG despite the ideological and organizational links between the groups. Washington views the YPG as a "reliable partner" in its fight against Daesh terrorist group and continues to provide it with arms and equipment.

Barzani also strongly condemned the PKK's deadly attack on Peshmerga forces in Iraq's Duhok province on Sunday. He highlighted that three security personnel have now been killed by the PKK in recent months. The prime minister added that PKK’s behavior, including efforts to exploit peaceful protests, threatens regional stability.

Barzani and Rayburn also underlined that Daesh remains a threat.

A Peshmerga soldier was killed in a firefight with PKK terrorists in northern Duhok. The incident occurred when PKK terrorists traveling in a vehicle refused to stop at a checkpoint manned by Peshmerga forces in the Amedi district.

British Consul-General in Irbil James Thornton took to Twitter to express his condolences to the family of the soldier killed by the PKK.

"The PKK is a terrorist organisation that should not be present in the KRI (KRG)," he said.

The Iraqi central government and the KRG recently deployed some 6,000 security forces near the Sinjar area in a blow to the PKK terrorist group and the Iranian-backed Hashd al-Shaabi (Popular Mobilization Front - PMF) militants.

The Baghdad and Irbil administrations took the first step to eliminate the presence of PKK terrorists from the area where they established a second quasi-base beside their main headquarters in the Qandil mountains in northern Iraq.

However, Sinjar District Governor Mahma Halil said last week that there is no sign of withdrawal by PKK terrorists from the northern Iraqi district, adding that they are joining the Hashd al-Shaabi instead.

The Sinjar deal, inked under the auspices of the United Nations in October between the central government in Baghdad and the KRG on the status of the region, envisages clearing the region of the PKK terrorists.

Since the deal was inked, the PKK increased its attacks against the KRG and vital facilities in northern Iraq.

The PKK terror group managed to establish a foothold in Sinjar in 2014 under the pretext of protecting the Yazidi community from the Daesh terror group. Some 450,000 Yazidis fled Sinjar after Daesh took control of the region.

Suffering numerous attacks and a threat to its national security by the PKK, Turkey has welcomed the KRG and Iraqi central governments’ decision to boot out the terror group but still exercised caution and underlined it will pursue its ongoing military operations in northern Iraq.

The Turkish Armed Forces (TSK) regularly conducts cross-border operations in northern Iraq and has long stressed that it will not tolerate terror threats posed against its national security, calling on Iraqi officials to take the necessary steps to eliminate the terrorist group. Ankara previously noted that if the expected steps are not taken, it would not shy away from targeting terror threats, particularly in Sinjar.