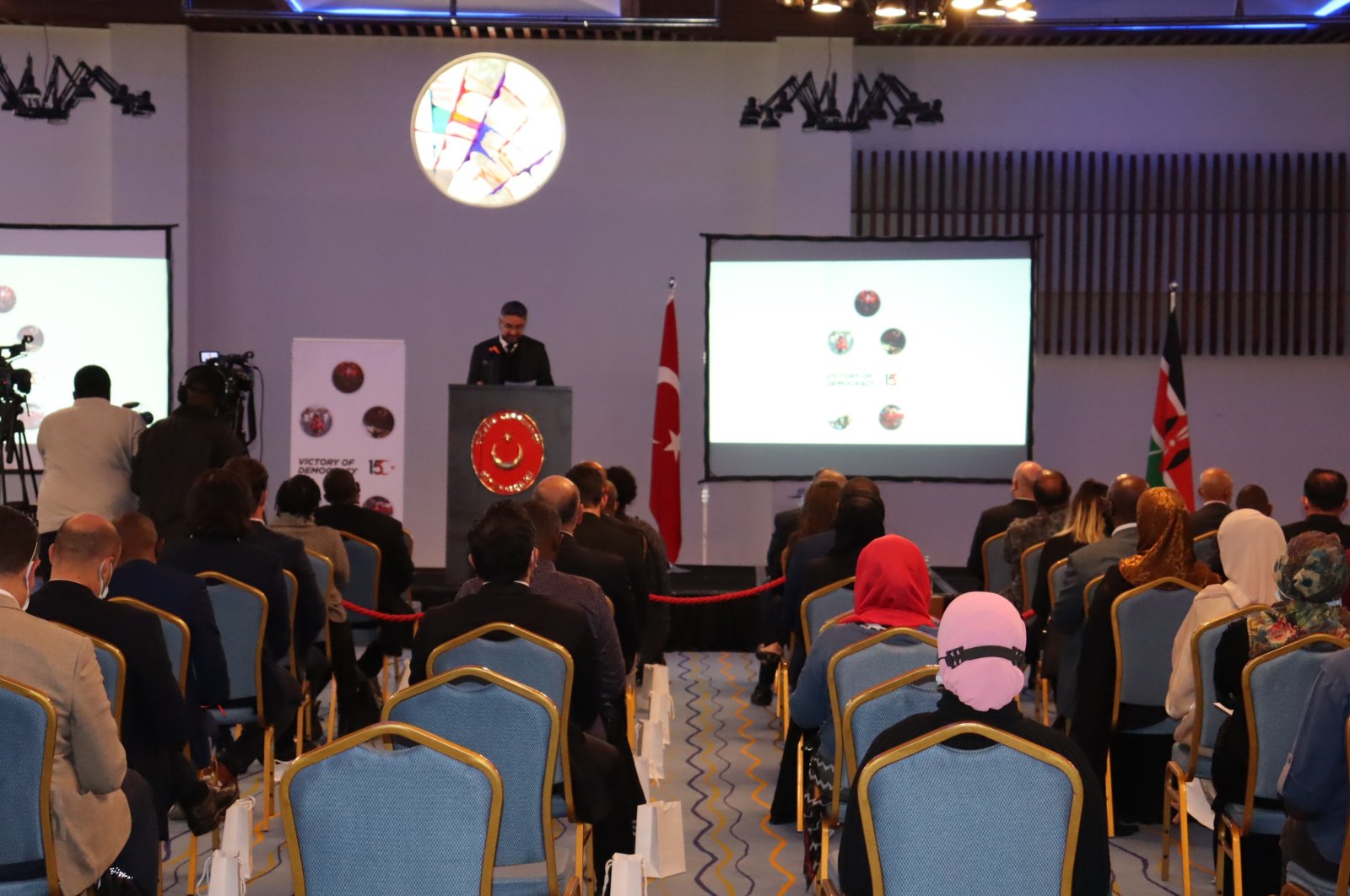 Hundreds of Kenyans, including officials and ambassadors, gathered Saturday in Kenya’s Nairobi to celebrate and honor those who lost their lives during the coup attempt in Turkey in 2016.

Dr. Abdi Issa, a Turkish graduate and deputy governor of Isiolo County in Kenya was also present at the event. Issa learned of the attack in Turkey by the Gülenist Terror Group (FETÖ) while conducting a complex surgery and was so shaken that he had to be replaced with another doctor. "I was working in a very busy hospital in London in an emergency and almost at midnight I heard people chatting about something happening in my country, Turkey," said Issa.

"They knew I was in London but trained in Turkey, I stopped and started investigating and I found that there was something very serious challenging the democracy of the very powerful nation of Turkey by a terrorist organization," he said.

Issa went to a mosque and started praying for the people of Turkey.

"Within two hours the people of Turkey came out in droves and numbers and stopped this coup against a democratically-elected country," he said.

Issa said he understood the pain of the Turks who strongly defended their nation because in Kenya terrorists who plague the Horn of Africa region conduct attacks, killing innocent people, including children.

Issa said he would defend his country with his bare hands if terrorists stormed the parliament and took control of the nation's national television station. He said after seeing what happened in Turkey, he would fight to protect his country from terrorists who were in tanks and armed to the teeth.

"Kenya was the first African country to condemn the coup in Turkey, as a Kenyan and someone who loves their country ... if the army came to bomb our parliament – those are terror activities, we will not accept – the population would wake up and they would fight with their bare hands to stop any kind of attack to the institution of democracy in our country," he said.

Issa said the world learned a very important lesson on matters concerning democracy during the failed coup and noted that "the power elected by the people can never be taken by few elements who have terroristic tendencies. Democracy is a tradition for all countries to strive for. It is a power of the people by the people, this is a lesson to us and the world in general that July 15 should never happen again in the history of the world."

Issa urged schools and institutions across Kenya and Africa that are supported by the FETÖ to be investigated and abolished.

"I think the organizations should be investigated and their curriculum should be checked to ensure they are not having a negative influence on innocent young minds. We are always against this, we want people to go to proper schools and learn about democracy," he said.

Turkish Ambassador to Kenya Ahmet Cemil Miroğlu thanked Kenya for standing with Turkey during the attempted coup, noting that Turkey will never forget the show of solidarity it received from Kenya. Miroğlu said terrorist groups such as FETÖ are hidden across Africa, disguised as schools and charities and he thanked African governments for investigating and closing those facilities.

"The organization which lost its backbone in Turkey has been trying to survive by making use of its structure abroad, thus fighting against the structures of FETÖ abroad has gained significance," he said.

Turkish Cooperation and Coordination Agency (TIKA) Nairobi coordinator Eyüp Yavuz Ümütlü who was at the event told Anadolu Agency (AA) that people who heard the talk found it very informative and said it "opened their eyes."

Turkish Maarif Foundation Kenya Director Adem Koç said that it had 359 educational institutions in 44 countries –19 in Africa – with a total of 41,000 students.

"In many countries, hundreds of schools formally affiliated to FETÖ have been taken over by the government and handed over to the Maarif Foundation," he said. "In Africa particularly, these transfers have eliminated the lobbying of the FETÖ terror group which uses its schools as cover for its dangerous motives," he explained.