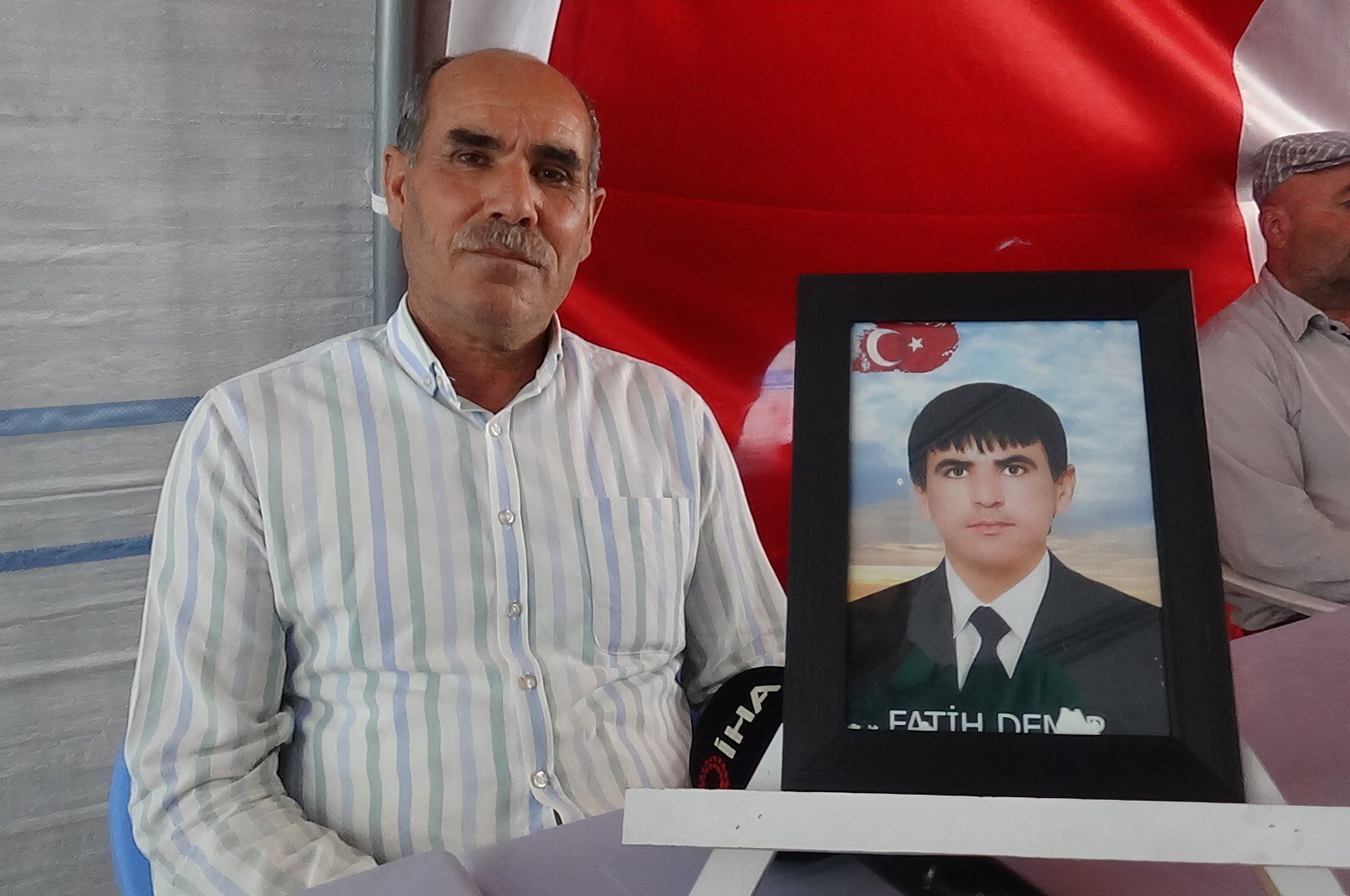 Father Abdullah Demir sits beside a picture of his son Fatih Demir in front of the pro-PKK HDP headquarters in southeastern Turkey, Aug. 2, 2021. (IHA Photo)
by DAILY SABAH
Aug 02, 2021 1:50 pm

Families protesting in front of the pro-PKK Peoples’ Democratic Party (HDP) headquarters in southeastern Turkey’s Diyarbakır province urged their children to ignore the terrorist propaganda and lay down their weapons and return home, as they reiterated their determination to protest until all of them have come back.

Father Abdullah Demir called on his son Fatih Demir to flee from the terrorists, reassuring him that he would not be forced to serve a prison term.

Noting that the terrorists lie to recruits by claiming that they will be imprisoned if they returned to Turkey, Demir said it was not true, as 30 children who surrendered were handed over to their families.

“We are not leaving this place until we get our children back,” Demir said, as the protest marked its 700th day.

The distraught father’s son had been abducted by the PKK back in 2015 when he was working at a bakery.

The first protest started when mother Hacire Akar launched a sit-in protest on Sept. 3, 2019. Akar filed a criminal complaint against HDP members and said she would continue her protest until her son was handed over to her. Soon after, more families who were encouraged by Akar's bold stance joined her in seeking out their missing children. Her son’s return home in August 2019 gave hope to other families, and since then, the number of protesting mothers has grown as they demand the return of their children, who they say were deceived or kidnapped by the terrorist group. Since their sit-in protests began on Sept. 3, 2019, 15 families have been reunited with their children, while others still wait longingly to embrace their children again.

A significant number of suspected terrorists have started fleeing the PKK and surrendering, while many terrorists lack the courage to leave the group because they fear severe punishment if caught. The dissolution of the PKK has accelerated due to Turkey's successful counterterrorism operations and strategies both at home and abroad. In recent years, Turkey has seen record numbers of PKK terrorists giving themselves up in the face of determined domestic and cross-border counterterrorism operations.

The families called on their missing family members to surrender to security forces.