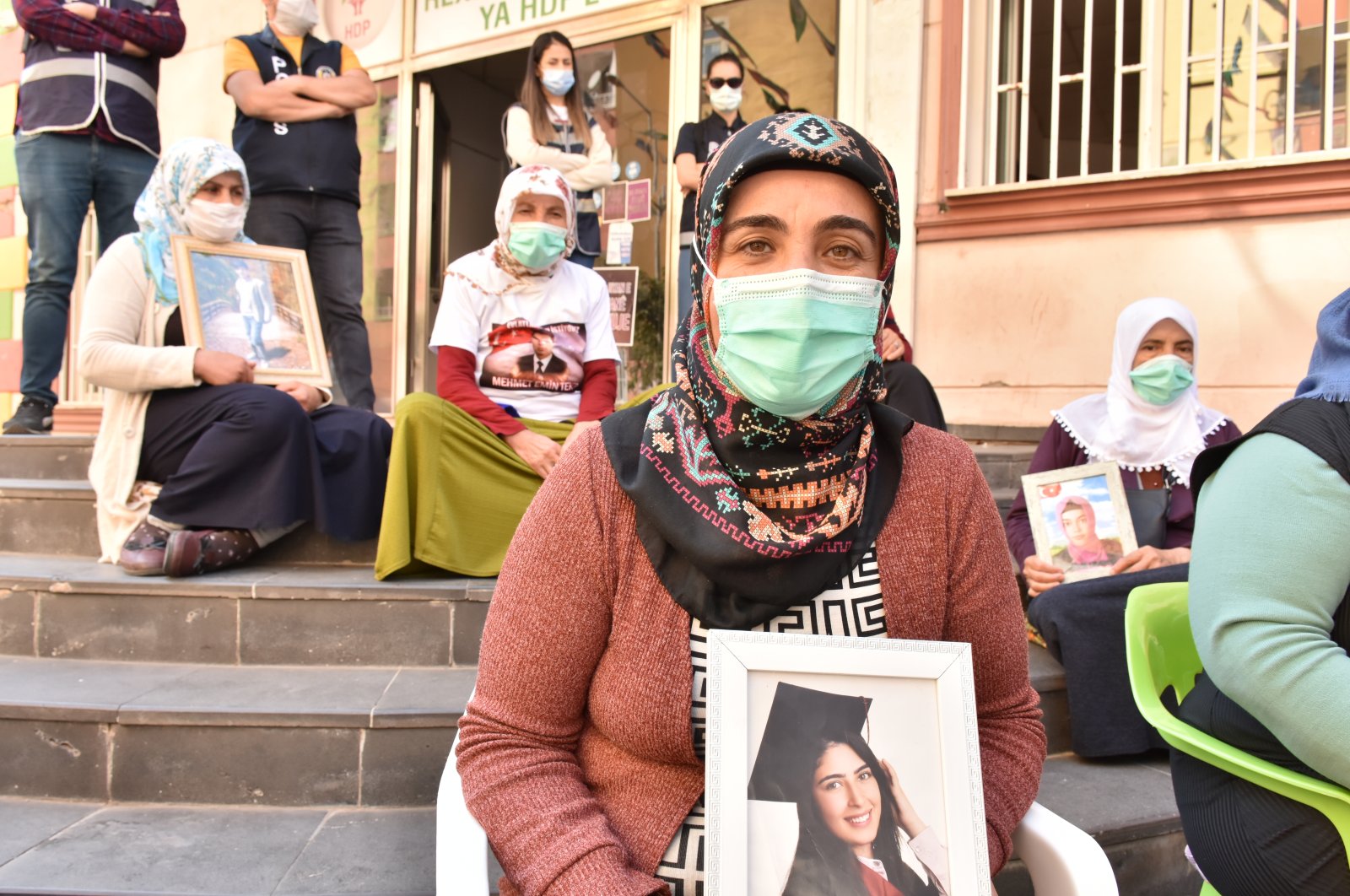 Türkan Mutlu holds onto her daughter Ceylan's picture during a sit-in protest in front of the HDP headquarters in Diyarbakır, Nov. 2, 2020. (AA)
by DAILY SABAH WITH AA Nov 02, 2020 11:06 am
RECOMMENDED

A mother in Turkey's southeastern province of Diyarbakır was hopeful of providing her young daughter with a quality life, working double shifts so her child could enroll in college, but her dreams were dashed after the PKK terror group forcibly recruited the girl seven years ago.

Türkan Mutlu joined dozens of families staging a protest outside the Diyarbakır office of the pro-PKK Peoples' Democratic Party (HDP), which they accuse of brainwashing and indoctrinating their children to join the ranks of the PKK.

"I never had the opportunity to go to school and get a proper education as my parents did not have this mentality, but I wanted my daughter to stand on her own feet," said Mutlu, referring to Ceylan Tekin, who was forcibly recruited by the terror group in 2013.

According to Mutlu, Ceylan was a brilliant student who completed her education at a top-notch high school, successfully passed a university entrance exam and was planning to enroll in the Sociology Department at Turkey's Balıkesir University. Mutlu was ecstatic as her efforts were finally about to bear fruit. But in the ensuing days, her life was turned upside down when she learned that her 17-year-old daughter had been taken to the mountains by the PKK.

"I worked various jobs to be able to provide for my children so they would not face the difficulties I experienced in my life. I would clean houses, paint houses, simply do anything I could do," she said, adding that she got divorced 12 years ago and had to shoulder the financial responsibilities of the family all by herself. "It felt like my dreams were stolen when I heard the news regarding my daughter and the PKK terrorists."

But Mutlu did not give up so easily and got in touch with the authorities in the hope that her child could be brought back. When things didn't work as she hoped, she took the matter into her own hands and traveled to northern Iraq, where the terror group is known to be active. Yet this did not lead to any tangible results and she failed to locate her beloved child.

"Then after a while, I saw my daughter on TV. She was wearing a PKK uniform and was in Syria, where there was this war going on," she said, alluding to the fact that her daughter had been forcibly recruited by the YPG, the Syrian offshoot of the terrorist group.

"I immediately went to Suruç (a Turkish district in Şanlıurfa province neighboring Syria) and spent 110 days in a mosque before learning I could not enter Syria due to the war."

The tearful mother was desperate as all her efforts were in vain and she did not hear from her daughter for years. But the protests by families outside the HDP office became a glimmer of hope for her and she quickly joined the protesting mothers, hoping her child would return as some of the families' efforts had borne fruit and their children had surrendered to Turkish security forces.

"Ceylan was like a mother, father, friend with whom I shared my joy and sadness. Her disappearance turned my life into a chamber of suffering. I hope not a single mother in this world would experience this pain. It hurts a lot," she said.

"She was supposed to be a student working hard for a better future, but her hands now hold weapons instead of pens and books."

Mutlu said she expected support from all around the world, especially that of mothers and said her protest did not have any political motivations.

"All I want in this life is the return of my child, nothing else."

Mutlu expressed that the HDP officials lectured about women's and human rights on television but the reality pointed to the contrary, as the party had played a significant part in her underage daughter's forced recruitment and the mothers at the protest were harassed by people linked to the HDP.

"I am determined to continue this protest as long as I'm breathing. I am not going anywhere until my daughter is back – mark my words!" she said. "Many people kidnapped by the PKK have surrendered to security forces, and I hope my daughter will soon join them," she added.