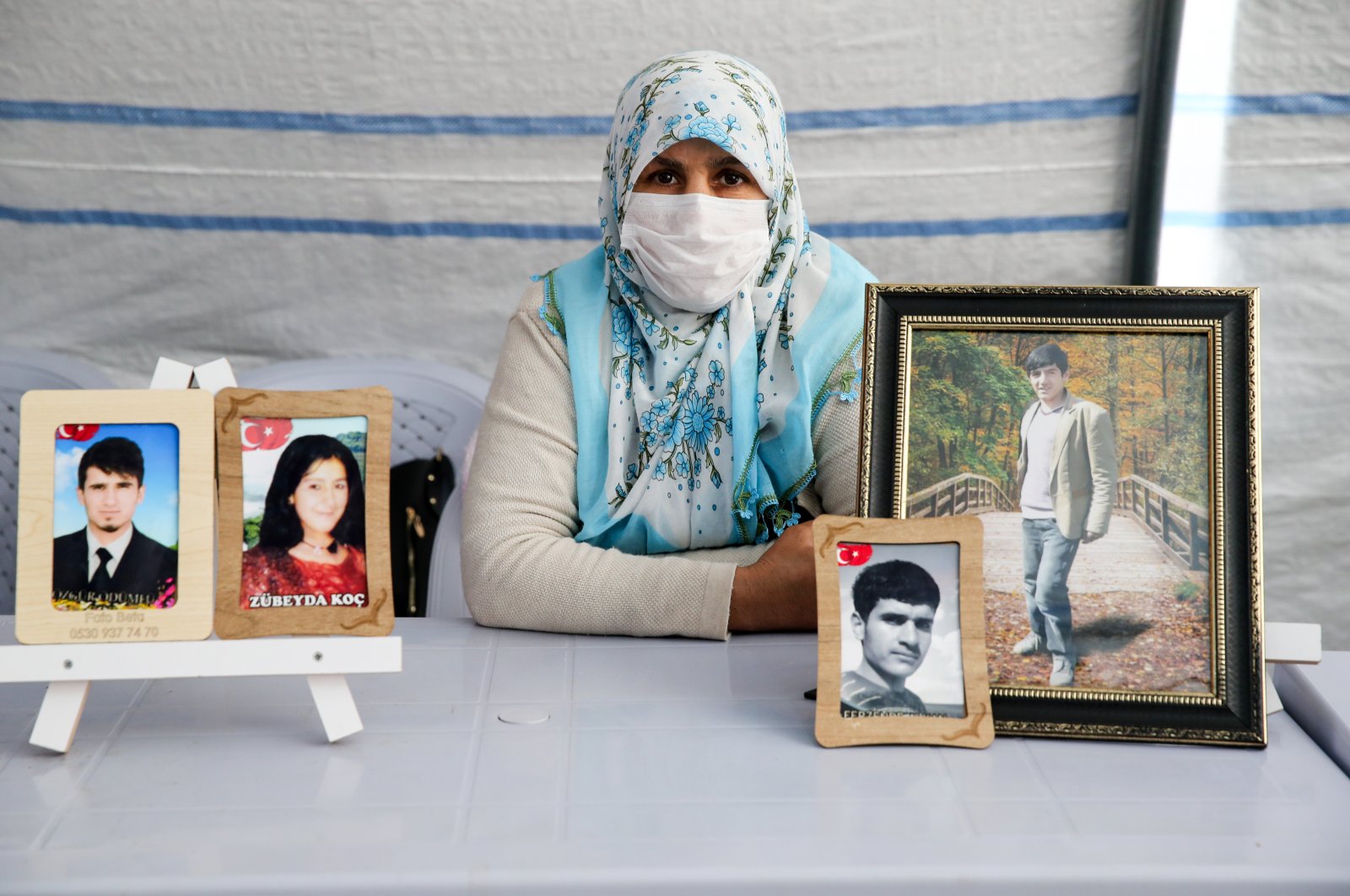 Mothers protesting PKK for the abduction of the children continue their fight against the terrorist group by adapting the way they protest to the newly established coronavirus measures, Saturday, March 28, 2020. (AA)
by Daily Sabah with Agencies Mar 29, 2020 2:24 pm
RECOMMENDED

As the Kurdish mothers' protest enters its 209th day, families continue to protest the abduction of their children by the PKK, outside the People's Democratic Party (HDP) headquarters in the southeastern province of Diyarbakır. However, due to the outbreak of the coronavirus, the protest has gained an added twist over the past week, with the mothers beginning to conduct their protest in line with the new measures taken to fight against the pandemic.

Although normally sitting together in front of the party building, the mothers started to sit side-by-side, leaving a-meter-long (3.3-foot-long) space between each other. They have also started to wear gloves and masks to minimize any risks of contracting the virus. Mothers whose ages are above 65, on the other hand, have been sent to their homes since the risk is higher for them. The tent of the mothers is also being regularly disinfected.

This is the second time that the mothers' protest has been forced to evolve in accordance with the changing circumstances. Previously, with the coming of the winter, mothers stopped sitting on the stairs in front of the party building and moved to a tent to shelter from the cold weather. Despite all the difficulties, 134 families have been continuing their fight against the PKK and its brutalities with strong determination to take their children back.

Speaking on Sunday, one of the mothers, Kamile Küçükdağ, who joined the protest from Adana for her 20-year-old son Engin, said they will continue their protest no matter what.

Küçükdağ's son was kidnapped by the PKK five years ago. Calling on her son to escape from the terrorist group, Küçükdağ stated that she would not leave the picket line until she had secured his safe return.

"My son, come, surrender to our soldiers they won't cause you any harm. They (the PKK) lied to you," she said. "I missed you a lot."

The protest started when Hacire Akar turned up at the doorstep of the HDP's Diyarbakır office one night. A week later, on Sept. 3, 2019, families inspired by Akar transformed her solo stance into a collective sit-in protest. Akar's son Mehmet returned home on Aug. 24, showing people that there is still hope. So far, 13 families, including Akar, managed to reach back their children.