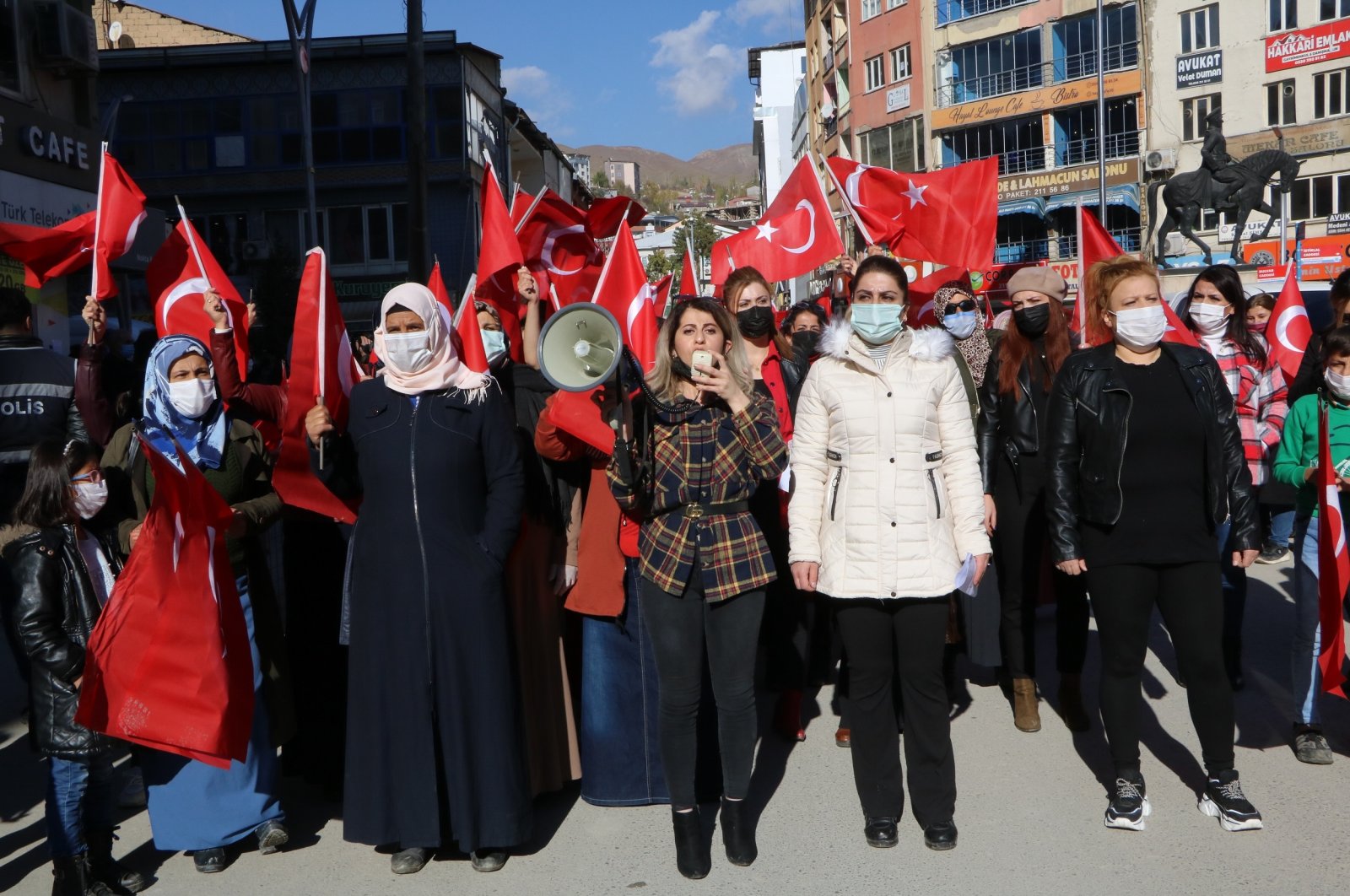 Kurdish mothers in Turkey’s southeastern Hakkari province staged a protest march Wednesday against the PKK terrorist group and its oppression.

The group marched with Turkish flags in hand and also demonstrated its support for the sit-in protest against the terrorist group in the southeastern province of Diyarbakır, which has been ongoing for over a year.

Gathering in front of a hotel in the city center, protesters chanted anti-PKK slogans and marched toward the pro-PKK Peoples’ Democratic Party’s (HDP) provincial office.

Making a statement there on behalf of the group, Elmas Adıyaman said that the main goal of the protest march was to support the Diyarbakır mothers.

She said that regardless of ethnic origin, every woman in Hakkari should support the mothers’ resistance against the PKK and help them make their voices heard.

Stressing that the group for years has been opposed to terrorism, which targets the country’s future, welfare, unity and solidarity, Adıyaman added: “Since this struggle was launched, we have gained nearly 200 children back. Gathering together and showing our unity, fighting for our kids and our future is a necessity for our consciences. We want the inexpressible pains of our geography to end. We call out to all of Turkey. The day is the day for unity and solidarity. Our people should wake up now and see the real faces of the PKK. Enough is enough," referring to the fact that nearly 200 PKK terrorists have surrendered to Turkish security forces in a year.

In its more than 40-year terror campaign against Turkey, the PKK – listed as a terrorist group by Turkey, the U.S. and the European Union – has been responsible for the deaths of 40,000 people, including children.

Meanwhile, another family on Wednesday joined the ongoing sit-in protest against the PKK in Diyarbakır, demanding the return of their abducted son.

The Diyarbakır protest started when Hacire Akar turned up at the doorstep of the HDP’s office one night after her son was abducted by the PKK. Akar’s son Mehmet returned home on Aug. 24, 2019, giving hope to other families.

Taking Akar's struggle as an example, three more mothers – Fevziye Çetinkaya, Ayşegül Biçer and Remziye Akkoyun – started a fresh sit-in in front of the HDP building on Sept. 3, 2019, and the protest has been growing day by day since then. The number of families coming from all over the country to protest the pain of being separated from their children exceeded 150.

Beyhan Dağyeli, whose son was abducted by the terror group six years ago when he was 22 years old, joined the sit-in protest on its 443rd day.

Dağyeli traveled from the eastern province of Bingöl to join the protest. "Enough is enough. We didn't bring up our children for this. ... I want him back," she said as quoted by Anadolu Agency (AA). She called on her son to surrender to security forces.

The HDP, long facing public reaction and judicial probes over its ties to the PKK, is under pressure from the growing civilian protest movement. Various groups from around Turkey have supported the Kurdish mothers in their cause, with many paying visits to show their support.

The Interior Ministry stated this week that the number of PKK terrorists who surrendered this year reached 202. Offenders in Turkey linked to terror groups who lay down their weapons and surrender to security forces are eligible for possible sentence reductions under a repentance law.

Two PKK terrorists who recently surrendered to security forces in the eastern provinces of Van and Muş told the truth of what goes on behind the scenes in the group.

One of them known as F.K., who joined the group’s camps in northern Iraq last year, said that the terror group spreads lies that the surrendered members are being tortured and their families are being treated poorly.

“If the ones in the mountain see that you share your food with me, they would leave and come,” he said.

The other surrendered member also expressed regret for joining the group and said that she wants to live under the Turkish flag.

She stated that she decided to join the group in 2011 when she was preparing for the university entrance exam.

“They sent me to rural areas in Erzurum and Tunceli. For a while, we received training on how to use weapons as well as ideological education. I participated in activities there since the spring of 2013.”