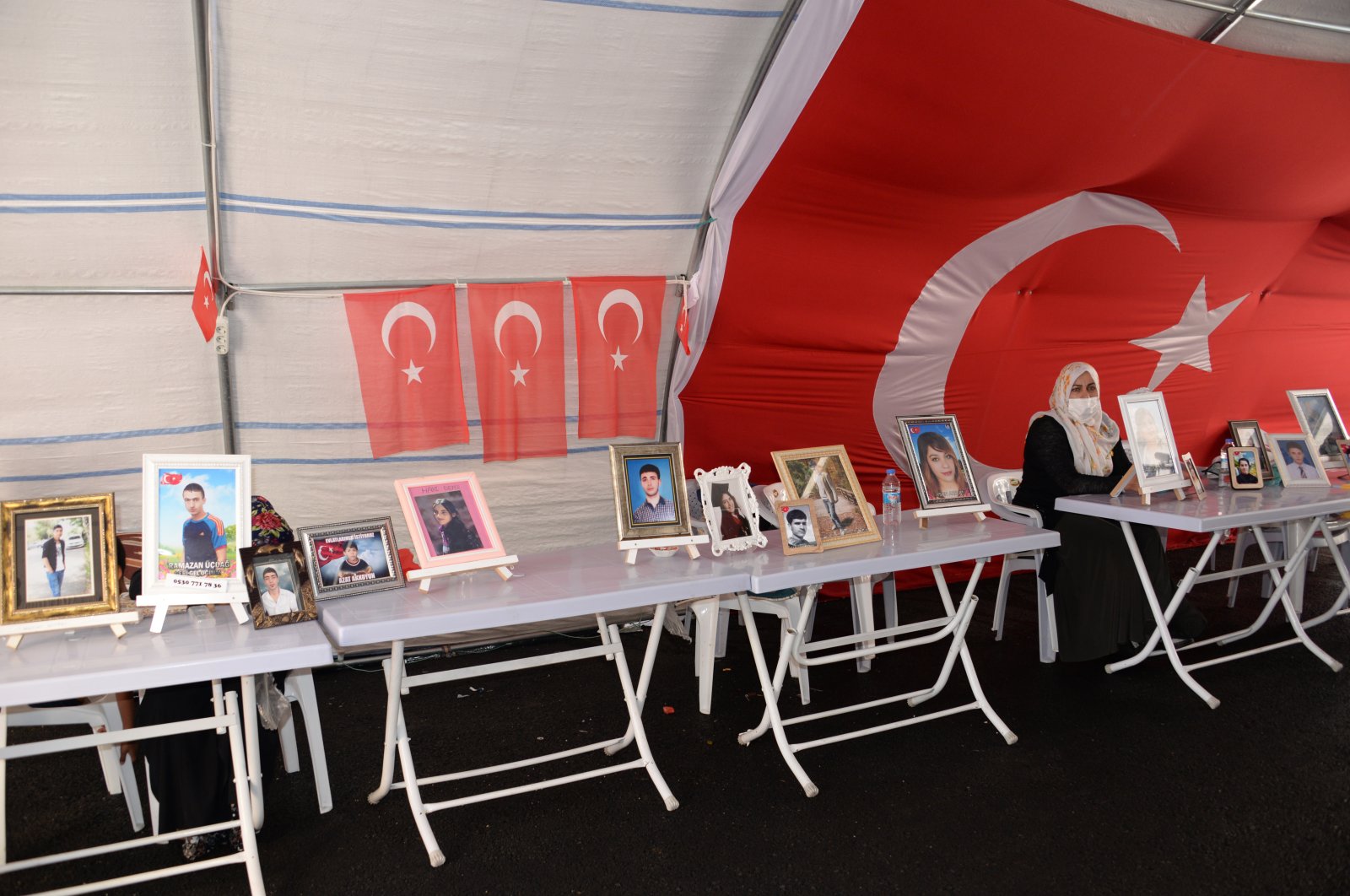 Kurdish mothers, who have been staging a sit-in protest against the PKK's abduction of their children, keep the protest spirit alive even at home, hoping for good news from their sons and daughters.

The mothers' protest has been ongoing for 10 months in front of the pro-PKK Peoples' Democratic Party (HDP) headquarters in the southeastern province of Diyarbakır. After spending the whole day in protest, when they finally get home, the suffering of the mothers continues as the remnants of their children fuel their sorrow, while others find peace in even smelling their children's belongings.

One of the mothers, Ayşegül Biçer, told Anadolu Agency (AA) that the abduction of her son interrupted family members' lives although they are still determined to get him back.

"I had one son and many dreams for him. He also had his own dreams. They broke our dreams, finished our hopes," she said.

Biçer stated that her suffering reached a point that she had to move from her house since everything there reminded her of him.

"I had to move from that house since I was constantly seeing his dream, hearing his voice. I kept all the belongings of him in the luggage, although I don't have the courage to look at them," she said.

"My heart has been burning out of missing my son," the sorrowful mother underscored, demanding justice against the terrorist group.

"We have been sitting here to break the hopes of the ones who have broken ours," she continued, adding that they all have been protesting not only for her own child but also for the others who suffer at the hands of the terrorist group.

Stating that she was "killed inside" when her son was abducted, Biçer said she is longing to see her son, who was abducted two years ago.

The protest started when Hacire Akar who turned up on the doorstep of the HDP’s Diyarbakır office one night. A week later, on Sept. 3, 2019, families inspired by Akar transformed her solo stance into a collective sit-in protest. Akar’s son Mehmet returned home on Aug. 24, giving hope to other families. Since then, the number of protesting mothers has grown as they demand the return of their children, who, they say, were deceived or kidnapped by the terror group.

Another mother, Fatma Akkuş, said that the world has turned into a place of torture for her since her daughter, Songül, was abducted.

"I always blame myself. I wish I didn't wake her up that day. I wish she would sleep all the time," Akkuş said.

Since her daughter was been abducted six years ago, Akkuş said that she not received any news about her, except for video footage that she saw two years ago.

"Four days after I watched the footage of my daughter, (the terrorists) came to my home. They told me that Songül was alive and with them. I told them that if she is alive, she should call me. They told me that the HDP sent them as its messenger, and they cannot provide such services for me. HDP has sold my life, my love, my everything," she emphasized.

The HDP is accused by the government of having links to the PKK. The protesting mothers claim the party is responsible for kidnapping or tricking their children to join the terror group. The HDP, long facing public reaction and judicial probes over its ties to the PKK, is under pressure from this growing civilian protest movement. Various groups from around Turkey have supported the Kurdish mothers in their cause, with many paying visits to show their support.

However, the international community remained largely ignorant to the families’ struggle against terrorism while some ambassadors to Ankara paid the families a visit.

Akkuş added that she cannot stand to see her daughter's pictures because they make her feel terrible with a constant desire to cry.

"The phone is ringing, the door is being knocked on in the night, and I always assume that he has returned," said Sariye Tokay, another mother who lost her son Mehmet to the PKK nine years ago.

Blaming HDP for her suffering, Tokay expressed that she even went to Iraq to try to locate her son, but in the end, she found nothing.

Carrying the gifts her son gave to her and his school tie with her at all times, she stated that she finds peace in these belongings.