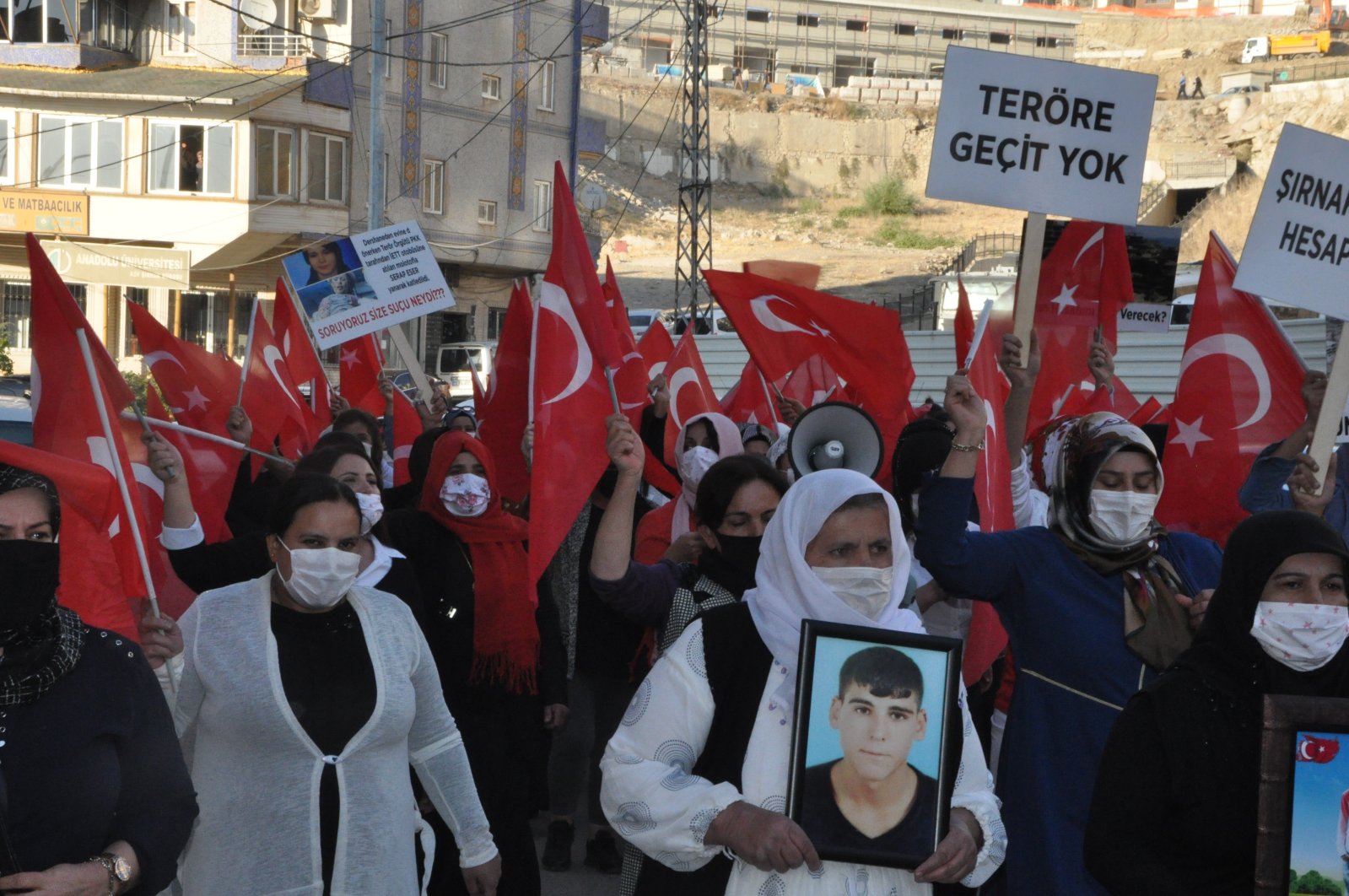 Kurdish mothers stage a march against the PKK terrorists who either abducted or killed their family members in Şırnak, southeastern Turkey, Oct. 16, 2020. (IHA Photo)
by DAILY SABAH WITH AA Oct 16, 2020 10:24 am
RECOMMENDED

Kurdish mothers whose children were abducted, families who lost their loved ones in terrorist attacks and families of veterans of Turkey's war on PKK terror staged a protest Thursday in southeastern Şırnak province.

They gathered in front of the provincial headquarters of the Peoples' Democratic Party (HDP), which is known for having links to the PKK terrorist organization.

The families condemned terrorist organizations, carrying photographs of their children abducted by the terrorists and banners that read "Women in Şırnak call terrorists to account."

Hamdiye Aslan, a mother whose 14-year-old son was abducted by terrorists five years ago, said they will continue their protests every week, demanding their children back from the HDP.

"They took our children away. We want them to bring them back," she said.

"I've been yearning to see my son's face, to hear his voice for five years. How can they (the terrorists) ever pay for what they did?"

Esra Birlik, whose father was killed by PKK terrorists 31 years ago, said she grew up as an orphan and wanted the mothers' tears to dry.

"This country, this flag belong to all of us. We are all brothers and sisters. What is it that we cannot share? We will fight for out martyred ones and our flag," she said.

The demonstrators condemned both the PKK and the HDP and expressed their support for Turkey's anti-terror operations.

While the protest received support from the locals, the HDP members at the headquarters have done their best to drown out the voice of the mothers by turning up the volume of the music to the maximum.

The protest in Şırnak is not the first reaction of Kurdish mothers against the brutalities of the PKK. A group of aggrieved families has been staging a sit-in protest against the PKK in southeastern Diyarbakır province, in front of the HDP headquarters, for over a year.

Hacire Akar, who claimed her son was kidnapped and brought to the mountains by the PKK and its Syrian wing the YPG, started a sit-in protest in front of the Diyarbakır headquarters of the HDP on Aug. 22, 2019. After she was reunited with her child on Aug. 24 as a result of her determined struggle, other mothers began to gain hope.

Taking Akar's struggle as an example, three more mothers – Fevziye Çetinkaya, Ayşegül Biçer and Remziye Akkoyun – started a fresh sit-in in front of the HDP building on Sept. 3, 2019, and the protest has been growing day by day since then. The number of families coming from all over the country to protest the pain of being separated from their children reached 150.