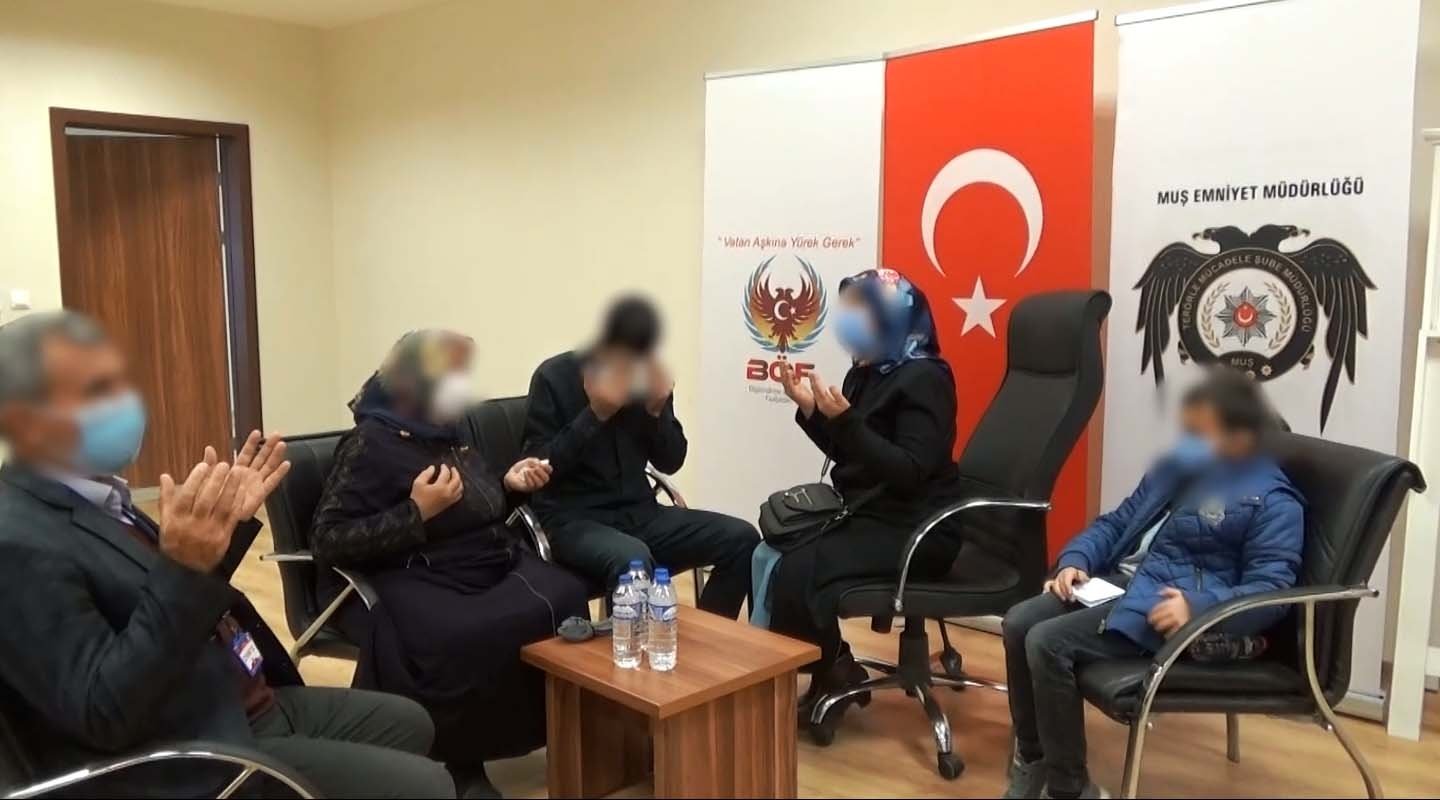 More families reunited with their children recruited by the PKK terrorists, after surrendering to Turkish security forces in the eastern Van and Muş provinces.

The anti-terror teams traveled through villages and neighborhoods in Muş on the orders of Governor Ilker Gündüzöz to reunite children – who were deceived by the PKK terror group – with their families. The teams have visited a total of 350 families so far.

With their persuasion efforts, many children have been reunited with their families.

After six-month-long persuasion efforts of the police teams, 26-year-old F.K., who joined the terrorist organization in the Zaho and Gara regions of Iraq last year, was rescued from the terror organization.

Having had a hard time in the PKK camps for a year, F.K. fled the terrorist organization and surrendered to security forces at the Habur Border Gate in the Silopi district of Turkey's southeastern Şırnak province on Nov. 17.

Being brought to Muş by police teams, F.K. reunited with his family at the provincial police department. The regretful child's family burst into tears when they saw their child.

F.K., who surrendered to Turkish security forces, said he was happy to be reunited with his family as part of the persuasion efforts of the security teams.

"If those on the mountain saw that you (Turkish security forces) shared your bread and water with me, they (terrorists) would all leave (the PKK). PKK tells us lies that our families are mistreated in Turkey and being tortured. But when I saw that you are so close and have warm relations with my family, I even curse more for each day I was there (with the terrorist organization)," he said.

"I've seen here that you think about me and my family more than I do. I grew up in a Muslim family and noticed that I was deceived when I saw slanders and curses against the (Muslim) Prophet Muhammad and Allah," he added.

He went on to say that he contacted his family before making the decision to escape, adding: "If the members of the terrorist organization talk to you (Turkish security forces) once and get to know you, none of them would live in the mountains and (they would) surrender to the security forces."

"If they saw the efforts of the police, they would understand what kind of deception they are in," he underscored.

Mother E.K. noted that she was so happy to be reunited with her son, saying: "The police told me that they will bring my son from the mountain, I have always waited for this day and now I have my son back."

Father R.K. said: "I couldn't sleep even a day during the period my son was in the treacherous anti-Kurdish terrorist organization. But now I'm relieved that he surrendered to security forces."

'I want to live under Turkish flag'

Another regretful terrorist, who surrendered to Iranian security forces and was sent to Turkey, said she regrets her decision to join the PKK terror group and that now she wants to live under the Turkish flag.

In her testimony to the public prosecutor in the Van province, she said she wanted to benefit from effective repentance law and gave detailed information about her process of joining the PKK terrorist group and attacks carried out by the PKK.

She said she decided to join the terrorist organization in 2011 with a girlfriend, also her flatmate, while preparing for the university entrance exam.

At first, they went to the provincial headquarters of the Peace and Democracy Party (BDP), she noted, adding that the same day, they were sent to an area – called the Kendal area by the PKK terrorist organization – in the southeastern Diyarbakır province.

"We were then sent to another area – called the Bingöl Celenk Point by the terrorist group. There were 15 of us. There, we received training to get to know the terrorist organization."

She said she received ideological training in the rural area of eastern Tunceli and Erzurum provinces and was given weapons and clothes there, adding that she was active there until the spring of 2013.

While she was active in the PKK in Tunceli in the summer of 2012, she said they were ordered to commit a terrorist act against the Geyiksu gendarmerie station in Tunceli.

divided us into two groups, I was in the second group, my job was to scout about the station. I was spying on the station from the mountain with binoculars, taking notes of the soldiers' movements during the day and transferring the information to the person codenamed Akif Guyi who was our (so-called) commander. Then the (planned) terrorist act took place," she said.

"I did not participate in the action, but I participated in the necessary preparations for about two weeks beforehand," she added.

She also noted that she just took part in one road blocking terror act in Tunceli after the attack to the gendarmerie station.

Saying that she decided to escape with other members of the terror group she met during her stay in Iraq, she added, "We fled on the night of Aug. 21, 2019, and surrendered to Iranian security forces. Our testimonies were taken there followed by our trial. They sent us (to Turkey) after we explained everything in detail."

"We said we want to surrender to Turkey and they handed us over to the Turkish security forces. I joined the PKK due to my ignorance, but I now want to live under the Turkish flag.

The protest started to spread to other provinces as well when Kurdish mother Emine Üstek launched a similar movement in southeastern Şırnak province on Sept. 17. Some relatives of those who were killed or injured by the PKK joined Üstek to support her protest.