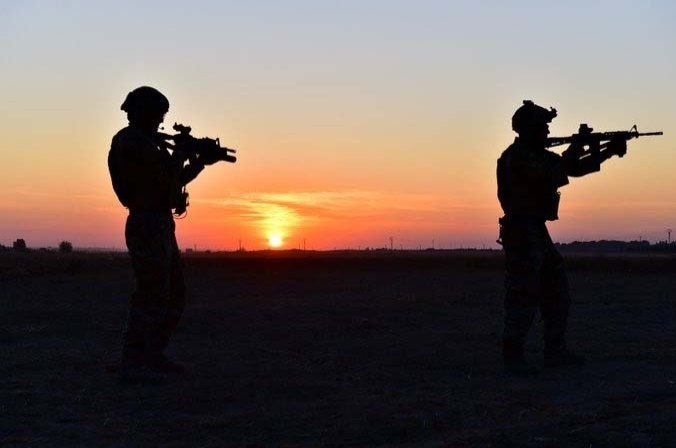 According to a statement by the Interior Ministry, three PKK terrorists were killed in an air-supported operation with an unmanned aerial vehicle (UAV) in the Andiçen neighborhood of eastern Van province's Çatak district.

One of the terrorists was identified as Vahiyettin Karay, codenamed Agit Civyan, who had been acting as the so-called regional field officer since 2019 and was listed in the red category of the Interior Ministry’s wanted list.

"The terrorist in question has been in the terrorist organization for about 25 years, is responsible for 60% of the domestic terrorists, personally participated in many operations in Van, Hakkari, Şırnak, Siirt, Mardin and Şanlıurfa, and gave the order for many bloody actions," the ministry said in a statement.

Karay was one of the terrorists who planned and carried out an attack that killed 12 soldiers in southeastern Hakkari province's Dağlıca village in 2007. He was also responsible for three other attacks on Turkish military forces in 2008 in the Yüksekova district.

The two other killed terrorists were Tekin Yıldırım, codenamed Canfeda Goyi, who was the bodyguard of so-called regional commander Fırat Şişman, and a terrorist codenamed Diren Amed, who was Şişman's bodyguard and correspondent.

Four more PKK terrorists were killed in two separate operations in southeastern Siirt province in the Mount Herekol region and their weapons were destroyed, the Interior Ministry said later Monday.

The Interior Ministry said the terrorists who surrendered in Şırnak had joined the PKK in 2014 and 2015 and had been operating in Iraq.

The family of one of the five terrorists has been protesting for the return of their child in front of the pro-PKK Peoples’ Democratic Party (HDP) headquarters in Diyarbakır province for 390 days.

The Defense Ministry said in a separate statement Sunday evening, "Two more PKK terrorists, one male and one female, surrendered by coming to our border station in the Nusaybin district of Mardin."

The ministry said PKK terrorists continue to surrender thanks to the determined operations of the Turkish Armed Forces (TSK).

About 170 PKK terrorists have surrendered since Jan. 1, amid persuasion efforts carried out by the General Directorate of Security and the Gendarmerie General Command.

Turkish security forces regularly conduct counterterrorism operations in the eastern and southeastern provinces of Turkey where the PKK has attempted to establish a strong presence and bases. The TSK also carry out cross-border operations in northern Iraq, a region where PKK terrorists have hideouts and bases from which to carry out attacks in Turkey.