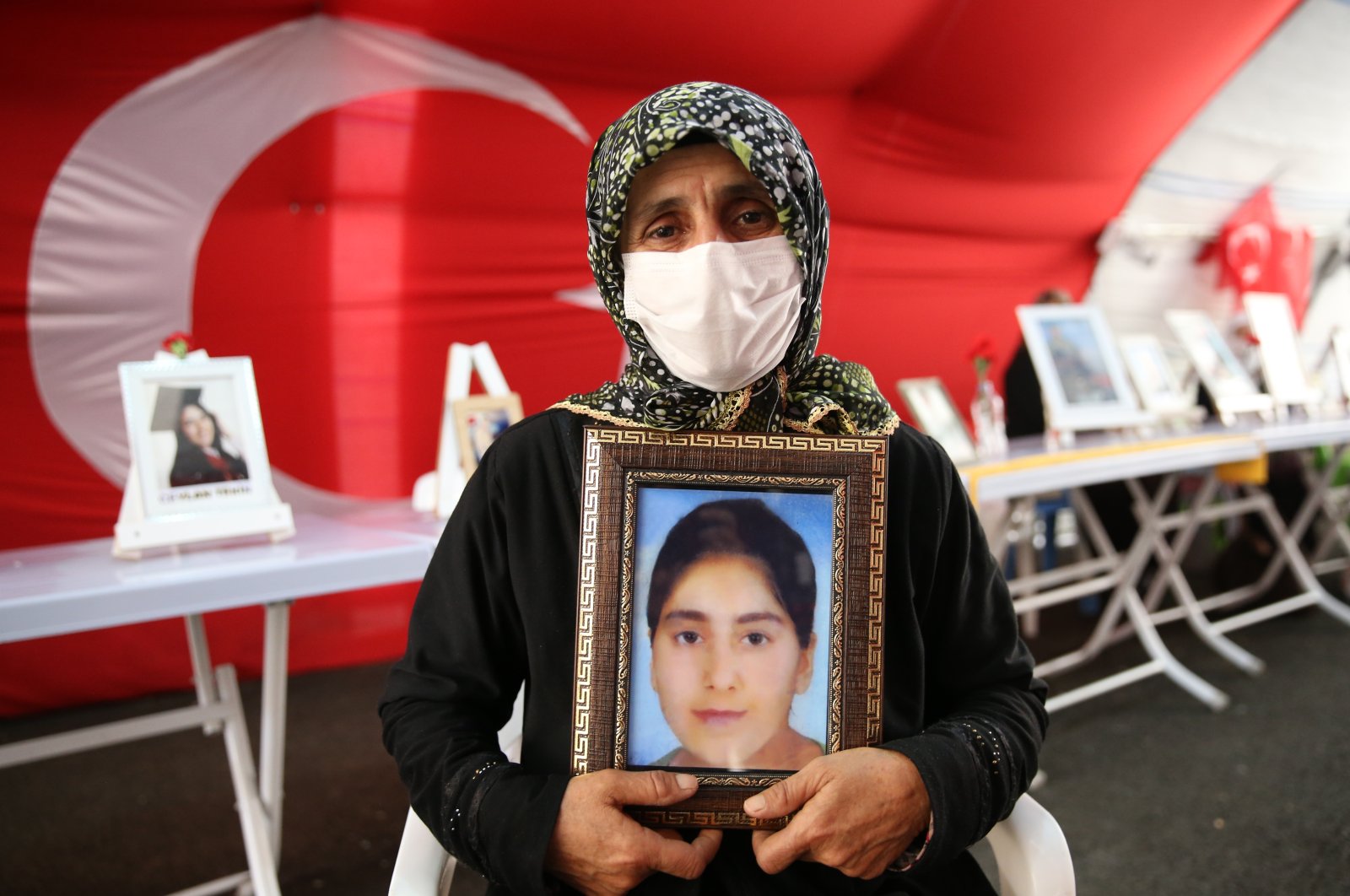 Esmer Koç, whose daughter was abducted by the PKK, joins the sit-in protest against the terrorist group in Turkey's southeastern Diyarbakır province, Nov. 14, 2020. (AA Photo)
by DAILY SABAH WITH AA
Nov 15, 2020 11:02 am

As families continue their sit-in protest against the PKK terrorist group in Turkey's southeastern Diyarbakır province, one teary-eyed mother damned the group for abducting her child to potentially be used as a suicide bomber.

Esmer Koç told Anadolu Agency (AA) her daughter Zübeyde was abducted in 2013 at the age of 15 and she has not heard from her child since. She is worried because her daughter is mentally disabled and is hearing impaired.

"My daughter is mentally handicapped," said Koç, who fears her daughter could be manipulated into becoming a suicide bomber – a treacherous method used by the PKK terrorist group to target Turkey.

"I have had no news from my daughter since she left. I do not even know whether she is alive or not," she said. "I am afraid the (PKK) would make her a suicide bomber."

Koç said she worked day and night to provide a better life for her children but the PKK "stole her future" when she learned Zübeyde was forcibly taken into the ranks of the terrorist group.

"Our peace at home has left us since she disappeared; I do not even want to eat or drink ... I want my children brought back," she said, noting that kidnapping children is a strategy used by the terrorist group to brainwash children into becoming new members.

Zübeyde's brother, Doğan, 16, said his family was devastated when she was abducted, and it turned the lives of the entire family upside down.

"My mother does not want to eat or sleep. This incident has significantly affected our family. My brothers always get upset. My family does not let me go anywhere without permission for fear (of the PKK)," he told AA.

Through tears, he said he wanted to be a member of law enforcement and fight the PKK terrorist group so mothers would not be left without children.

"I joined this protest along with my mother in an effort to help and support the protesting families," he said. "The enemy (PKK) will lose this fight. The families are determined and will not go anywhere before getting their children back. I will have my sister back as well, I hope."

Those who played a role in Zübeyde's abduction were given prison time, according to her mother, who firmly believes her daughter will return soon.

The group of aggrieved families has been staging a sit-in protest against the PKK terrorist group for over a year. Hacire Akar, who claimed her son was kidnapped and brought to the mountains by the PKK, started a sit-in protest in front of the Diyarbakır headquarters of the pro-PKK Peoples' Democratic Party (HDP) on Aug. 22, 2019. When she was reunited with her child on Aug. 24 as a result of her struggle, other mothers gained hope.

Taking Akar's struggle as an example, three more mothers – Fevziye Çetinkaya, Ayşegül Biçer and Remziye Akkoyun – started a fresh sit-in in front of the HDP building on Sept. 3, 2019, with the protest growing day by day since then. The number of families coming from all over the country to protest the pain of being separated from their children has reached more than 150.

Offenders in Turkey linked to terrorist groups who lay down their weapons and surrender to security forces are eligible for possible sentence reductions under a repentance law.