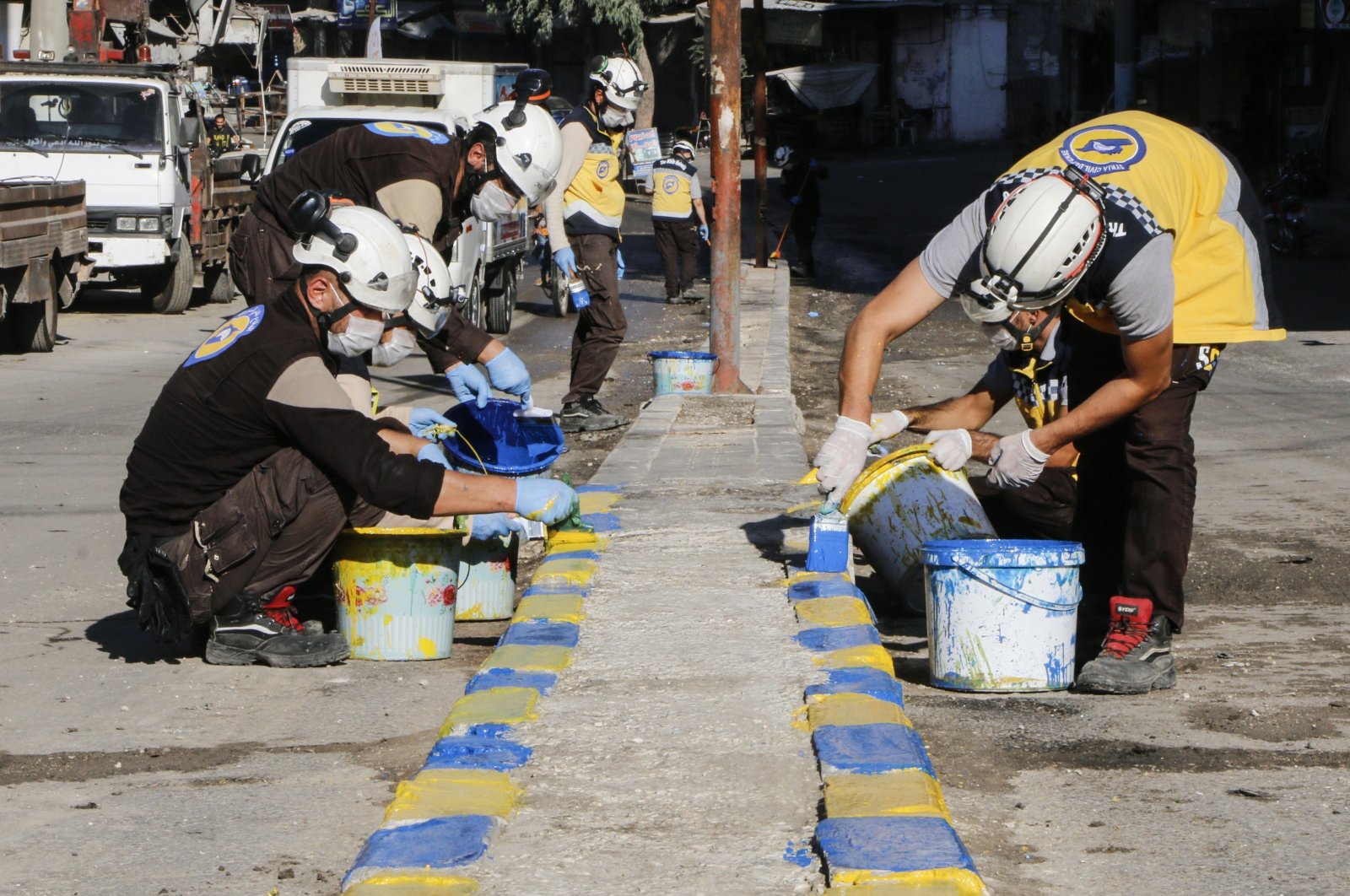 Northern Syria's recovery process from its almost a decadelong civil war continues thanks to the efforts of humanitarian groups and Turkey.

Some of the most intense rehabilitation is taking place in Idlib province by the White Helmets, officially the Syria Civil Defense, which operates in streets wrecked by years of heavy regime bombardment.

Launching a new campaign called "The hope of the ones who return home" in the province's town of Ariha, the group aims to clean up remnants of the war and beautify roads.

A media and communications officer of the White Helmets, Hassan al-Ahmad, said that the group wants to provide clean streets while also removing any feature that reminds of the horrifying memories of the war for displaced Idlib locals who are now gradually returning to their hometown.

Speaking to Anadolu Agency (AA), al-Ahmad stated that currently, they have 35 volunteers and 15 heavy construction units working on the campaign. He explained that they are cleaning the debris from damaged houses and painting flagstones.

Since March, when an agreement between Ankara and Moscow was brokered, more than 200,000 displaced people have returned to Idlib, while nearly 800,000 more have not yet come home.

Turkey and Russia, which back opposing sides in Syria's war, agreed on March 5 to halt military activity in the northwestern region after an escalation of violence displaced nearly a million people and brought the two sides close to confrontation. The deal addresses Ankara's main concerns, stopping the flow of refugees and preventing the deaths of more Turkish soldiers on the ground.

As part of the agreement, Turkish and Russian forces have been carrying out joint patrols along the M4 highway linking Syria's east and west and have established a security corridor on either side of it.

Although the region has been relatively peaceful in accordance with the deal, there are still occasional attacks recorded by both the Syrian regime and its backers Russia and Iran.

Idlib is not the only northern Syrian region working to leave the war behind. In the liberated town of Tal Abyad, after years of suffering, locals are finally getting back their basic infrastructure necessities, including access to water. Thanks to Turkey's drilling work in the region and the strengthening of existing water tanks, 138 villages now have water there.

Living under YPG/PKK occupation for years, the people of Tal Abyad who were "lucky" enough not to be forcibly displaced, had to suffer from a lack of water since their permanent storage tanks were damaged by the terrorists. According to the Demirören News Agency (DHA), the YPG/PKK would then bring tanker trucks and sell water to the locals, who were then unable to afford the costs of irrigating their agricultural fields.

After their liberation from the YPG/PKK terrorists, people expressed their water concerns to the Tal Abyad local council, which brought the request to the attention of Turkey's State Hydraulic Works (DSI). Upon learning of the appeal, DSI conducted drilling works in the rural areas of Tal Abyad, opened water wells and provided the life-giving resource to the region. Finally having water after years of longing, locals expressed their gratitude to Turkey for its efforts.

Abdollah al-Ayan, the head of the water management department for the Tal Abyad local council, stated that thanks to Turkey's work, the area has finally returned to its good old days. Expressing that townsfolk have been relieved since the terrorists were eliminated, al-Ayan said displaced locals are also returning and the city center is starting to be revived.

"Our agricultural fields could not be irrigated for years. Terrorists were demanding from people in here to be hungry and bow to its authority. Even the drinking water was being brought within the tankers and sold to people in exchange for money," he said. "Now people are very cheerful. We cannot express the happiness of the people that reached water after years of longing. We are all grateful to Turkey."

Drilling work in the liberated town continues, while there are also plans for the whole region to get back its water supply.

Tal Abyad is populated mostly by Arabs and was occupied by the Daesh terrorist group in 2014. A year later, the YPG/PKK took control of the town with the support of a U.S.-led coalition. Tal Abyad was later cleared of terrorists by Turkey's Operation Peace Spring on Oct. 13, 2019.

People living in areas held by the YPG have long suffered from its atrocities, as the terrorist group has a notorious record of human rights abuses, ranging from kidnappings, recruitment of child soldiers, torture, ethnic cleansing and forced displacement. While the YPG increased its oppression ahead of Turkey's cross-border operation, they planted explosives and converted many schools and other public buildings into military bases, with some even hosting tunnels for terrorists to hide in and escape.

After liberating the town from the YPG/PKK last year, the Turkish military has been working to launch a normalization period in Tal Abyad, which borders the Akçakale district of Şanlıurfa province in southeastern Turkey. Since then, Turkish troops and organizations have implemented a wide range of measures to eradicate traces of terrorism in the freed community by repairing hospitals and schools, demining the region and most recently, providing vital COVID-19 aid.