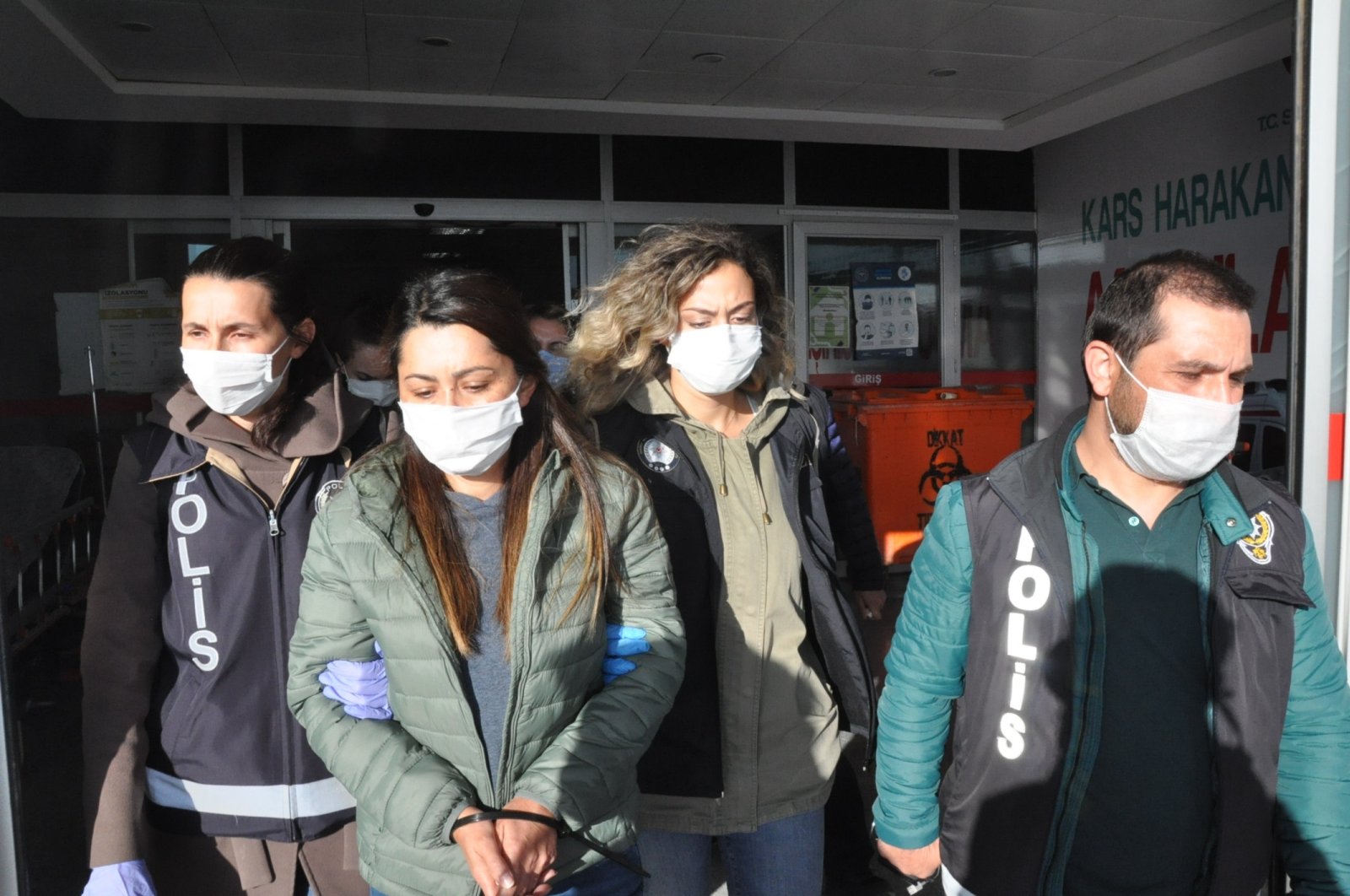 One of the suspects connected with the HDP's and PKK's misconduct in the Kars municipality is taken into custody by Turkish security forces, Kars, northeastern Turkey, Oct. 7, 2020. (AA)
by Daily Sabah with IHA Oct 19, 2020 12:04 pm
RECOMMENDED

The PKK terrorist group ran a system similar to a parallel state in eastern Turkey's Kars under a pro-PKK People’s Democratic Party (HDP) mayorship, an investigation run by a Turkish prosecutor's office revealed on Monday. A trustee was assigned to take over the mayorship on Oct. 2 after former Mayor Ayhan Bilgen was arrested last month.

Taking a so-called "Democratic Autonomy" strategy, the terrorist group was revealed to have formed village and neighborhood commissions in the province, as well as a justice commission to bypass the existing justice system, and conducted reconciliation and jurisdiction activities.

According to a recent investigation, the PKK terrorist group in Kars, in cooperation with the HDP, also transferred the money that was collected in Turkey and Europe as coronavirus-related aid to the relatives of arrested and convicted terrorists.

Explaining the reasons for the trustee assignment last week, Interior Minister Süleyman Soylu said there were an "attempt and several steps to form an autonomy-like structure" in the province.

"We, as the Turkish state, cannot allow such attempts," Soylu said.

During an operation on Oct.1, 21 suspected members or associated with members of the Kars municipality were detained. Some 16 suspects were arrested, including the co-mayor of the province, Şevin Alaca.

The investigation was initially launched into the pro-PKK Kobani revolts in 2014, leading to the dismissal of the province’s mayor, Bilgen, last month.

The decision came after a Turkish prosecutor prepared a detention warrant last week for 82 suspects, including several mayors, as part of an ongoing probe into incidents during the 2014 Kobani revolts. After a subsequent operation also took place on Oct.1, the state-appointed governor of the province Türker Öksüz temporarily replaced Bilgen as a trustee.

The HDP had won three metropolitan and five provincial centers in the 2019 local elections. Bilgen was the last mayor in charge with all others replaced in different investigations targeting the PKK.

The investigation into the issue continues as new details about the PKK’s ambitions in the province gradually emerge.

One of the freshly revealed details was the fact that the mayorship was employing the relatives of the dead or arrested terrorists, referring to them as "Value Family."

The provincial head of the HDP, Cengiz Anlı, was revealed to have an active role in these employment activities by the mayorship, despite not having any official duty in relation to the mayorship. Alaca also revealed to take part in efforts to employ the terrorists' relatives in the mayorship.

Manipulating the Turkish Red Crescent (Kızılay)'s campaign to collect money for the families who are victims of the coronavirus, PKK was revealed to have illegally incorporated a PKK-linked aid group into the process. This illegal involvement of the so-called aid group enabled the terrorists to transfer the collected money to relatives of the PKK terrorists.

The so-called court of the terrorist group, on the other hand, was functioning to bypass the citizens' links to the official judicial bodies. The investigation also found that the court was attempting to highlight the prestige of the terrorist group among the locals. The PKK-HDP partnership in the province went as far as to employ HDP deputies in the court to solve disputes.

The arrested suspects also revealed to take place in the so-called oath ceremonies of the newly recruited PKK terrorists in several recruitment centers that were established in some districts of Kars. The suspects were also providing livelihood to the terrorists.