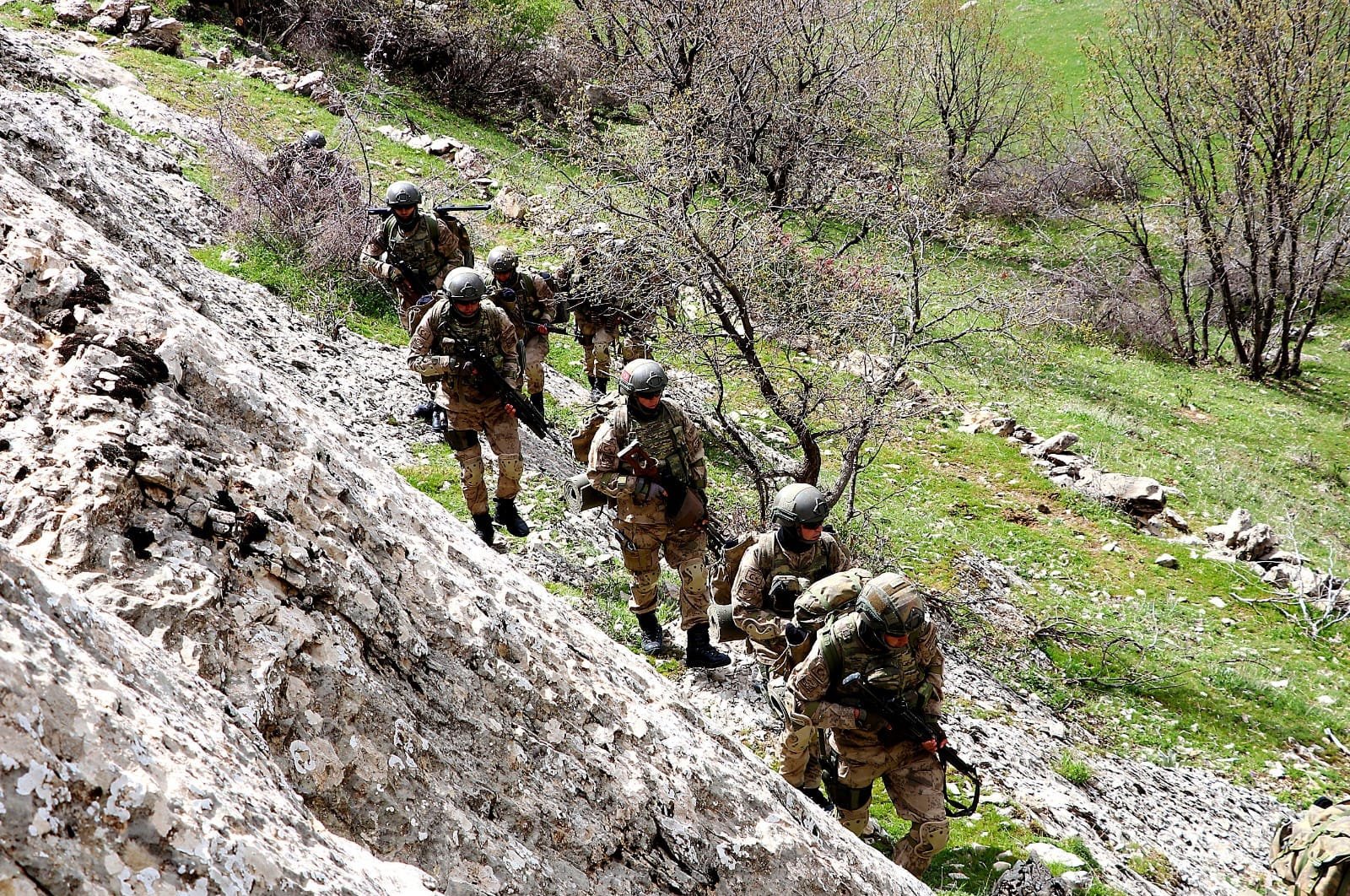 Turkish security forces regularly conduct counterterrorism operations in the eastern and southeastern provinces of Turkey where the PKK has attempted to establish a strong presence.
by DAILY SABAH WITH AGENCIES Jun 02, 2020 11:04 am
RECOMMENDED

According to the Turkish language daily, Hürriyet, the head of the PKK terrorist group, Murat Karayılan, recently broke his long silence when he appeared on a PKK-linked TV channel. He confirmed that Turkey's recent counterterrorism operations killed at least 18 high-ranked PKK terrorists. Karayılan reportedly said the terrorist group was left "helpless" in the face of Turkish military efforts.

He also referred to the killing of terrorist figures, including Diyar Garip Muhammed, Şengali, codenamed Ismail Özden, Mikail Özdemir, Emrullah Dursun and Ali Aktaş, and said the PKK has suffered a major blow with the loss of these people.

Karayılan reportedly went as far as to call on PKK terrorists to cover themselves with “supernatural powers” against Turkish military operations. He also accused his fellow terrorists of being snitches and sneaking inside information to the security forces.

Back in April, security sources told the Turkish language daily, Sabah, that Karayılan and other senior leaders of the PKK such as Cemil Bayık, Mustafa Karasu, Duran Kalkan and Sabri Ok, currently located at the group’s headquarters and camps on Mount Qandil and in the Sinjar regions of northern Iraq, fear for their lives.

The terrorist leaders constantly change their locations in Iraq, Syria and Iran and hide in the mountains to avoid being caught by the Turkish security forces. Accordingly, they avoid using all communication tools, including transmitters and refrain from making any contacts with other members of the terrorist group, intelligence reports said. Instead, they use fellow terrorists as couriers if they want to send a message to someone, the report noted.

There has also been a surge in the number of terrorists laying down arms and surrendering to Turkish security forces following these series of successful domestic and cross-border anti-terror operations.

The latest move of a group of terrorists surrendering to the security forces took place on Tuesday as four YPG/PKK terrorists laid down arms in the country's southeastern Şırnak province.

In a statement, the Interior Ministry said that four terrorists, identified only by their initials K.Y., N.A., S.Y. and N.A., turned themselves in as a result of the provincial gendarmerie command and security unit's ongoing efforts to convince terrorists to lay down arms.

It said a total of 81 terrorists have so far surrendered to the forces since the beginning of this year.

Security forces also work on cutting the revenue sources of the terrorist group by launching operations against drug trafficking. On Tuesday, the last six months' biggest blow to the PKK's drug trafficking took place as 2.5 million roots of cannabis sativa were confiscated by the security forces in the southeastern province of Diyarbakır. Apart from the cannabis sativa, 235 kilograms (518 pounds) of marijuana and 23 kilograms of skunk, a genetically modified marijuana, were also confiscated. While the marijuana was reserved for further examination, the cannabis sativas were destroyed after collecting samples.

Terrorist groups, particularly the PKK, have exacerbated the booming regional drug trade. It is accused of smuggling drugs to and from Europe as well as cultivating cannabis in southeastern Turkey as a way to fund its illegal activities.

Turkey is also fighting rising levels of drug abuse, especially among the youth and has stepped up anti-narcotics efforts in recent years.

The PKK's use of drug trafficking as a way to finance its terrorist activities has been reported many times before, not only by Turkey but also by several international actors.

A report by the European Monitoring Centre for Drugs and Drug Addiction (EMCDDA) and the European Union Agency for Law Enforcement Cooperation (Europol) decried growing gang violence and drug-related homicide in Europe and cited the PKK's role in this.

"The PKK ... has been reported to be involved in organized crime, with a few examples of its engagement in the drug trade in the EU," the 260-page 2019 EU Drug Markets Report said.

Back in January, Interior Minister Süleyman Soylu said in a "The Fight Against Narcotic Crimes Evaluation Meeting" in south Turkey's Antalya province that Operation Olive Branch, which was launched back in 2018 against the YPG/PKK in northwestern Syria, was a crucial step in preventing the terrorist group from turning the region into a hub for drug trafficking.

"Instability, income equality and ever-lasting wars are triggering drug trafficking and migration. If we had not carried out the Olive Branch Operation in Afrin, the region would have become the center of drug trafficking for the PKK. This situation points to the difficulties that we are facing in the region," said Soylu.

Soylu also stressed the PKK's pivotal role in European drug trafficking and organized crime. "The EU Drug Markets Report has pointed out that the PKK has been involved with organized crime and drug trafficking. This report has indicated that the volume of the EU's drug market is 30 million euros ($33.11 million) per year and that the PKK controls almost this whole drug market," the interior minister reminded.

A Turkish police report released on Sept. 26, 2019, said the PKK is active in all phases of drug trafficking, including production, delivery, distribution and sales. The terror group reportedly produces heroin in laboratories in its camps in northern Iraq and sells it to Europe. In its production process, the PKK terrorist organization forces civilians to produce cannabis roots in the eastern and southeastern provinces of Turkey and uses that money to fund terror activities.

In its more than 30-year terror campaign against Turkey, the PKK, listed as a terrorist organization by Turkey, the U.S. and EU, has been responsible for the deaths of 40,000 people, including women, children and infants. The YPG is the PKK's Syrian offshoot.