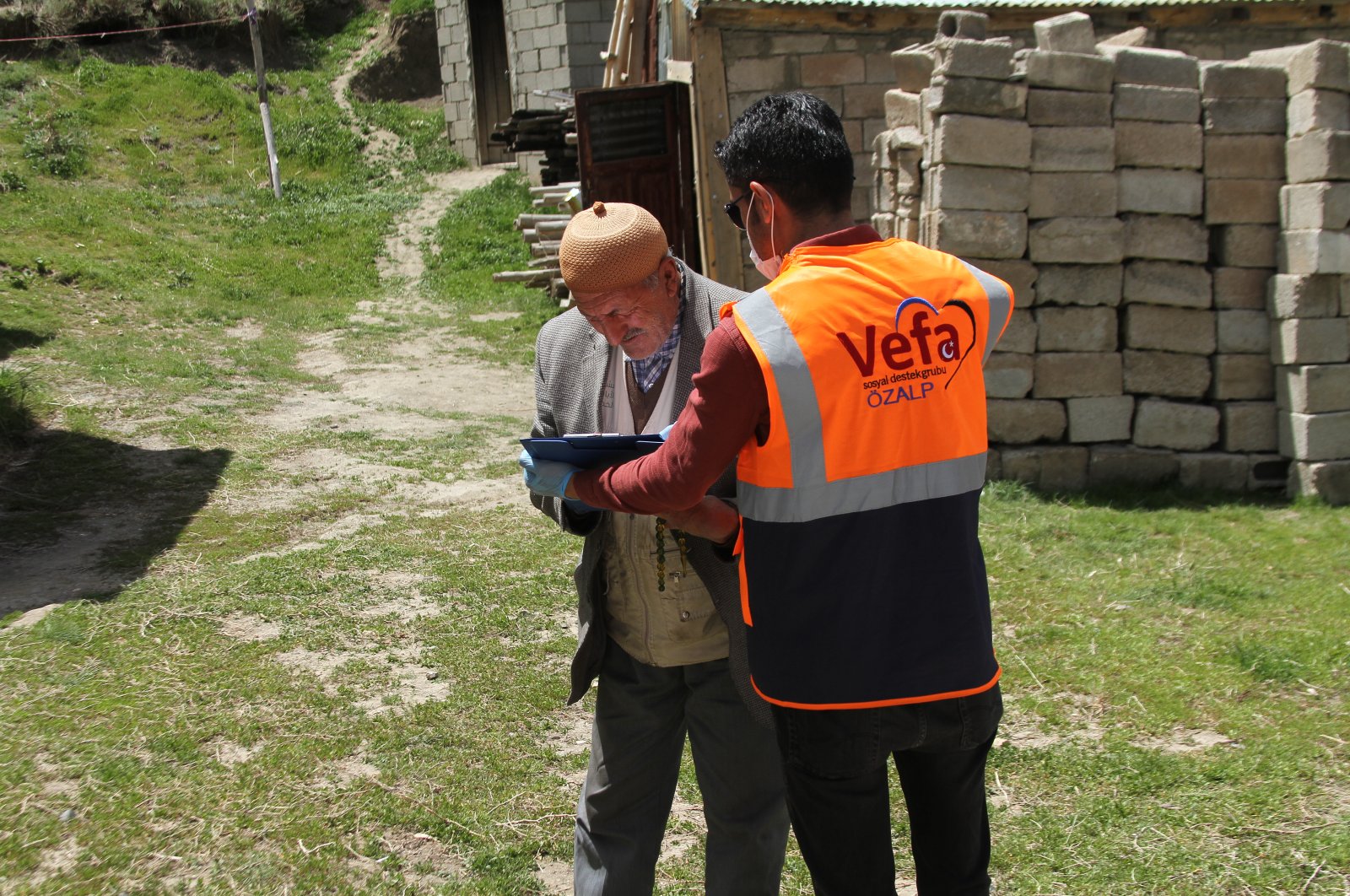 Eastern Turkey's Van province last week witnessed a PKK terrorist attack on a group of aid workers who were providing assistance to those suffering from pandemic-related issues. The attack, which killed two, proved that the PKK's brutality knows no limits, as attacks can occur at any time, anywhere, on any target, regardless of the circumstances. Still, despite the ongoing terror threat, the aid workers in the province continue to lend a helping hand to the needy while mourning their dead colleagues.

Workers of Vefa Social Support Group, which was formed to assist people during the pandemic, were attacked on May 14 while returning from a quarantined neighborhood in Van's Özalp district.

According to a statement made by the Van municipality following the attack, the group was in the neighborhood to distribute aid. After their work was done in the region, they were attacked by terrorists using long-barreled weapons.

Speaking to Anadolu Agency (AA), the head of Özalp district governorship's Social Assistance and Solidarity Foundation said that despite all the attempts to prevent aid workers from carrying on, they will continue their aid activities in the region.

"No matter what they (the PKK terrorists) do, we will continue to provide aid. We do not and will not hesitate to respond to the needs of our citizens, because our job is a humanitarian duty," said Yaver Akgül, whose teams were working together with the Vefa Social Support Group on the day of the attack.

Vefa Social Support Groups were initially formed to respond to the needs of people older than 65 whose mobility has been restricted as part of the coronavirus measures. Public workers, such as police, gendarmerie, security forces and personnel of Turkey's Disaster and Emergency Management Authority (AFAD), not only meet the needs of senior citizens but also provide protective equipment including masks, cologne, hand soap and disinfectants. The groups have been formed under the supervision of the district municipalities all over the country, and a call center has been established for people to obtain the group's services.

Underlining that the pandemic has caused the country to go through some difficult times, Akgül stated that it is time to take on responsibility, and they, as aid workers, are aware of that.

"Our people do not need to worry about anything since the aid teams they reach are efficient in responding to the need in time," he expressed.

The death toll in Turkey from the coronavirus rose to 4,140 in the past 24 hours, Koca said on Twitter, while the total number of coronavirus cases in the country rose to 149,435.

"An expected decrease has been recorded in our new case numbers, while other data has varied under the general situation. The role of the days we stay at home is significant. Let us all stay at home tomorrow and the day after," Koca said in his message.

A volunteer of the Vefa Social Support Group, Mustafa Sarkır, also expressed that they will continue to distribute the means provided by the state to the locals.

"Our teams are based on volunteering and they provide people with the means supplied by the state. Our state has been providing major aid and this aid is being delivered to the ones in need," he said.

"We have been through a terrible incident," Sarkır said, referring to the terrorist attack. "However, they (the PKK terrorists), will fail to set us back in this job. We will continue to carry our flag further. We are not afraid."

This was not the first time that the terrorist group has targeted civilians during the pandemic. Five civilians were killed after PKK terrorists attacked a group of forestry workers heading to collect wood in southeastern Diyarbakır province last month.

The attack took place on the road between the districts of Kulp and Hazro near the neighborhood of Güleç when PKK terrorists detonated a roadside bomb.

The attacks continue not only in Turkey but also in Syria. At least 11 civilians were wounded in a bombing carried out by the YPG/PKK terror group in the northern Syrian city of al-Bab, while in a previous attack on May 5 one civilian was killed in an explosion of a bomb in the same province. Prior to that, on April 28, at least 40 civilians, including 11 children, were killed and 47 others wounded in a YPG/PKK terrorist attack conducted using a bomb-laden fuel tanker in Syria’s northwestern town of Afrin.