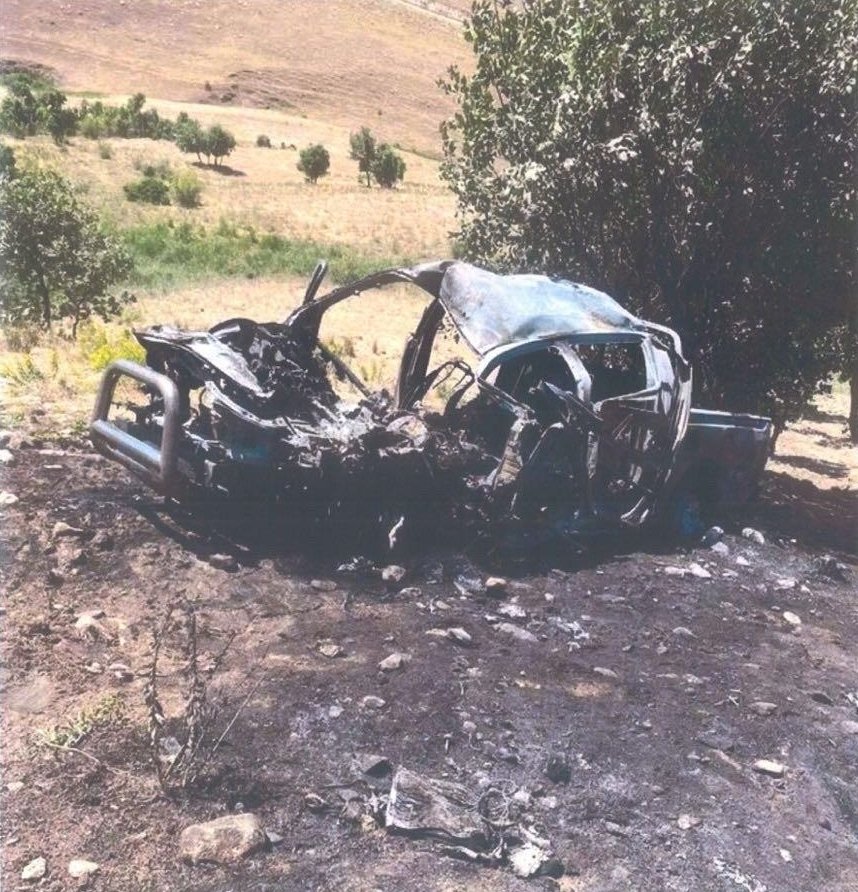 A destroyed vehicle is seen in this photo taken at an undisclosed location in northern Iraq. (AA Photo)
by DAILY SABAH Jun 22, 2021 12:02 pm

Turkish security forces killed a senior PKK terrorist who was responsible for carrying out a number of terrorist attacks in Turkey, reports said Tuesday.

A leading figure in the PKK, the terrorist was also sought by Interpol with a Red Notice.

The terrorist had been planning an attack on Turks in northern Iraq and had been collecting information about the targets, security sources said. He had also been mobilizing civilians in the area against Turkey.

Doğan initially served as a so-called PKK "executive" in the Hakurk area before being promoted to the senior figure responsible for the group’s self-defense in Iraq.

In the past, he carried out attacks in rural parts of Turkey’s Tunceli province and was responsible for laying mines, setting vehicles on fire and ambush activities in the area.

On June 22, 2011, he killed two police officers in the Nazimiye district in Tunceli. Later that year on Sept. 4, he attacked police officers playing a soccer game in the same province, killing an officer and his wife.

He also instructed terrorists to carry out an attack on Aug. 22, 2012, against village guards, killing one.

Recently, a terrorist named Hasan Adır, who was allegedly the senior figure responsible for the Sulaymaniyah area in northern Iraq, was also killed in a MIT operation in the area.

Earlier this month, the PKK terrorist group’s so-called Makhmour regional leader in northern Iraq code-named “Doctor Hüseyin” was eliminated in a joint operation by the MIT.

Many PKK terrorist hideouts and bases are located in northern Iraq from where they carry out attacks on Turkey.

PKK targets are being heavily targeted in the Metina, Avashin-Basyan, Zap and Qandil regions in northern Iraq. In addition to F-16 fighter jets, the operations are being supported by border artillery units, fire support elements in forward base areas and attack helicopters.

In mid-2014, the PKK managed to establish a foothold in Sinjar on the pretext that it was protecting the local Yazidi community from Daesh. Since then, the PKK has reportedly established ground in Sinjar as a new base for its logistical and command and control activities. Iraq’s Kurdish Regional Government (KRG) previously said that the PKK’s presence in Sinjar is unacceptable and called for the terrorists to leave the area.

The terrorist group has also tried to establish a strong presence in Turkey’s eastern and southeastern provinces.

In recent years, however, record numbers of PKK terrorists have been surrendering thanks to Turkey's determined domestic and cross-border counterterrorism operations.

Turkey’s wanted list is divided into five color-coded categories, with red being the most wanted, followed by blue, green, orange and gray.