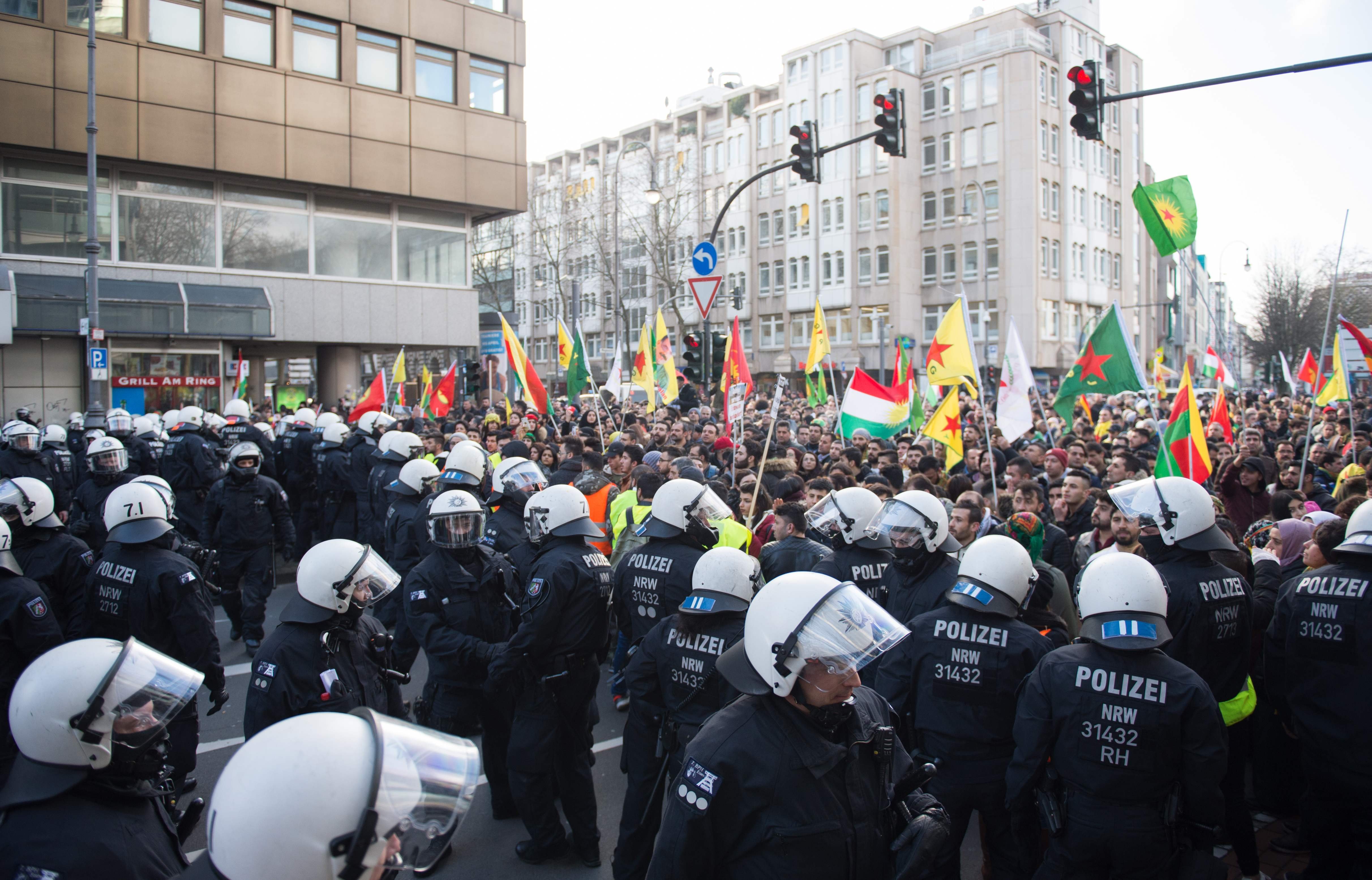 Police officers stop a mass demonstration by in Cologne with more than 20,000 PKK supporters protesting against the Turkish military operation in the Syrian enclave of Afrin, on January 27, 2018. (AFP Photo)
by DAILY SABAH Feb 27, 2020 11:19 am
RECOMMENDED

In an investigation against the PKK terror group in southern province Adana, a lawsuit has been filed against a detained defendant, who allegedly organized many illegal meetings in Germany, for a prison sentence of up to 15 years with the charge of “becoming a member of an armed terrorist group.”

The indictment about the suspected PKK member claiming that he provided financing to the terror group and organized many illegal meetings in Germany was accepted.

According to one of the charges in the indictment, the defendant organized many illegal meetings and aided terror organizations against Turkey’s Operation Peace Spring in German cities including Bochum, Essen, Dusseldorf and Dortmund.

Turkey launched Operation Peace Spring on Oct. 9 to eliminate terrorists from northern Syria east of the Euphrates River in order to secure Turkey's borders, aid in the safe return of Syrian refugees and ensure Syria's territorial integrity. Operation Peace Spring was the third in a series of cross-border anti-terror operations in northern Syria targeting terrorists affiliated with Daesh and the PKK’s Syrian offshoot, the YPG.

The operation, conducted in line with the country's right to self-defense borne out of international law and U.N. Security Council resolutions, aims to establish a terror-free safe zone for the return of Syrian refugees in the area east of the Euphrates River controlled by the YPG terrorists.

Following the beginning of the operation, numerous illegal meetings, organizations and violent attacks by PKK supporters targeting the Turkish community across many countries in Europe were reported.

The attacks not only targeted Turkish civilians but also foreign missions, businesses, Turkish associations and mosques, with the sympathizers of the terror group even setting fire to these places in some instances. Apart from attacking the Turkish community, PKK supporters also held rallies in support of the terrorist group in several European capitals, including Berlin, London, Amsterdam, Cologne and other cities.

As the attacks mounted, Turkey called for an increase in security measures against the PKK violence in European countries amid the ongoing anti-terror operation in Syria.

This was not the first time Turkish civilians have been targeted by the PKK in Europe after Turkey had launched an operation against terrorist groups. Their supporters have previously targeted innocent civilians across Europe, thanks to the leniency of European governments toward the violence.