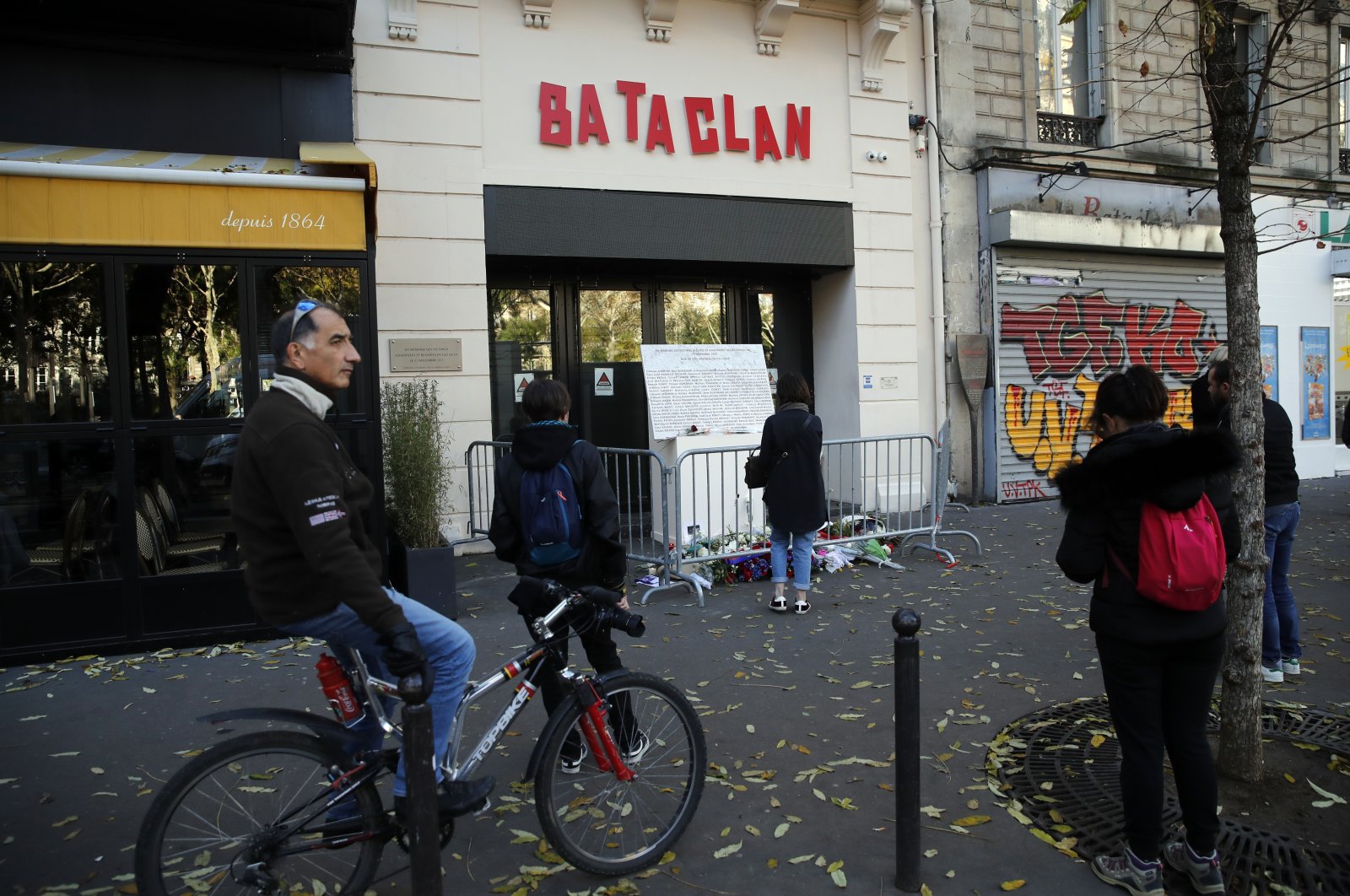 People stand in front of the entrance of the Bataclan concert hall after a ceremony marking the third anniversary of the Paris attacks of November 2015 in which 130 people were killed, in Paris, France, Nov. 13, 2018. (AP Photo)
by agencies Aug 28, 2020 10:10 am
Edited By Nurbanu Tanrıkulu Kızıl
RECOMMENDED

The terrorist threat against Europe has mutated in the last half-decade as terrorist groups have seen their Middle East sanctuaries eroded, but analysts say the West must remain braced for more attacks.

Both al-Qaida and the Daesh terrorist group – together responsible for the highest-profile and most horrific terror attacks of the past two decades – have lost potency as global organizations.

Despite splintering into branches and franchises, their murderous ideology is still able to inspire individuals to carry out random attacks in their name.

Next week in Paris, 14 people face trial over the massacres in January 2015 at satirical magazine Charlie Hebdo, a policewoman and hostages in a Jewish supermarket – violence claimed for both Daesh and al-Qaida.

The murderous shooting spree heralded an unprecedented wave of attacks in France.

The deadliest was the coordinated attacks in Paris on Nov. 13 that year at the Bataclan music venue and other venues, when gunmen killed 130 in a plan stemming from the Daesh group's core leadership in Syria.

Experts believe the same style of assault would be unlikely to recur now, not least because Daesh has seen a dramatic loss of its territory and membership in Iraq and Syria.

A French security source told Agence France-Presse (AFP) that isolated individuals who were not spotted by the intelligence services and their limited or even nonexistent contacts with identified terrorist networks have become more common.

Since 2015, France has seen 17 crimes classified as acts of terrorism.

Three took place in 2020, none of which were claimed by the terror groups but were instead perpetrated by isolated individuals suffering from psychological problems.

But anti-terror prosecutors still see signs of operational coordination, including "networks of false documents and funding," the source said.

Seth Jones, director of the Transnational Threats Project at the Center for Strategic and International Studies (CSIS) in Washington, said that in recent years, the U.S. and other military operations had "decimated" the Daesh external operations network, killing or capturing many of its key operational leaders.

Its military rout and the loss of territory Daesh had declared as a caliphate in Iraq and Syria have also diminished its status, and the motivation for individuals to carry out attacks in its name.

It remains possible that al-Qaida could carry out a major attack in Europe, Jones said, either directly or through individuals inspired by its ideology, though this was "not a high probability."

The COVID-19 pandemic may have taken some focus off terrorism for security forces worldwide.

But it has also complicated the task of the terrorists, who have been active on a local level but very cautious about ranging further afield.

"In general, the short-term terrorist threat has risen in conflict zones and fallen in non-conflict zones," a U.N. report said in mid-July.

Plots continue to emerge, however.

German authorities said in April they had foiled a plot to target American military installations and arrested five Tajiks suspected of acting in the name of Daesh.

Another source of risk comes from individuals released from jail in Europe or freed or escaped from PKK/YPG-controlled prisons in northern Syria where they have been held since Daesh was defeated.

For instance, in March alone, some 200 prisoners, most of whom are Daesh terrorists, were released from prisons by the PKK/YPG in Syria's Hasakah and Raqqa provinces after some Arab tribes vouched for them.

Forces led by PKK/YPG terrorists run more than two dozen detention facilities, scattered around northeastern Syria, holding about 10,000 Daesh fighters. Among the detainees are some 2,000 foreigners, including about 800 Europeans.

Jean-Charles Brisard, head of the France-based Center for the Analysis of Terrorism (CAT), told AFP he did not rule out a new targeted action by Daesh, pointing to recent attacks foiled in Europe.

"The next cycle will be that of those who are leaving jail," he said.

The CAT has established that 60% of prisoners in France convicted for their actions in past conflicts in Bosnia-Herzegovina, Iraq or Afghanistan reoffended violently after their release.

A French security source, who asked not to be named, said West Africa is a particular concern after France's forces deployed in the region in June killed the head of al-Qaida in the Islamic Maghreb (AQIM), Abdelmalek Droukdel.

Eight people, including six young French aid workers, were killed in a suspected terrorist raid Aug. 9 in Niger, but no group has claimed responsibility for the attack.

"I find it more likely that AQIM will conduct a revenge attack against French forces or other French targets in Africa – including North and West Africa – than in France itself," said Jones. "It is easier for the group to operate in Africa."