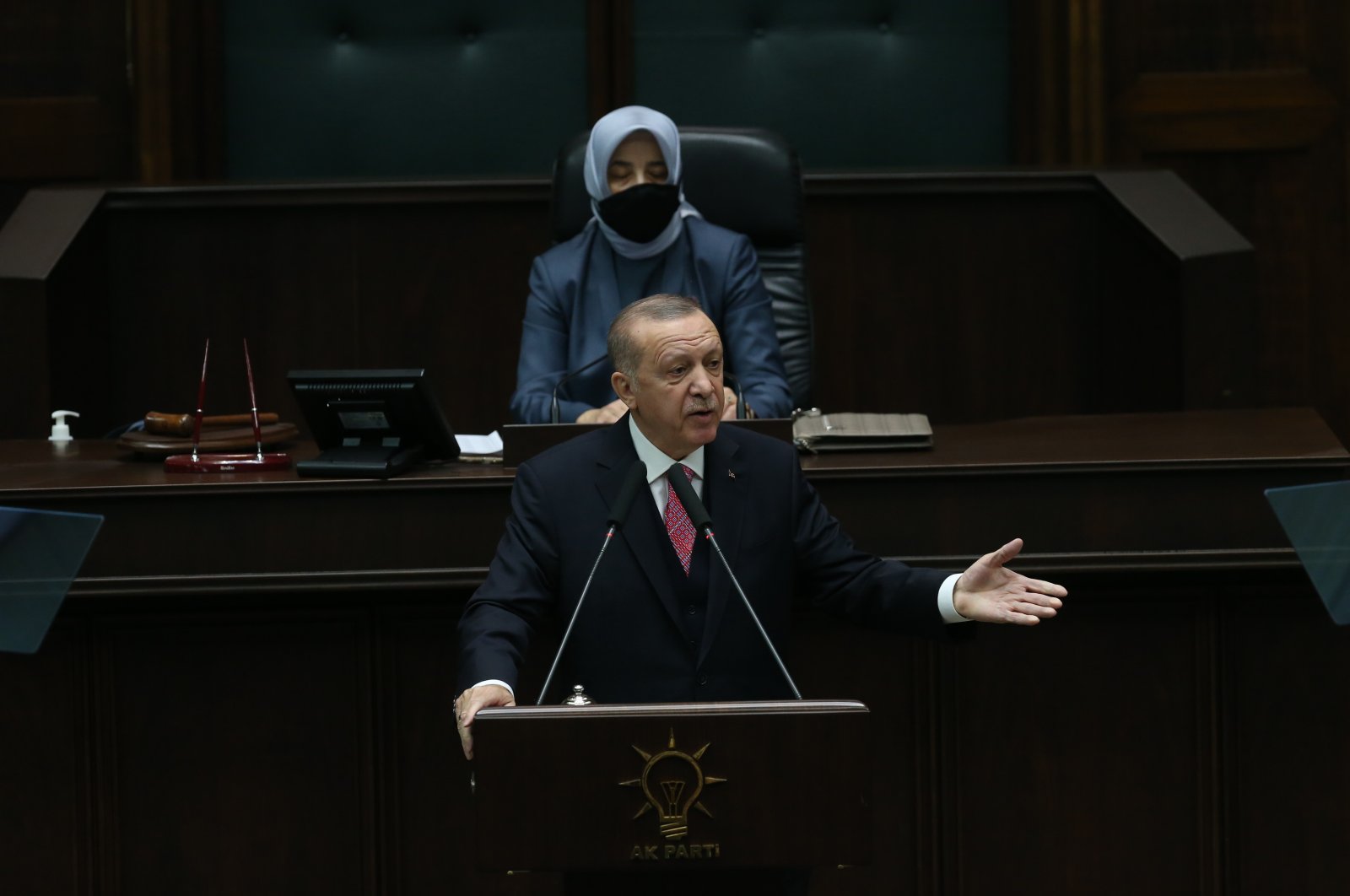 Reiterating that Turkey does not face a 'Kurdish issue' but rather the issue of terrorism, Erdoğan underlined that the rights and living conditions of the Kurdish community in Turkey have significantly risen in recent years, while further reforms on rights, freedoms and democracy are on the horizon

Turkey has no "Kurdish issue," President Recep Tayyip Erdoğan said Wednesday, underlining that the government has never discriminated against anyone, on the condition that they have no ties with any terrorist group.

“I’ve said this dozens of times before and will say it again: There is no Kurdish issue in Turkey. We are here to defeat terrorism in all forms,” Erdoğan said in his speech to the ruling Justice and Development Party’s (AK Party) parliamentary group meeting.

“We cannot ignore the fact that it is the separatist terrorist organization’s (PKK) armed and political representatives that are the biggest enemy of our Kurdish brothers,” Erdoğan underlined.

Erdoğan's comments followed recent controversial remarks made by former parliamentary speaker and member of the AK Party Bülent Arınç, when he said that Osman Kavala, a Turkish tycoon implicated in Gülenist Terror Group (FETÖ) investigations, and Selahattin Demirtaş, the former head of the Peoples' Democracy Party (HDP), both of whom are in prison on terrorism charges, could be released. Arınç's remarks have been criticized by Erdoğan and other AK Party politicians.

Demirtaş defends terrorism and “has the blood of thousands of Kurds on his hands,” Erdoğan said, once again criticizing Arınç for saying in a recent televised interview that Demirtaş's book, "Devran," should be read to understand the Kurdish issue in Turkey. Demirtaş was detained in November 2016 along with other top figures of the HDP on terror charges after they refused to attend trials related to earlier cases they were accused in. He and his party are often criticized for their open support of the PKK terrorist group, which has been responsible for the killings of thousands since the early 1980s.

The president said that while the PKK kills hundreds and families protest in front of the HDP provincial building in Diyarbakır province in an effort to raise their voice against the terrorist group and be reunited with their abducted children, supporters of terrorism cannot be rewarded.

Erdoğan was referring to more than 150 families who have been holding a demonstration in Diyarbakır for over a year, as they state the HDP has been supporting PKK terrorists in recruiting and kidnapping youth.

“Otherwise, how can we look at the faces of the mothers whose children have been forcefully abducted in the mountains, and who were dragged to death, or at the faces of those who could not protect their families from the terrorist organization or live in security?” Erdoğan asked.

Erdoğan has frequently voiced that Turkey targets terrorists. He reiterates that it is the PKK and its affiliates causing the greatest harm to Turkish society and especially to Kurdish citizens through forcing them to pay tributes to the terrorist organization, while Kurds have often been oppressed and killed by the organization and their children brainwashed to join in their terrorist acts.

“Kurds have for a long time suffered most in this country; however, there was a problem in freedoms, rights, law and justice faced by the whole people,” Erdoğan said.

In the past decade, Turkey has made significant progress in terms of rights given to Kurds, despite many decades of negligence, including the establishment of a Kurdish TV channel, the introduction of Kurdish lessons in universities and other development projects.

The community had fallen victim to a brutal campaign of terror by the PKK and the state's harsh measures to contain it.

The PKK positioned militants in heavily populated urban areas in the southeast while using suicide attacks against both civilian and public targets. Several HDP deputies and municipalities held by the HDP are accused of collaborating with PKK militants and providing logistical support and equipment during that change in the terrorist group's violent campaign.

According to Interior Ministry investigations, municipalities run by the HDP helped terrorists in various towns and cities dig trenches and erect barricades. Mainly deployed in the southeastern Diyarbakır, Şırnak and Mardin provinces, this strategy led to the destruction of entire neighborhoods in clashes, with the most damage inflicted on Şırnak's city center and in the districts of Sur, Cizre and Nusaybin.

However, the strategy collapsed following successful anti-terrorist operations and the lack of cooperation from the people in the region. The cities suffered significant damage during the operations. Since then, the government has invested huge amounts of money to restore infrastructure and public services in the region.

Drawing attention to the big changes these provinces have undergone recently, Erdoğan said, “With our trustees, we have transformed the region from top to bottom and continue to do so in the fields of energy, health, education, justice and security.”

He said that people who visited the region 15 or 20 years ago would have difficulty recognizing it now. “There is a brand new Diyarbakır, Siirt, Hakkari, Şırnak because we are here to serve the people. We came for the peace of the people and are here to remove terrorism and terrorists,” Erdoğan added.

A recently published report by the Interior Ministry said that services and infrastructure projects have thrived in municipalities where PKK-linked administrations previously attempted to direct financing and means to aiding the terrorist organization while ignoring the local people's needs.

Saying that public resources have been secured thanks to the appointment of trustees, the report stated that citizens’ peace and prosperity have increased as more resources were used for municipality services.

It added that while TL 1.7 billion ($219.49 million) of investment was made in these municipalities, a debt of TL 1.5 billion was paid.

As part of using the municipalities’ resources for citizens’ services, 172 kilometers (106.8 miles) of asphalt, 2,245 kilometers of stabilized road, 710 kilometers of water supply network, 61 potable water wells, 13 drinking water and wastewater treatment facilities, 430 kilometers of sewage system, 229 gardens and playgrounds and 10 youth centers and women's cultural centers were constructed since trustees took over the municipalities. About 431,475 trees were also planted during this time.

Rights, freedoms to be enhanced

On the other hand, Turkey also recently announced that it is introducing new reforms in the areas of democracy, economy and the judiciary. The new period of reforms will especially focus on the fields of human rights and the judicial system, government officials have said. Erdoğan said the country is expected to establish a balance in which freedoms and security complement one another.

“Turkey has never abandoned democracy and law in its fight against terrorism coming from both within its borders and outside, in challenging coups and or in breaking international sieges,” the president underlined, saying that efforts by some circles in the European Union and the U.S. to show Turkey other than in this manner are nothing more than acts in pursuit of their own agenda.

Erdoğan indicated that these kinds of statements did not only come from the outside but also from people “with whom we have for years fought for this struggle.”