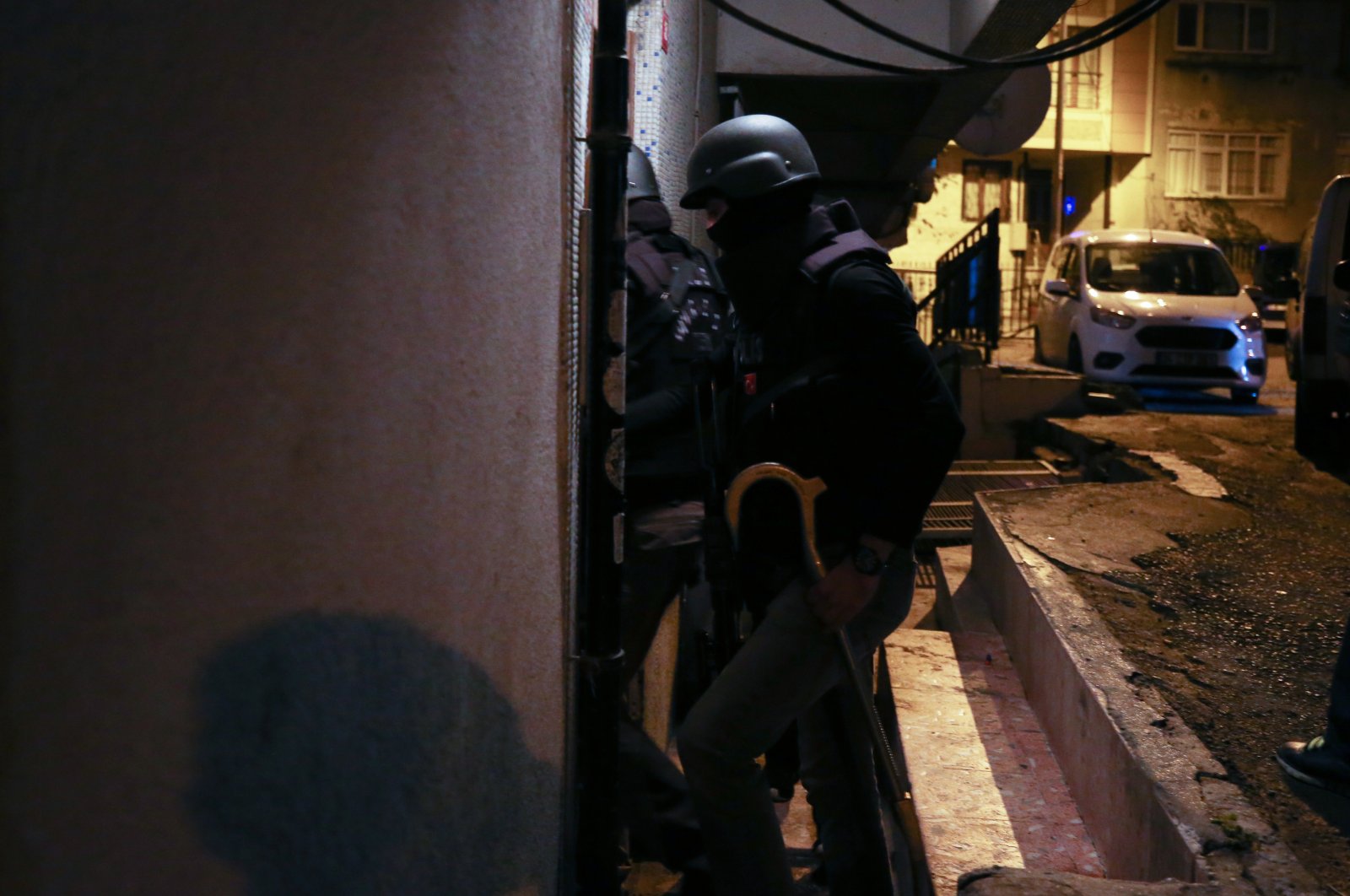 The Department of the Fight Against Terrorism launched an operation against the Daesh terrorist group in Turkey's Istanbul, Sept. 30, 2020. (AA Photo)
by DAILY SABAH Oct 05, 2020 11:41 am

Launching multiple counterterrorism operations, Turkey continues to fight all kinds of terrorist organizations both within the country and abroad where terror groups have tried to establish a foothold

As Turkey’s fight against terrorism continues both through internal and cross-border operations, security forces have killed two high-ranking terrorists while arresting a far-left terror suspect as well as 25 Daesh-linked foreign nationals.

Interior Minister Süleyman Soylu on Monday announced on Twitter that two high-ranking terrorists, one of which was sought under the red category and the other in the orange category, were killed.

According to the Interior Ministry’s statement, the terrorists were killed by the provincial gendarmerie command in Tunceli province’s Ovacık rural area on Oct. 2 as part of the Lightning-4 anti-terrorism operation.

The terrorist in the red category was determined to be Ali Kemal Yılmaz, code-named Özgür, the so-called Tunceli head of the Liberation Army of the Workers and Peasants of Turkey (TIKKO) terrorist group. Yılmaz participated in the terrorist group in 2007 and was an expert on mines and improvised explosive devices (IEDs).

The other terrorist in the orange category was Gökçe Kurban, code-named Asmin, and was responsible for the women in the TIKKO.

TIKKO is the armed wing of the outlawed Communist Party of Turkey/Marxist Leninist (TKP/ML). The TKP/ML, founded in 1972, sought to topple the current Turkish government and supplant it with a communist one in a "democratic people's revolution" and is responsible for many fatal attacks within Turkey.

The wanted list is divided into five color-coded categories, with red indicating the most wanted, followed by blue, green, orange and gray.

Two other Turkish security personnel were also wounded in the clash with terrorists during a reconnaissance and surveillance activity, part of Operation Lightning-3. The wounded soldiers were transported to a hospital in Ağrı, but despite emergency treatments, one of them succumbed to his wounds, the ministry said.

Another far-left terror suspect was arrested in northwestern Turkey while attempting to illegally cross into Greece, a security source said Monday.

The arrest took place when the suspect affiliated with the Revolutionary People's Liberation Party/Front (DHKP-C) terrorist group was spotted in a restricted military zone in the Meriç district of the Edirne province.

The suspect, identified by the initials H.E., was taken to the Gendarmerie General Command, said the source, who spoke on the condition of anonymity due to restrictions on speaking to the media.

The DHKP-C is responsible for a number of terrorist attacks in Turkey, including a 2013 attack on the U.S. Embassy in Ankara that left a Turkish security guard dead and a journalist injured.

The far-left group is listed as a terrorist organization by Turkey, the United States and the European Union.

Turkish police detained 25 Daesh-linked foreign nationals, including a Finnish suspect in a joint counterterrorism operation with the National Intelligence Organization (MIT) in the capital Ankara Monday.

The suspects reportedly had contact with terrorists in conflict zones, reports said.

Twenty-four of them were identified as Iraqi nationals.

Police are searching for four other suspects as part of the operation.

A case was opened in the Adana province, investigating whether the Daesh suspect was a member of an armed terrorist organization. The indictment prepared by a public prosecutor will charge the suspect, E.E, with a 15-year prison sentence. The indictment claims that Daesh has been teaching the organization's goals and ideologies to group members and that a number of these digital teaching materials were seized from the home of E.E, including photos and documents of the organization.

Within the scope of anti-terror efforts, Turkish security forces also dealt a heavy blow to the PKK terrorist group and its Syrian affiliate the YPG. Around 110 terrorist members were killed as part of an operation in September.

Another three YPG/PKK terrorists were killed in the Operation Olive Branch area on Monday, the Defense Ministry stated.

Since 2016, Turkey has launched a trio of successful anti-terrorism operations – Euphrates Shield (2016), Olive Branch (2018) and Peace Spring (2019) – across its border in northern Syria to prevent the formation of a terror corridor and enable the peaceful settlement of residents.

The PKK, which is listed as a terrorist organization by Turkey, the U.S. and the EU, has waged a campaign of terrorism against Turkey for more than four decades and has been responsible for the deaths of nearly 40,000 people, including women and children.

Dalya Mahmut Muslum, the niece of the former head of the PYD/YPG – a Syrian affiliate of the PKK terrorist organization – identified 127 terrorists through photos. A file was opened for Muslum demanding prison time of 7 1/2 to 15 years for being a member of an armed terrorist organization. The indictment stated that Muslum identified 127 terrorist members through archive photos and revealed the position of terrorists in Syria in 26 places on the map.

Muslum, who surrendered in July following efforts made by security forces, appeared in court before being released on bail the same month.

A significant number of suspected terrorists have started fleeing the PKK and surrendering while many terrorists lack the courage to leave the group because they would face severe punishment if caught.