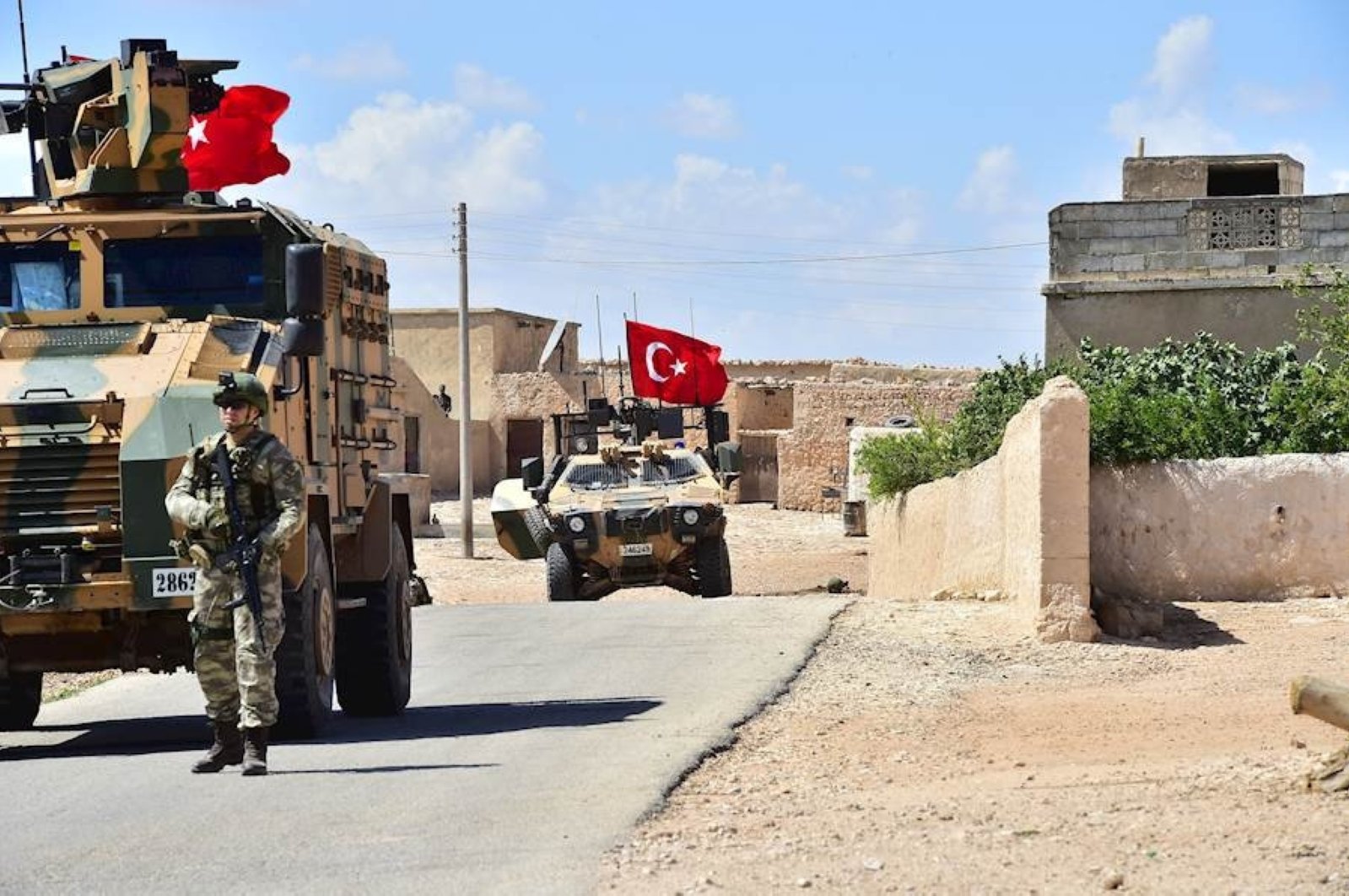 Buildings are rising, children have returned to school, people’s faces glimmer with hope and shops have popped up in every nook of the streets in the northern Syrian town of Jarablus in the four years since the Turkish Armed Forces (TSK), together with the Syrian National Army (SNA), launched Operation Euphrates Shield against Daesh terrorists in northern Syria in August 2016. A place wrecked by war is now gradually returning to normal as daily life has been restored to the war-weary people that have not only lost family members and homes but also invaluable years of their lives.

“There was nothing left here,” a Syrian teacher in Jarablus recalled, thinking about the years before the border town was liberated from terrorists by Turkish security forces. “We feared for our lives during the times Daesh was in the town; now Jarablus has tranquilized.”

With the aim of maintaining border security, confronting Daesh and hindering the PKK terrorist group from establishing a presence on Turkey’s doorstep, Ankara exercised its right to self-defense codified under United Nations Charter Article 51. The operation brought peace and stability to the region that has been bandaging its wounds and trying to rise again.

Today, councils filled with locals have been established and residents in the areas under the protection of Operation Euphrates Shield can easily access education, health, social, vocational, infrastructure and trade services, enabling them to go back to the years of pre-2011 Syria. Jarablus, with just over 10,000 residents before the war, saw its population reach around 150,000 thanks to Turkey's successful intervention as displaced Syrians returned to their homes.

“With the help of the Turkish republic, schools have ameliorated; tables, books and equipment were provided, while teachers have begun to receive their salaries,” said elementary teacher Ramazan Moustafa, who also has children going to the Vali Ahmet Turgay Imamgiller school, which has been restored by the Turkish Education Ministry and named after the Gaziantep deputy governor who last year lost his life while working in Jarablus.

Currently, 117 schools have opened their doors to 37,803 students in Jarablus and the nearby district of Gandura. Education ranges from kindergarten to a Gaziantep University vocational school that opened last year and has had an exceptional influence on young people, Moustafa explains. “That Gaziantep University opened a vocational training school in Jarablus gave students a cause for further striving, it encouraged them, it gave meaning to their education and made them cling onto it,” he said.

Many Syrians like Moustafa are grateful for Turkey’s efforts and for being able to escape from oppression under Daesh. Local people are busy using the institutions built and organized under the guidance of Ankara, while children with big smiles on their small faces wave to Turkish soldiers passing by.

The teacher added that expectations from Turkey are still high and that the greatest problem remaining is the threat of terrorism, which occasionally takes shape in the form of bomb-laden vehicle or motorcycle attacks.

‘Main threat PKK, rather than Daesh’

The YPG/PKK terror group, which continues to attack from Syria's Tal Rifaat and Manbij regions, still targets Jarabulus, Azaz and Afrin. “The main threat is the PKK, rather than Daesh currently,” the newly-appointed deputy governor of Gaziantep pointed out. He added that security measures have scaled up, leading to fewer terrorist attacks. Accordingly, though 108 incidents have occurred this year, only three people have lost their lives, most recently when a bomb-laden motorcycle detonated in the middle of the city. “Their aim is to target the inner center,” Deputy Governor Talha Battal stressed.

“Still, Jarablus is one of the safest places in Syria,” Battal said. “All necessities that are found in a normal state can be found here. Yet this is not exclusive to this town, after Operation Euphrates Shield, the whole region started to recover as the population swelled.”

The population of Jarablus mainly consists of Arabs, Turkmen and Kurds. Of the 48 villages linked to Jarablus, around 35 of them are Turkmen. A local council of 16 people, soon to be raised to 24, for Jarablus as well as the district of Gandura was established to serve the community. The members, consisting of various backgrounds, are chosen every two years.

Turkish officials stressed that guidance, consultancy and support are given whenever possible to the locals. Security forces, health staff and teachers have been trained, the population has been registered and provided with IDs and license plates, roads have been built and 85 kilometers (52 miles) of fiber internet has been installed. “We want them to able to stand on their own two feet once we are gone,” a Turkish official said, who also cited the famous quote, “Give a man a fish and you feed him for a day; teach a man to fish and you feed him for a lifetime.”

A directorate for social services is overseeing a wide range of activities including monthly aid to the families of those killed fighting terrorism, vocational training programs, a women's empowerment department and psychosocial help for the disadvantaged and orphans. “Families separated through war and terror are brought together. So far, around 170 have been rejoined with their loved ones,” an official stated.

An orphanage, which was officially opened with a ceremony on Wednesday, came into service with all kinds of facilities and playgrounds. In preparation for another potential refugee flow, tents have also been erected.

Life has started to be regulated through local rules and laws that existed in the prewar state of the town. Around 1,700 workplaces have been determined as well as their rules of operation. In addition, a land registry service and a financial services center that monitors the incomes and spending of the local council was established.

In terms of religious services, before Turkey's operation, there were 95 mosques and that number has increased to 137, as the construction of another 15 continues. Sports and the youth have also not been forgotten as football fields and basketball courts have been built while the social services center provided a cinema – the only one in the region. Şefik Yalçın, who is from the Ministry of Family, Labor and Social Services and is responsible for the coordination between nongovernmental organizations (NGO) and local councils, stated, “the cinema was created to enhance the imagination of children. Films in Arabic appropriate to their own culture will be screened.”

He added that a large number of NGOs from various Arabic countries are operating in Jarablus, but Turkey has the most. Projects in the town are financed by a variety of institutions mainly consisting of the Turkish government, NGOs and the local council.

With the steep fall in the value of the Syrian pound against the U.S. dollar, civilians in the Operation Euphrates Shield region have turned to the lira. “The Turkish lira is widely used, currently both currencies are available, but people prefer the lira since it is seen as more stable,” Battal said.

Soaring prices have made life hard for Syrians, whose country has been ravaged by a war that has killed hundreds of thousands and displaced millions since it erupted in 2011. In addition, the conflict has devastated the nation's economy, plunging 80% of its people into poverty, according to the United Nations. Despite relative quiet on Syria's remaining battlefields, early 2020 has only seen the situation worsen with the coronavirus pandemic.

Though no cases of the coronavirus have been traced yet in Jarablus, the town is confidently building a COVID-19 hospital that will soon be able to operate at full capacity. Besides taking preventative measures, such as providing people with information, distributing brochures and putting an emphasis on wearing masks and keeping a social distance, Jarablus has set up a specially designed center for quarantine. The COVID-19 hospital has a 40-bed capacity and has conducted nearly 300 tests so far, while a laboratory is also on the way that will enable examinations to be checked in Jarablus soon. Currently, tests are shipped to Gaziantep for review, which risks the authenticity of the results, the chief physician Yasin Şahin explained.

“Cases can emerge any time, but when the virus will be here, we will be ready,” said Şahin.

Right next to the Jarablus hospital, the COVID-19 facility was transformed from a Daesh prison into a health care center. It is capable of high-level operations and has eight ambulances in service, which will help to prevent the large-scale spread of the virus if it arrives in the town.

“During the time of the Bashar Assad regime, there was not a single hospital in Jarablus,” Şahin added. Throughout the hospital, there are signs indicating that all services in this health institution opened by the Turkish health ministry, are free.

For years, Assad has ignored the needs and safety of the Syrian people, only eyeing further territorial gains and crushing his opposition. With this aim, the regime has for years bombed vital facilities such as schools, hospitals and residential areas, causing the displacement of half the country’s population.

In addition to Euphrates Shield, Turkey also launched three other counterterrorism operations – Olive Branch in 2018, Peace Spring in 2019 and Spring Shield this year – across its border in northern Syria to prevent the formation of a terror corridor and enable peaceful settlement by locals. Operation Olive Branch cleared the northwestern Afrin district of YPG/PKK members while Operation Peace Spring liberated the northern towns of Ras al-Ayn and Tel Abyad from the terrorist group and captured areas along the strategic M4 highway. The most recent Operation Peace Spring targeted the Assad regime and its allied militia over their advance in Idlib in violation of a truce agreed upon between Ankara and Moscow.