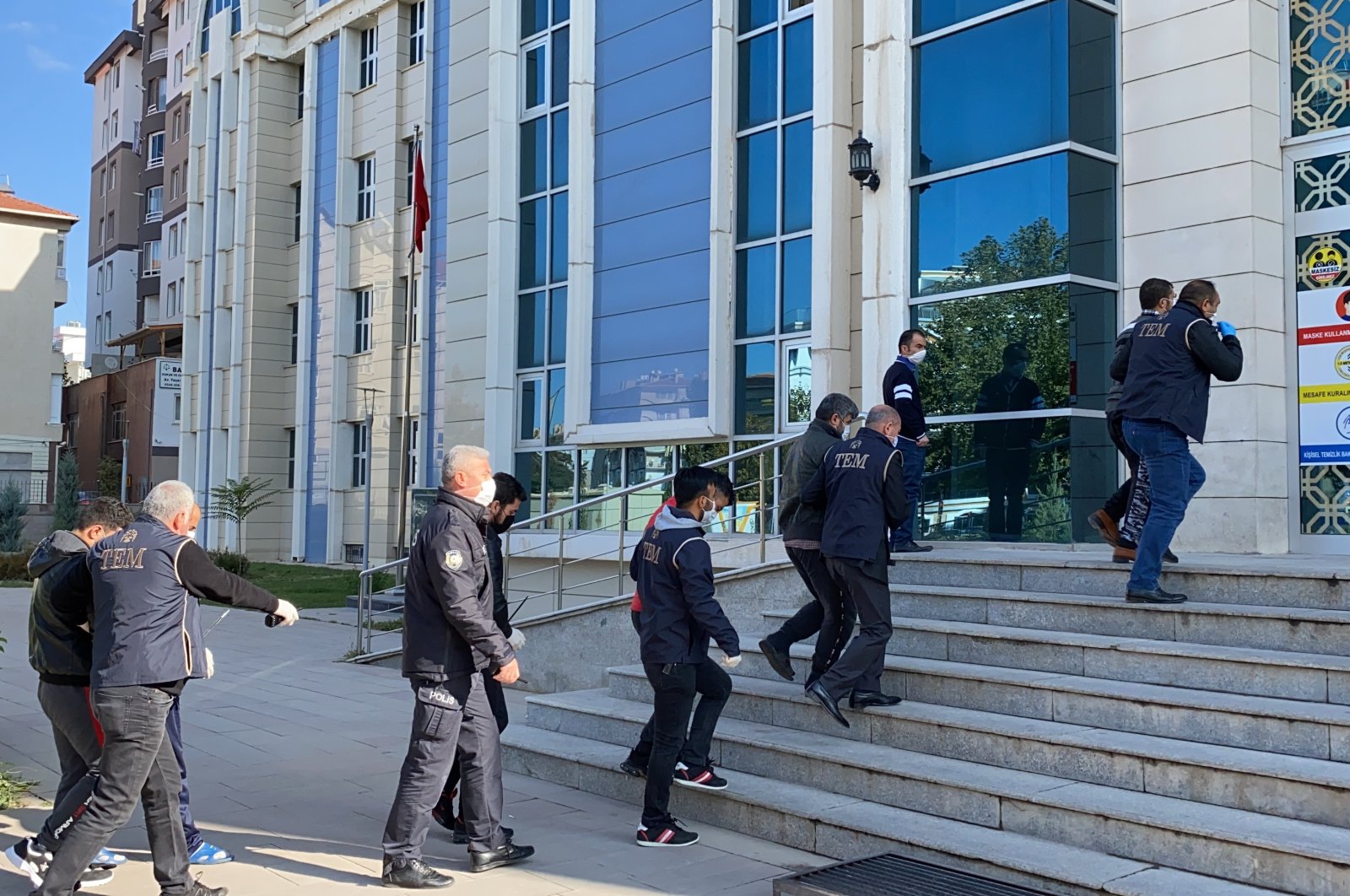 Daesh suspects nabbed in anti-terror operations are brought to the court by security forces in the Central Anatolian province of Kırşehir, Turkey, Nov. 2, 2020. (AA Photo)
by DAILY SABAH WITH AA Nov 02, 2020 11:49 am
RECOMMENDED

While 26 suspects were imprisoned, some of them were deported. Also, legal processes about many suspects are still ongoing. In addition, many documents, weapons and ammunition belonging to the extremist terror group have been seized in operations.

Turkey’s largest city Istanbul saw the most intense operations against the group while 59 suspects were arrested in the metropolitan city.

In the capital Ankara, seven suspects who were accused of planning attacks on Turkish national holidays were detained last week.

They were reportedly planning attacks on the Oct. 29 Republic Day and during the Nov. 10 ceremonies commemorating the death of the founder of the modern Turkish state, Mustafa Kemal Atatürk.

Special forces police raided the homes of the suspects, two of whom were believed to have played an active role in armed combat in Syria. Another individual was accused of being an "executioner" for the terrorist group.

The Ankara Chief Public Prosecutor's office said seven arrest warrants for the suspected Daesh members were issued, and they were all detained in two separate investigations. It did not, however, provide any further detail or reveal the suspects' nationalities.

In another operation in the capital, 25 suspects, including 24 Iraqis and one Finnish, were arrested.

Separately, local police in the northwestern Kocaeli province arrested six Daesh suspects, including four foreign nationals, in raids across the city, the provincial police headquarters said in a statement.

Police also seized a number of documents and digital materials as well as drugs during the operations.

While a senior figure who is a so-called executive within the group was caught during an operation in southeastern Siirt province, where five more members were also detained, a so-called commander of the group’s activities in northeastern Syria’s Deir-el Zour region was also caught in the southern Adana province.

In northwestern Bursa province, the group’s former intelligence executive in Syria between 2014 and 2017 was arrested.

Soumaya Raissi, a Daesh terrorist wanted by France with a red notice, was also arrested in southern Turkey’s Adana province.

The 30-year-old Tunisian national, Raissi, was wanted by French authorities and identified as "dangerous" and "activist," the sources said on condition of anonymity due to restrictions on speaking to the media.

Sources also said that the Daesh terrorist was found to possess a fake Syrian ID card.

The country has since been attacked by Daesh terrorists multiple times, with at least 10 suicide bombings, seven bomb attacks and four armed attacks that killed 315 people and injured hundreds more. The last attack was in January 2017 when a gunman killed 39 people at an elite Istanbul nightclub during New Year celebrations.

Ankara has long criticized European countries' lack of cooperation on security issues and their reluctance to take serious measures against foreign fighters.

Since the beginning of the Syrian civil war in 2011, nearly 5,000 foreign fighters traveled from the European Union to conflict areas in Syria and Iraq, according to Europol estimates.