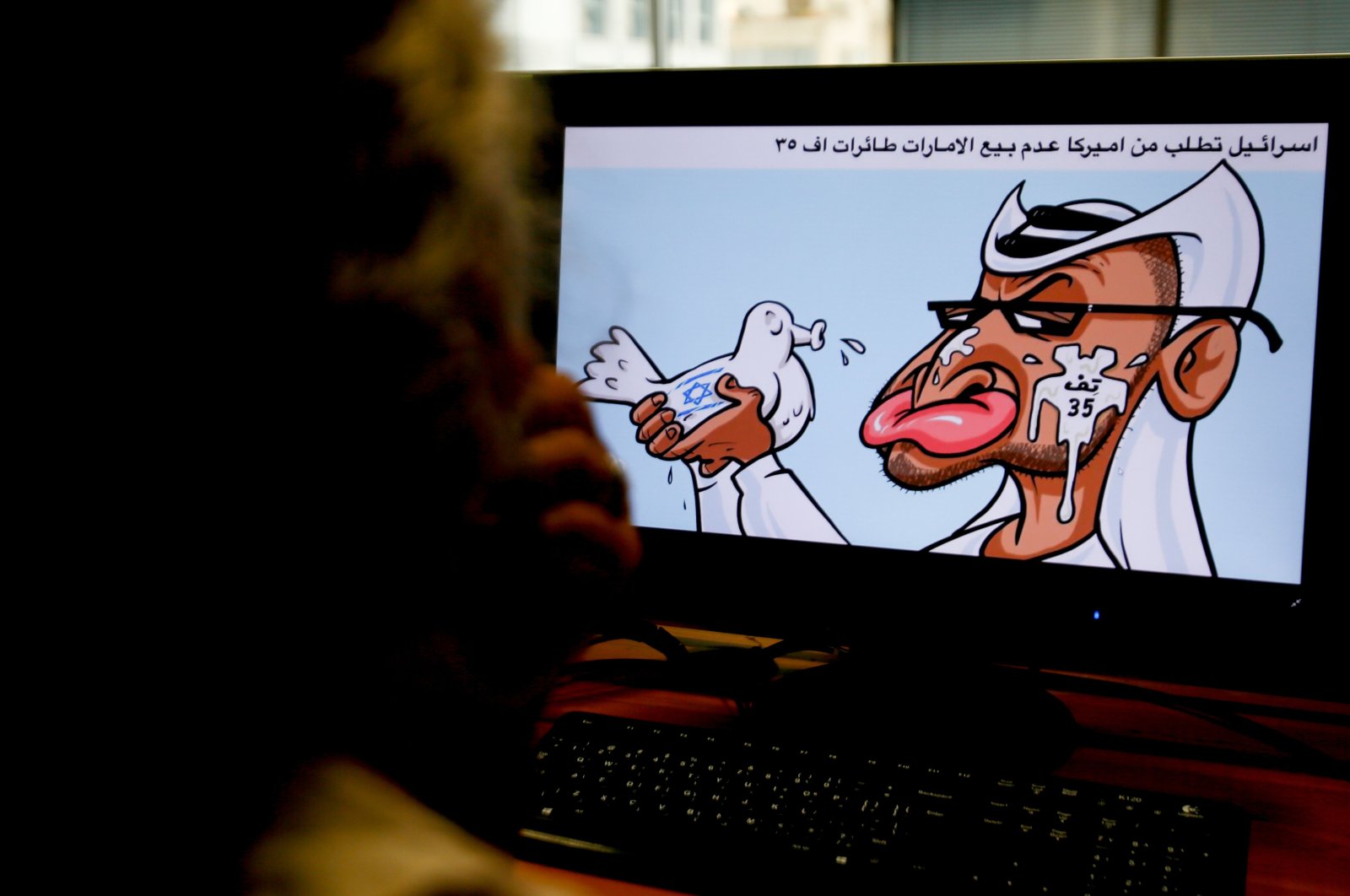 A woman looks at a caricature by Jordanian cartoonist Emad Hajjaj depicting the leader of the United Arab Emirates (UAE), Sheikh Mohammed bin Zayed al-Nahyan, holding a dove with Israel's flag on it spitting in his face with Arabic writing referring to Israel's opposition to the sale of U.S. F-35 aircraft to the UAE, on Aug. 27, 2020. (AFP Photo)
by DAILY SABAH WITH AA Aug 29, 2020 7:08 pm
RECOMMENDED

United Arab Emirates (UAE) has sent many spy agents to Syria to train YPG/PKK terrorists over the past few years, Anadolu Agency (AA) has learned from multiple sources.

After holding secret talks with the terrorists in 2017, the UAE sent intelligence officers in the area the following year.

These trainings were held in Qamishli, Hassakeh and Deir el-Zour in northeastern Syria.

The Emirati officers also established a secret direct hotline with the terrorists.

The AA also has the codenames of these agents.

The agent code-named Abdullatif Abdulkadir Hamrush stayed in terror camps in Qamishli for a year giving trainings on information security and signal intelligence.

Mohammed Abdulkadir al-Shehhi, another UAE agent, carried out killings on behalf of the terrorists in Syria.

Back in June, it is revealed that UAE supports PKK terrorist group in Iraq's northern Kurdish-administered region financially.

Speaking to the London-based Al-Araby Al-Jadeed newspaper, a security source at the Kurdish Regional Government (KRG) noted that authorities have imposed limitations on money transfers from the UAE.

The newspaper claimed that the move came after the terrorist group appeared to have received financial aid from the UAE in recent months.

The security source in Irbil, who preferred anonymity due to security reasons, said the KRG has asked to obtain a "proof of approval" from security authorities over money transfers coming from the UAE to the region's foreign exchange offices and bank accounts.

He added that the new measure is required for money transfers exceeding $1,000 and this measure will be applied to all exchanges in Irbil, Duhok and Sulaymaniyah.

Ties between Turkey and the UAE have been strained by Ankara's support for Qatar after four Arab countries including the UAE imposed sanctions on Doha in 2017.

Turkey has also revealed a UAE spy network that has been operating all over the country. The proof, which was revealed through security forces investigating the case, demonstrated that the link with the network also had support from the CIA in their operations. The leader of the spies who were captured in April was identified by the National Intelligence Organization (MIT), revealing the details of the network. Disclosed only by his initials, H.E.R. was one of the key figures in the spy chain who was also determined to be the leader of two others who were detained.