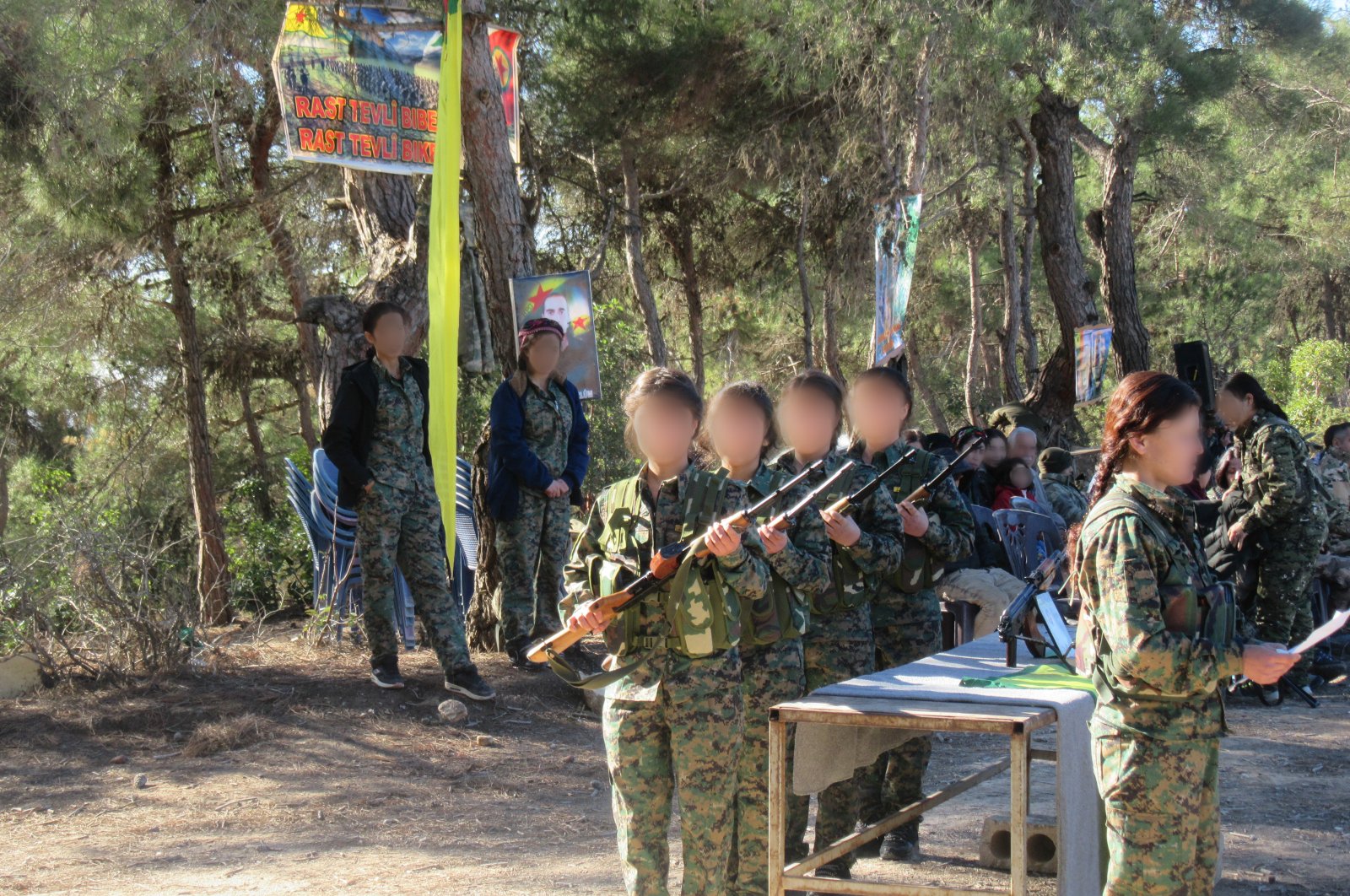 Despite being called out numerous times by human rights organizations, the U.S.-backed YPG/PKK terrorists have insisted on trampling international law by forcibly recruiting four more children – two girls and two boys – within a week by kidnapping them from their families in Syria.

The four children, who were under the age of 16, were from the northeastern Syrian towns of Ain-al Arab, Qamishli and al-Darbasiyah. The families of 14-year-old Cudi Omar, 15-year-old Dijvar Juma, 15-year-old Lina Halaf and 14-year-old Jaklin Ayyub report that they have not heard from their children in over a week.

The kidnapping of the children is the latest instance of child recruitment by the terrorist group. The last incident took place last month when at least four girls between the ages of 11 and 17 were kidnapped in the war-torn country.

Having suffered severe blows in recent years, the YPG/PKK has established teams to seek out and brainwash such children and teenagers, forcing them to join the terrorists’ ranks by threatening them if they do not cooperate.

According to reports by security forces, these teams have kidnapped Syrian orphans between the ages of 10 and 15 and taken them to terrorist camps to indoctrinate them with their ideology, training them for armed combat once they turn 16.

The terror group has prevented these children from seeing their families, torturing and imprisoning those who insist on doing so.

Several members of the terror group who surrendered to security forces earlier this year confirmed these reports, confessing to judicial authorities that children were forcibly recruited.

In their testimonies, terrorists said at least 30 to 50 children were indoctrinated in four locations: Gare in Iraq and Derik, al-Hasakah and Qamishli in Syria. Locals in YPG/PKK-controlled areas have long suffered from YPG/PKK atrocities – including kidnappings, recruitment of child soldiers, torture, ethnic cleansing and forced displacement. Although many northern Syrian areas have been cleared of the terrorists through Turkish military operations, the YPG/PKK continues to disrupt peace by infiltrating liberated areas.

Some of the families whose children have been kidnapped by the terrorist group are unable to talk about the situation out of fear. Others, however, harness social media to bring awareness to their plight, calling on the YPG/PKK to release the kidnapped children.

"My daughter was kidnapped forcibly. Her mother is sick and cries all the time (for her daughter)," Dara Dari, the father of 11-year-old Ronida who was kidnapped on June 20 in Amuda district, said in a Facebook post.

Similarly, the mother of 15-year-old Jihan Suleiman, who was kidnapped on June 5, also shared a video on social media, demanding her daughter's return.

"We haven't been able to reach out to her for 25 days. We don't know how she was captured. We heard later on that she was captured by the terrorist group," the sorrowful mother said in the video.

The YPG/PKK’s use of child soldiers has been repeatedly documented and criticized by international human rights organizations, including Amnesty International and Human Rights Watch (HRW). The group reportedly tricks families into giving up their children or outright kidnaps them, taking them to training camps where they are denied contact with their families. HRW documented that the terrorist group continues to recruit children despite objections from families and prevents parents from getting in touch with their children.

In its Trafficking in Persons Report 2020 published June 26, the U.S. Department of State also said the terrorist organization had forced children to fight.

The report said the YPG/PKK “continued to recruit, train and use boys and girls as young as 12 years old,” adding that since 2017, international observers have reported that the terrorists “recruit, at times by force, children from displacement camps in northeast Syria.”

Despite being aware of the brutal actions of the group, under the pretext of fighting Daesh, the U.S. has provided military training and given truckloads of military support to the YPG/PKK, despite its NATO ally's security concerns. While underlining that one cannot support one terrorist group to fight another, Turkey conducted its own counterterrorism operations, over the course of which it has managed to remove a significant number of terrorists from the region.

The U.S. support to the YPG reached to a point that the country, in order to protect the terrorist group from the side effects of the Caesar Syria Civilian Protection Act, the U.S. authorities provided the terrorist organization with $21 million in support last month.

The Caesar Act punishes under U.S. law any company that works with Assad and was named after a military forensic photographer code-named "Caesar" who leaked photos of people tortured to death in Assad prisons in 2014. The act came into force as of June 17.

Virginia Gamba, the U.N. secretary-general’s special representative on children in armed conflicts, met with a YPG/PKK terrorist in June 2019 in Geneva and signed a deal to end the recruitment of child soldiers, another proof of the terror group’s war crimes and crimes against humanity.

No other U.N. reports have been published since then, in compliance with this deal, nor has the practice come to an end.

In its more than 40-year terror campaign against Turkey, the PKK, listed as a terrorist organization by Turkey, the U.S. and the European Union, has been responsible for the deaths of 40,000 people, including women, children and infants. The YPG is the PKK's Syrian offshoot.The two intertwined terrorist groups pursue a similar policy on child recruitment, as the PKK, like the YPG, has kidnapped children in Turkey, provoking protests from victimized families in the southeastern province of Diyarbakır, outside the offices of the Peoples' Democratic Party (HDP), a party accused by the government of having links to the terror group.

A similar protest is also taking place in Germany as a German-Turkish mother is demanding the return of her daughter who was forcibly recruited by the PKK.