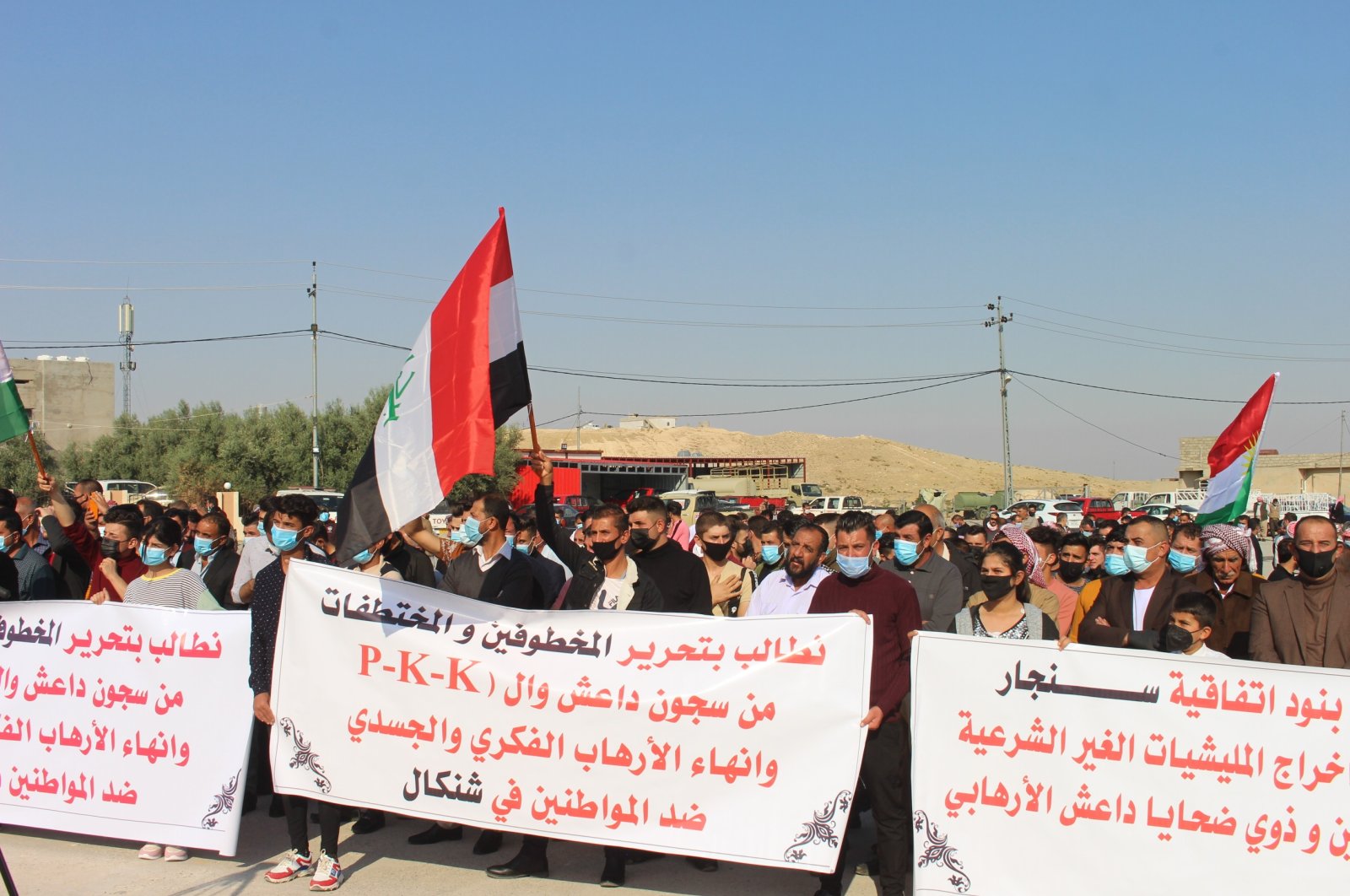 Hundreds of Yazidis staged a demonstration against the terrorist PKK's presence in northern Iraq's Sinjar and demanded the release of their kidnapped children on Sunday.

The group of protesters held a demonstration in the Sinjar district, holding placards saying "Save our children from PKK and Daesh prisons" and "Kidnapping and recruiting children as militants violate international law."

Similar protests have been held by Kurdish mothers and families, whose children were abducted by the YPG/PKK, in southeastern Turkey’s Diyarbakır. They have staged a sit-in protest in front of the pro-PKK Peoples' Democratic Party (HDP) provincial headquarters for more than a year now.

In 2018, a U.N. annual report on children in armed conflict revealed 224 cases of child recruitment by the YPG/PKK between January and December in 2017, a fivefold increase compared with previous years.

HRW also documented that the terrorist group continues to recruit children despite objections from families and prevents parents from getting in touch with their kids.

A protester in Sinjar told the Anadolu Agency (AA) that they demand the Kurdistan Regional Government (KRG) and the Iraqi central government to ensure safety and security in Sinjar by regaining complete control from the PKK terrorists.

"Right now I cannot return to my home because it really is not safe to do so."

Another demonstrator said they are protesting to safely return to their homes and stability in the region.

"This is why we demand the implementation of the agreement between the Iraqi central government and the KRG," the protester said, adding that they still hope to return to their homes even though the agreement has been long-delayed.

On Oct. 9, the Iraqi Prime Ministry announced it had reached a "historic deal" with the KRG, an agreement that would bolster the Iraqi federal authority in Sinjar under the constitution in terms of governance and security.

According to the agreement, new district governors and other administrative units will be appointed in Sinjar.

In line with the deal, the Sinjar police forces are expected to ensure security in cooperation with the central security agency and the KRG forces.

The KRG has previously called the presence of terrorist groups, such as the PKK, in Sinjar unacceptable and urged the militants to leave the area.

Sinjar falls within an area disputed between the central government in Baghdad and the KRG, based in Irbil, according to Article 140 of the Iraqi constitution.

The announcement came following a meeting between the representatives from both sides.

The PKK terrorist group managed to establish a foothold in Sinjar in mid-2014, on the pretext that it was protecting the local Yazidi community from Daesh.

Since then, the PKK has reportedly established a new base in the area for its logistical and command-and-control activities.