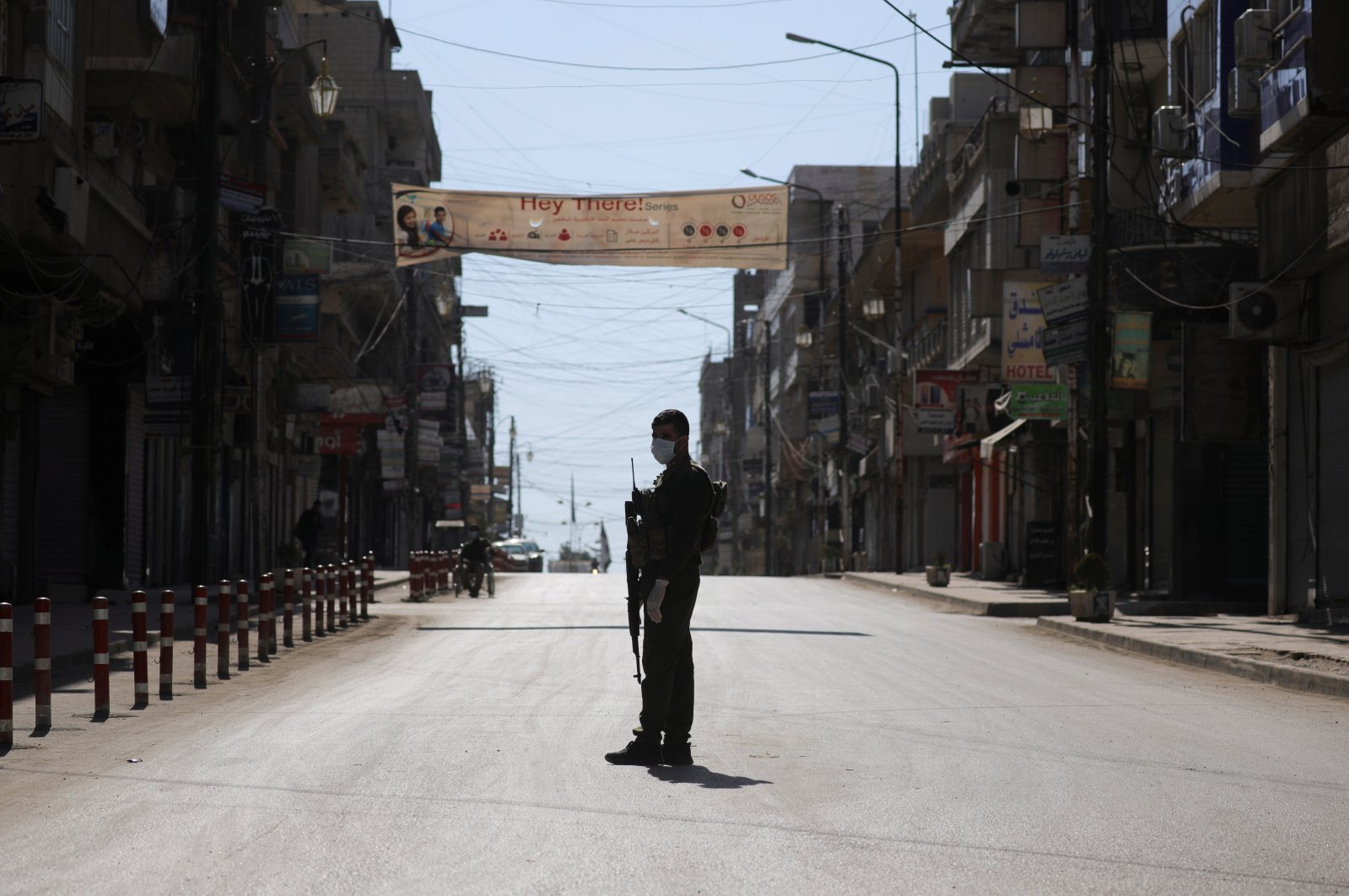 A YPG/PKK member stands near closed shops along an empty street as restrictions are imposed as a measure to prevent the spread of the coronavirus in Qamishli, Syria, March 23, 2020. (Reuters Photo)
by Daily Sabah with AA Jan 08, 2021 12:03 pm
RECOMMENDED

The PKK terrorist group's Syrian affiliate YPG has laid siege to the town of Qamishli of northwestern Syria’s Hassakeh province again, which is held by the Bashar Assad regime, as the recent rift between the two sides continues to remain unresolved.

Anadolu Agency (AA) reported Friday that the two sides are on the verge of a military conflict over a dispute about control of some surrounding territories. The tension that culminated on Jan. 3 resulted in YPG/PKK’s three-day siege of Qamishli, which slackened Thursday thanks to Russian interference. However, as mutual talks brought no results, YPG/PKK terrorists have relaunched an encirclement of the military area located in the center of the town, which is currently controlled by regime forces.

The tension was initially fueled due to pressure from both the Syrian regime and Russia on the YPG/PKK terrorists to leave the town of Ain Issa in northeastern Syria to the regime's control.

On Dec. 28, 2020, the YPG/PKK terrorists responded to the pressure by capturing members of the regime forces. After the YPG/PKK refused to release the captured regime members, regime forces reacted by detaining some of the group's terrorists in the town.

Russia interfered immediately at the time and facilitated the release of the captured and detained people from both sides. However, the tension escalated on Jan. 3 as YPG/PKK once again captured regime members, including high-ranking officials. The regime again retaliated against the move.

As a result, on Jan. 4 the regime-held area, known as "security circle," was occupied by YPG/PKK terrorists up until Russia's re-interference on Wednesday.

While the YPG/PKK continues its occupation of the majority of Hassakeh, the Assad regime controls Kevkep Mountain in the center of the province. Regime forces also have an airport in Qamishli and a military brigade as well as a security branch. Some state institutions in the province are also under the control of the Assad regime.

AA reported on Dec. 28 that Russia continues to intensify its military presence in northeastern Syria, increasing the number of its troops to 1,000 in Hassakeh.

During the month of December, the Russian Armed Forces sent hundreds of armed vehicles and logistics trucks from its Hemeimeem Air Base in Latakia to the town of Qamishli in Hassakeh.