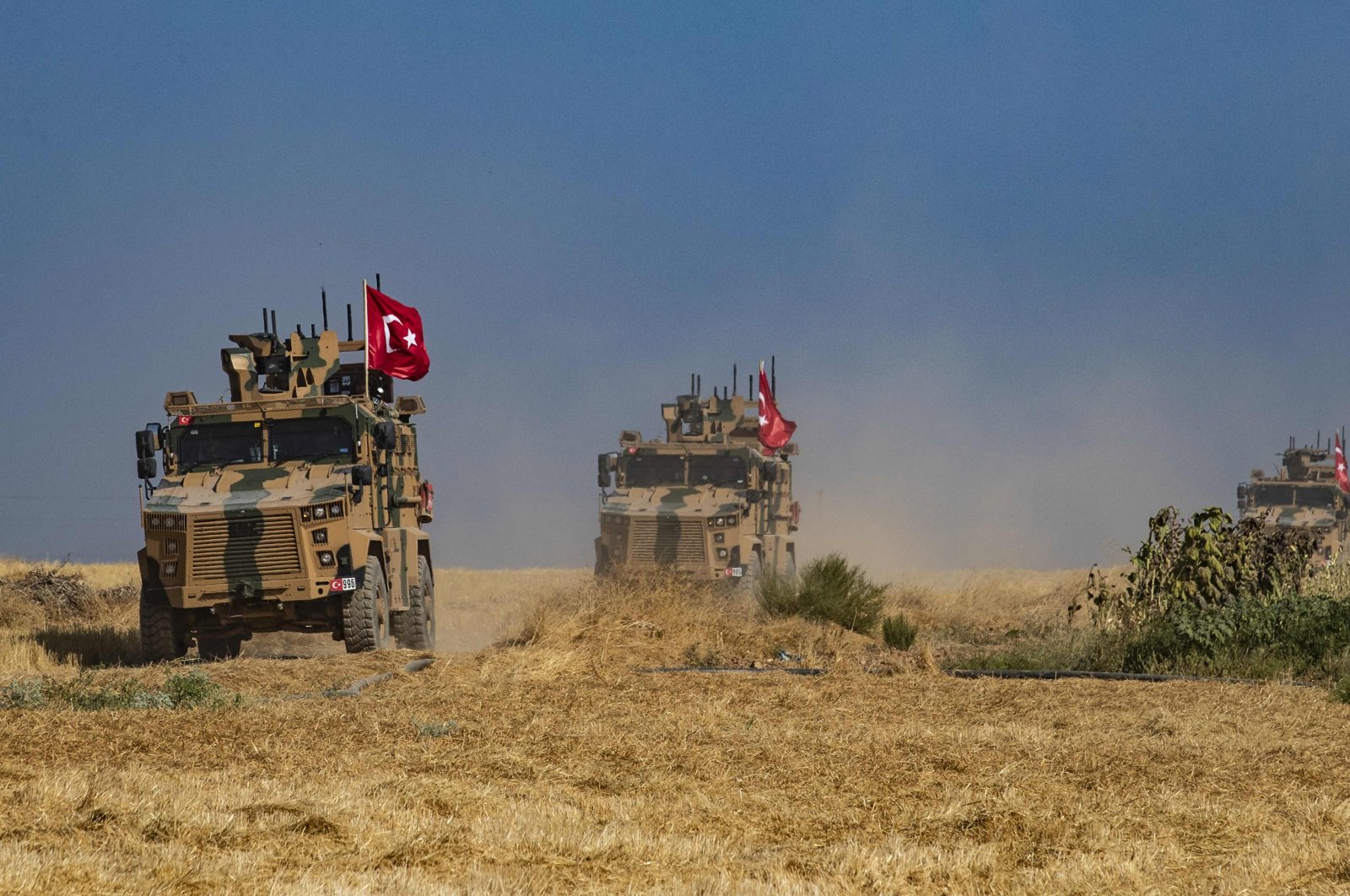 Turkish military vehicles patrol in the Syrian village of al-Hashisha on the outskirts of Tal Abyad town along the border with Turkey following a cross-border anti-terror operation against YPG terrorists, Oct. 4, 2019. (AFP Photo)
by DAILY SABAH WITH AA Aug 09, 2020 12:03 pm

Although the recent U.S. Lead Inspector General's report revealed that the YPG continues to recruit children despite former pledges, it underlined that the terror group's partnership with Washington would endure

The YPG, the Syrian branch of the PKK terror group, has been recruiting child soldiers from displacement camps in northeastern Syria despite pledges to stop the practice, according to a recently released U.S. Lead Inspector General's report.

The document, which quotes the annual Trafficking in Persons Report issued by the U.S. State Department, says that YPG terrorists are still using and recruiting children for military training despite adopting an action plan, mandated by a United Nations Security Council Resolution, in July 2019 to end such practices.

The YPG/PKK's use of child soldiers has been repeatedly documented and criticized by international human rights organizations, including Amnesty International and Human Rights Watch (HRW). The group reportedly tricks parents into giving up their children or outright kidnaps them, taking them to training camps where they are denied contact with their families.

In 2018, a U.N. annual report on children in armed conflict revealed 224 cases of child recruitment by the YPG/PKK between January and December 2017, a fivefold increase compared with previous years.

HRW also documented that the terrorist group continues to recruit children despite objections from families and prevents parents from getting in touch with their kids.

A website affiliated with the terrorist group, Nuçe Ciwan, praised the children as though they had willingly joined their ranks, calling them “young women."

“Young women from Rojava joined the ranks of the PKK,” the website said in an article, which focused on the obviously underaged children.

Turkish people took to social media, condemning the terrorist group for its efforts to recruit more children, which is a felony in both Turkish and international law.

Since its foundation, the PKK has forcibly taken at least one child from families who do not "pay taxes" in support of the group. To fill its ranks, the PKK has continuously raided villages and kidnapped young adults from the ages of 15 to 20 through violent means. In addition to forced recruitment, the PKK also conducts propaganda, mainly targeting university students. The terror group's approach has remained largely consistent, according to statements by captured or surrendered members of the organization.

The terror organization cares a great deal about women and young people's support, and there is no age restriction in the organization. Every person who can go out independently from their parents is considered an adult. In order to lure young people, it emphasizes values such as heroism and sacrifice and tries to influence young people psychologically.

The report also underlined that the U.S. still has a strong relationship with the YPG terrorists and supports the group in securing key petroleum infrastructure in eastern Syria. It added that despite the U.S. remaining the partner of choice for the YPG, the terrorist group has recently increased its cooperation with Russia and the Syrian regime, particularly following Turkish cross-border anti-terror operations.

The report said that the YPG had bolstered its security presence near major oil and gas fields in northeastern Syria, and remained co-located with coalition forces whose protection the YPG terrorists still depend on. It added that the YPG has attempted to use oil and gas resources as a bargaining chip during intermittent reconciliation negotiations with the Syrian regime.

It also reported that power-sharing between the YPG-led groups and Arab leadership in northeastern Syria remains imbalanced. As the report stated, the YPG terrorists have made limited efforts to incorporate Arab military and civil leaders into their ranks. It said that local Arabs occupy some positions on YPG-associated military and civilian institutions but lack equal influence and feel excluded from military and political decision-making processes.

The U.S. has primarily partnered with the YPG in northeastern Syria in the anti-Daesh fight. Turkey strongly opposes the YPG's presence in northern Syria, which has been a major sticking point in strained Turkey-U.S. relations. The U.S. has provided military training and given truckloads of military support to the YPG, despite its NATO ally's security concerns.

In its more than 40-year terror campaign against Turkey, the PKK – listed as a terrorist organization by Turkey, the U.S. and the European Union – has been responsible for the deaths of 40,000 people, including women, children, and infants. The YPG is the PKK's Syrian offshoot.