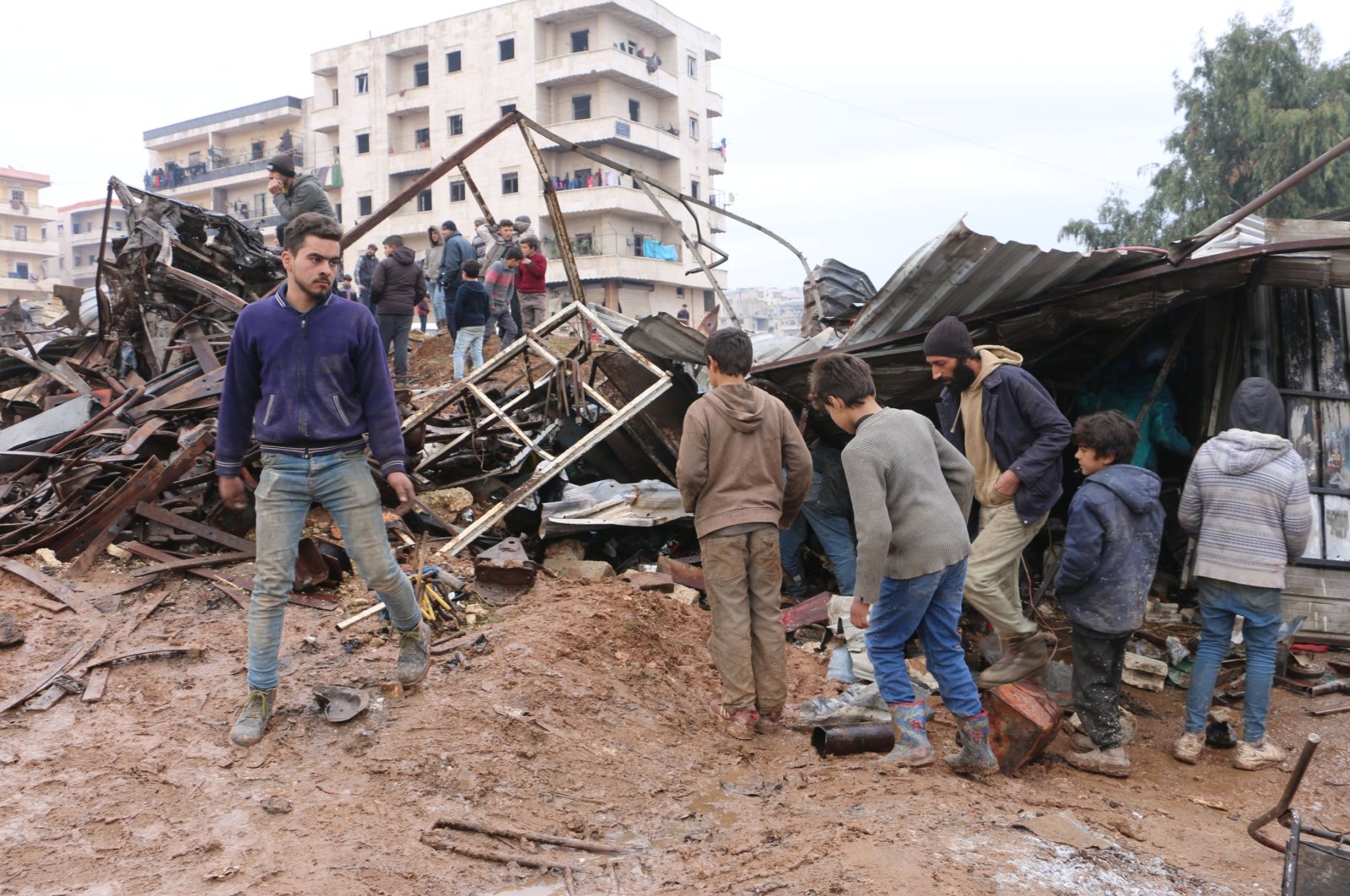 Onlookers look at damaged buildings in the aftermath of a car bomb targeting an industrial area in the town of Afrin, northern Syria, Jan. 30, 2021. (AA Photo)
by Anadolu Agency Oct 29, 2021 9:27 am

A SETA report analyzes the increasing PKK/YPG car bombings in northern Syria, finding the terrorist attacks aim to create "chaos and disorder" in the region

Turkey's Ankara-based Foundation for Political, Economic and Social Research (SETA) published the report titled "The Logic of YPG Car Bomb Attacks in Syria – A Strategy of Chaos and Disorder" by analysts Ömer Özkizilcik and Kutluhan Görücü.

In its more than 35-year terrorism campaign against Turkey, the PKK – listed as a terrorist organization by Turkey, the United States and the European Union – has been responsible for the deaths of some 40,000 people, including women, children and infants. The YPG is its Syrian branch.

"The use of car bombs has been a concerted YPG strategy since Operation Olive Branch was conducted by the Syrian National Army and the Turkish Armed Forces," the report said.

"The strategy of the YPG terrorism campaign aims to create chaos and disorder," it noted.

According to the report, by doing so, the YPG has three goals.

First, it aims "to force the governing body to implement harsher security measures and drive the people away from governance."

The second is "to prevent the return of Syrians to Syria in order to preserve their prospect of a Marxist Kurdish statelet in northern Syria reaching from Iraq to the Mediterranean."

And lastly, it aims "to portray their areas as relatively more secure than the areas held by the Syrian interim government."

The report also highlighted that "to understand the reasoning and motives of the YPG attacks against the areas of the Syrian interim government in northern Syria, one has to look into the reasoning behind the PKK's attacks in Turkey."

According to the report, "The two suicide attacks by female YPG members Arin Mirkan and Avesta Khabur are significant events that indicate a change in the PKK/YPG's strategy."

The report points out that Mirkan detonated herself with a grenade as she ran toward Daesh militants during clashes between the YPG and Daesh in 2014.

In 2018, "to stop the offensive by the Syrian National Army and the Turkish Armed Forces, Avesta Khabur infiltrated a military position and blew herself up."

Supported by statements from various news outlets that both actions were praised as exemplary attacks by the PKK/YPG, the report shared the information that the PKK carried out 26 suicide attacks and 51 car bombings in Turkey between 2014 and 2018.

The report also shared information from news sources on how the two attacks were praised by the terrorist group and added that the PKK conducted 26 suicide attacks in Turkey between 2014-2018.

The report also pointed out that in June 2018, "shortly after Khabur's suicide attack and the resolution of the military situation in Afrin with the successful conclusion of Operation Olive Branch, the YPG started to employ car bomb attacks as a strategy."

According to the report, since Khabur's attack, the "PKK has not conducted or been able to conduct a single terrorist attack with a car bomb, a suicide vest or suicide car bombing in Turkey."

The report also focuses on attacks in northern Syria between 2018-2021.

"When it comes to the geographical density and geographical targets of the car bomb attacks, one notices first that the attacks are limited to the areas of the Syrian interim government where the Syrian National Army and the Turkish Armed Forces launched three separate military operations," according to the report.

"Among the most preferred target sites are Afrin, al-Bab, Ras al-Ain, Azaz and Jarablus," it added. "The focus on these four towns is an additional indicator that the YPG is behind these attacks."

According to the report, "from the 192 attacks, 177 targeted the civilian/social sphere. While seven targets remain unknown, only eight were against the military, police or Syrian officials."

The report also called on the international media "to take responsibility."

"The YPG is a terrorist group that values its international image and explicitly targets the international media with its propaganda," it said.

"Until now, the international media have either ignored the car bombs or have described them as acts without culprits. Media coverage without naming those responsible or media ignorance on this topic has encouraged the YPG to continue its terrorism campaign."