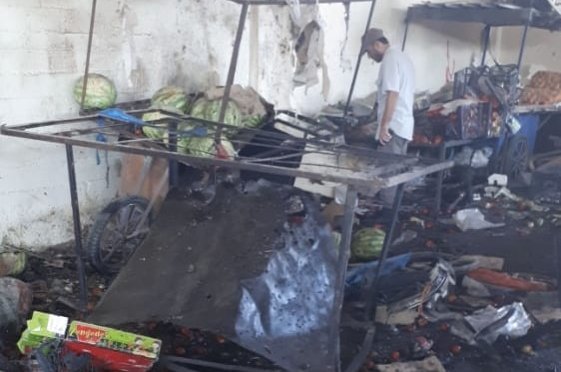 "Terrorists, the enemy of humanity, detonated an IED (improvised explosive device) they planted in the marketplace and massacred five civilians, injured 12 others," the ministry said on Twitter.

It added that the YPG/PKK once again targeted innocent civilians to disrupt the peaceful environment in the Operation Peace Spring area.

The explosion took place in the center of Ras al-Ain, a city near the Turkish border.

Turkey launched Operation Peace Spring on Oct. 9 to eliminate YPG/PKK terrorist elements east of the Euphrates to secure the country's borders, aid in the safe return of Syrian refugees and ensure Syria's territorial integrity. As part of the operation, on Oct. 12, Ras al-Ain was officially free of terrorist elements.

"Our heroic commandos, who are involved in all types of operations in the region, neutralized three YPG/PKK terrorists – preventing yet another attempt to attack," the ministry said on Twitter.

It added that they would not allow terrorists to disturb the peace and security in the Operation Peace Spring zone.

Since 2016, Turkey has launched a trio of successful anti-terrorism operations – Euphrates Shield (2016), Olive Branch (2018) and Peace Spring (2019) – across its border in northern Syria to prevent the formation of a terror corridor and enable peaceful settlement by locals.

In its more than 40-year terror campaign against Turkey, the PKK – listed as a terrorist organization by Turkey, the U.S. and the European Union – has been responsible for the deaths of nearly 40,000 people, including women and children. The YPG is the PKK's Syrian offshoot.