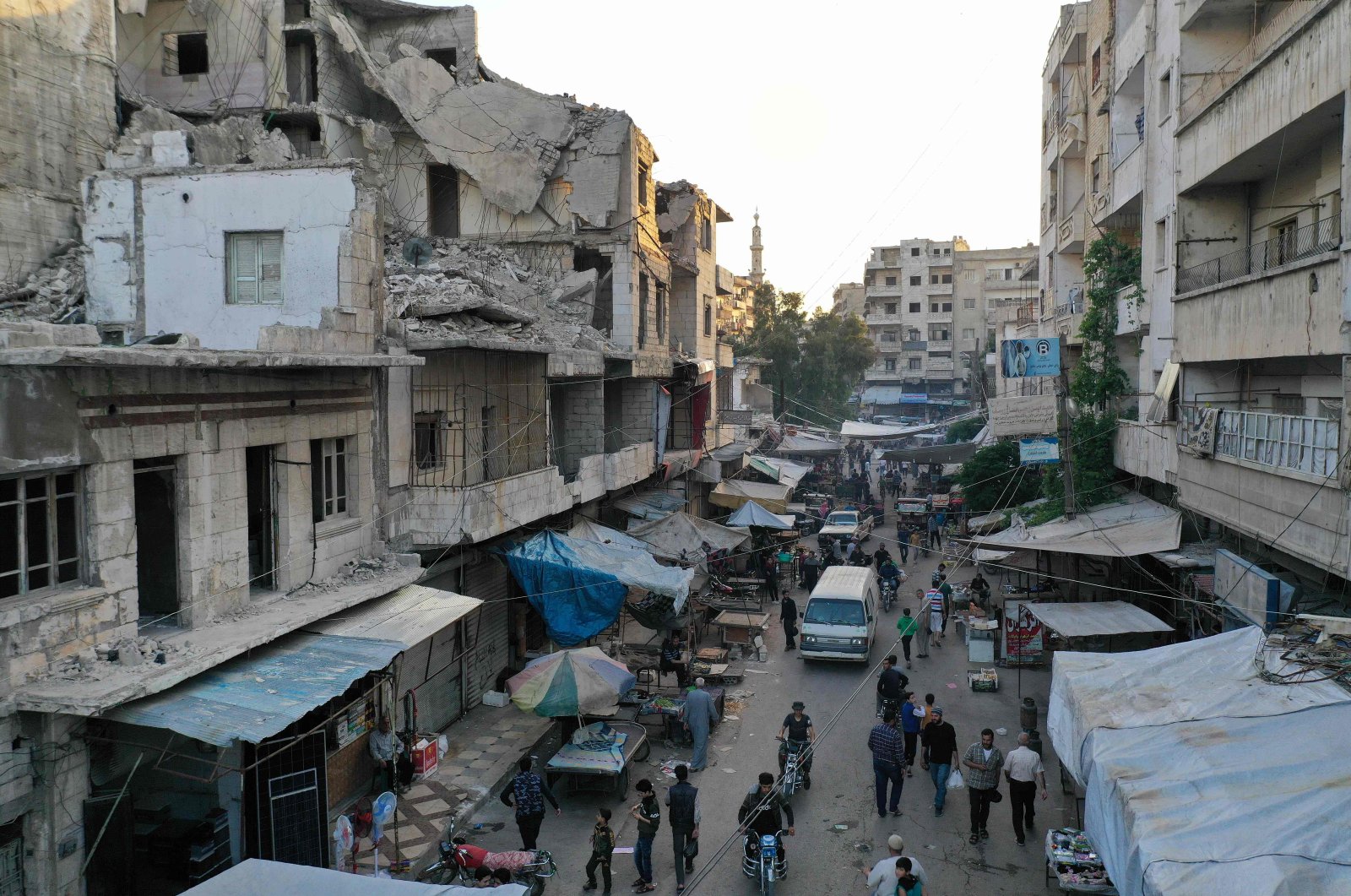 An aerial view of a market street (with heavily damaged buildings nearby) in Ariha in the southern countryside of Syria's Idlib province before sunset during the Muslim holy fasting month of Ramadan, May 15, 2020. (AFP Photo)
by Daily Sabah with Reuters May 20, 2020 11:51 am

While the U.N. aid chief appealed for renewal of authorization for the delivery of aid through two border crossings from Turkey, Western countries led by the U.S. proposed the reopening of a third gate despite Russia's objection

Western countries in the United Nations Security Council on Tuesday proposed to increase the number of border crossings for the delivery of aid to Syria during a meeting on humanitarian aid operations in the war-torn country.

The council in January allowed a six-year-long cross-border aid operation to continue from two places in Turkey for six months, but dropped crossing points from Iraq and Jordan because of opposition by Russia and China.

It needs to adopt a resolution, which has been in effect since 2014, to renew approval by July 10.

U.S. Ambassador to the U.N. Kelly Craft pushed the council to reauthorize aid deliveries from the Iraq crossing point, saying the closing of two border gates has limited the access of aid operations to the region.

France and the U.K. also supported the U.S. proposal.

However, Russian U.N. Ambassador Vassily Nebenzia said, "Do not waste your time on efforts to reopen the closed cross-border points."

Meanwhile, the U.N. aid chief Mark Lowcock appealed for the Security Council to renew authorization for the delivery of aid through two border crossings from Turkey during the meeting, describing the access as a "lifeline for millions of civilians."

Until the end of 2019, there were four border gates that led to various points in Syria from the neighboring countries of Turkey, Iraq and Jordan. The names of the border gates are Bab al-Salam and Bab al-Hawa in Turkey, Al-Yarubiyah in Iraq and Al-Ramtha in Jordan. Thanks to these gates, millions of people in Syria received humanitarian aid regularly. However, Russia and China proposed shutting down the border gates in Jordan and Iraq with the claim that they are "ineffective," and the two countries also proposed reviving the decision for only six months instead of a full year.

On the other hand, Turkey had proposed the opening of a fifth gate in southeastern Turkey for the purpose of delivering humanitarian aid, supported by not only Turkey itself but also a majority of U.N. countries. However, one problem that has prevented this idea from turning into reality is the constant rejection of it by Russia and China. While Turkey hoped to increase the capacity of humanitarian aid to Syria, Russia and China opposed the idea and suggested decreasing the number of border gates to just two.

The U.S. also became one of the main countries that welcomed Turkey's offer. The country's U.N. envoy said in December that for the next year, the U.S. is determined to support the humanitarian aid resolution for Syria, including Turkey's idea of a fifth gate.

According to the U.N., the revival of the decision has critical importance. Lowcock said previously that there is no alternative for the cross-border aid, and currently, approximately 4 million people in Syria are in need of this aid.

The U.N. has suggested that the Tal Abyad border crossing between Syria and Turkey could be used to deliver aid to civilians in northeast Syria after Russia and China blocked the world body from using a crossing point on the Iraqi border to provide help.

In February, the 15-member council also asked Secretary-General Antonio Guterres to report back on any possible alternative routes to the Al-Yarubiyah crossing between Syria and Iraq to ensure aid deliveries. Western diplomats have said Al-Yarubiyah's closure cuts off 40% of medical aid to northeastern Syria.

"If viable alternatives to Al-Yarubiah are not found for medical items, the gap between the humanitarian response and humanitarian needs will increase," Guterres wrote in his report to the council.

"From a security and logistical perspective, in the current context, the Tal Abyad border crossing would constitute the most feasible alternative," he said.

The report said that in December 2019 there were 103 medical facilities being supported by aid groups across northeast Syria.

During the meeting, growing tensions between China and the U.S. around the coronavirus pandemic publicly spilled as envoys traded barbs over global leadership.

Craft called on China "to validate its claims of global leadership in combating COVID-19" by supporting "a resolution to allow the U.N. to combat this pandemic by delivering life-saving aid cross-border" into Syria.

Responding, China's U.N. Ambassador Zhang Jun said Beijing urged the U.S. to focus on global efforts to fight the virus, "stop playing political games and really focus on saving lives and stop diverting (from) its own responsibilities to other countries."

The U.S. has questioned China's transparency about the outbreak. Last month Washington suspended funding for the World Health Organization (WHO), accusing the U.N. agency of promoting Chinese "disinformation." The WHO denied the accusation, and China said it was being transparent.

A stand-off between the Security Council veto-powers has also stymied a monthslong attempt by the body to agree on a resolution backing Guterres' call for a global cease-fire so the world can focus on the pandemic.

The virus has infected over 4.8 million people and 319,000 have died. It first emerged in Wuhan, China late last year.