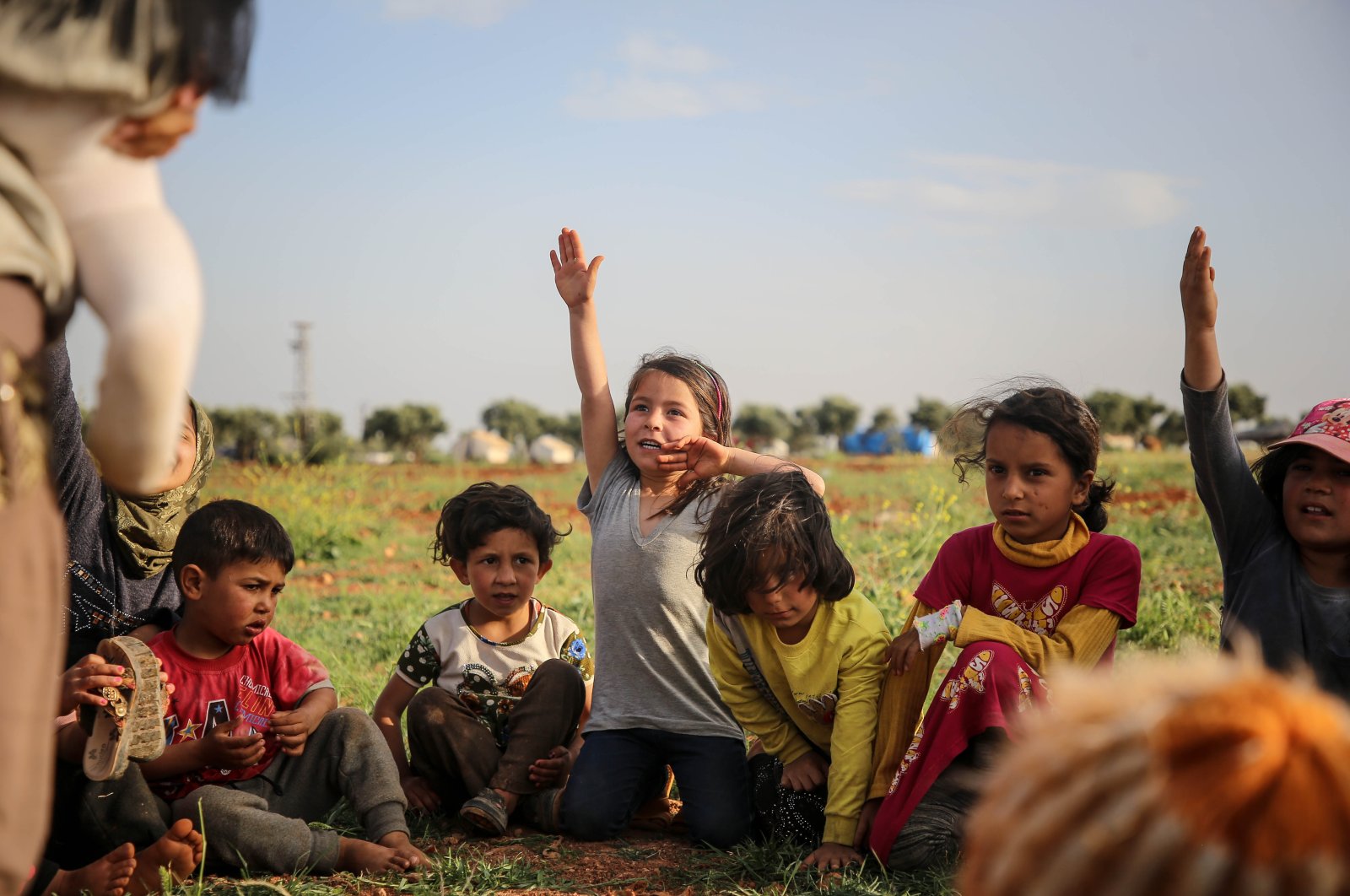 Students in a camp city near Idlib do their courses out in the open since schools are closed due to the coronavirus pandemic, northern Syria, May 7, 2020. (AA Photo)
by Dilara Aslan May 07, 2020 12:37 pm
Edited By Gabriela Garver

At least 235,000 people have returned to Syria's war-torn Idlib after 1 million were displaced by continuous attacks, however, in order to preserve the calm and enable more to return, the international community has to continue putting pressure on the Assad regime

As more and more people start to return to Syria’s northwestern Idlib and Aleppo provinces after months of enduring heavy attacks by the Bashar Assad regime and its backers, the people in the region now face the next disaster: COVID-19. Tensions have decreased since a cease-fire was agreed on for the region; however, the White Helmets warn that the international community must keep up pressure to ensure the regime does not renew its assault on the last opposition bastion.

“There is a relative calm in the Syrian north compared to the last period,” Raed Al Saleh, director of the Syrian civil defense group White Helmets told Daily Sabah. “This does not mean that the regime is committing to the cease-fire, and there is limited return movement of IDPs (internally displaced people) to their areas in the Idlib and Aleppo countryside, from which the regime and its Russian ally have forcibly displaced them during their latest military campaign.”

Saleh stressed that most people are having doubts about returning because of the fear of a renewed attack on the region. “They cannot return as long as the regime continues to violate the cease-fire, so international and United Nations pressure is required now more than ever to spare civilians in the Syrian north a new tragedy.”

Meanwhile, the group had announced Wednesday that over 235,000 displaced Syrians had returned to their homes in Aleppo and Idlib since the start of the cease-fire. Yet Saleh pointed out that this was only a small percentage of the actual number that fled from regime attacks.

At a time when most of the world is seeking safety in their homes against the pandemic, residents and health personnel had to flee theirs in Idlib. According to the U.N., about 1 million Syrians fled Idlib and its surrounding countryside this past year after Russian-backed regime forces stepped up a campaign to retake the last opposition stronghold after nine years of war. Many medical workers have also fled or their ability to deliver life-saving assistance has been crippled.

Fighting has calmed since March when Ankara agreed on a cease-fire with Moscow, which has supported Damascus with heavy airpower. The cease-fire in Idlib was reached in Moscow last month after talks to contain the escalating conflict. The cease-fire deal came amid recent clashes between the Turkish military and Syrian regime forces that left many dead on both sides.

“The lack of real guarantees to secure their safety is the most important reason why people do not return,” Saleh elaborated, indicating that the Assad regime had previously ignored countless cease-fire attempts. “At the same time, the regime did not stop threatening (to storm) the area, considering the cease-fire ‘temporary,’” he added.

Yet he also underlined the necessity of displaced people returning from camps and overcrowded settlements to their home vis-a-vis the coronavirus pandemic. “The situation of civilians should be improved and their return to their homes should be facilitated especially because most of the camps where they live lack minimum services," Saleh said.

Syria has so far confirmed 44 cases of COVID-19, including three people who died and 27 who recovered, as of May 5.

Local authorities have introduced a number of preventive measures in the northwest, including the closure of schools and some markets and private clinics, banning the gatherings of people, including for religious services, and reducing services or operating hours of businesses including restaurants and grocery stores. However, since the children in the region do not have the luxury or the technical infrastructure to follow courses remotely, most of them are deprived of their education.

Yearslong sieges caused the deterioration of the physical health of many people, who have suffered from malnutrition and widespread poverty. Another risk is that people often live in overcrowded places and camps – ideal for the spread of the virus. The camps are generally in poor condition with a lack of access to water, hygiene, medical aid and food.