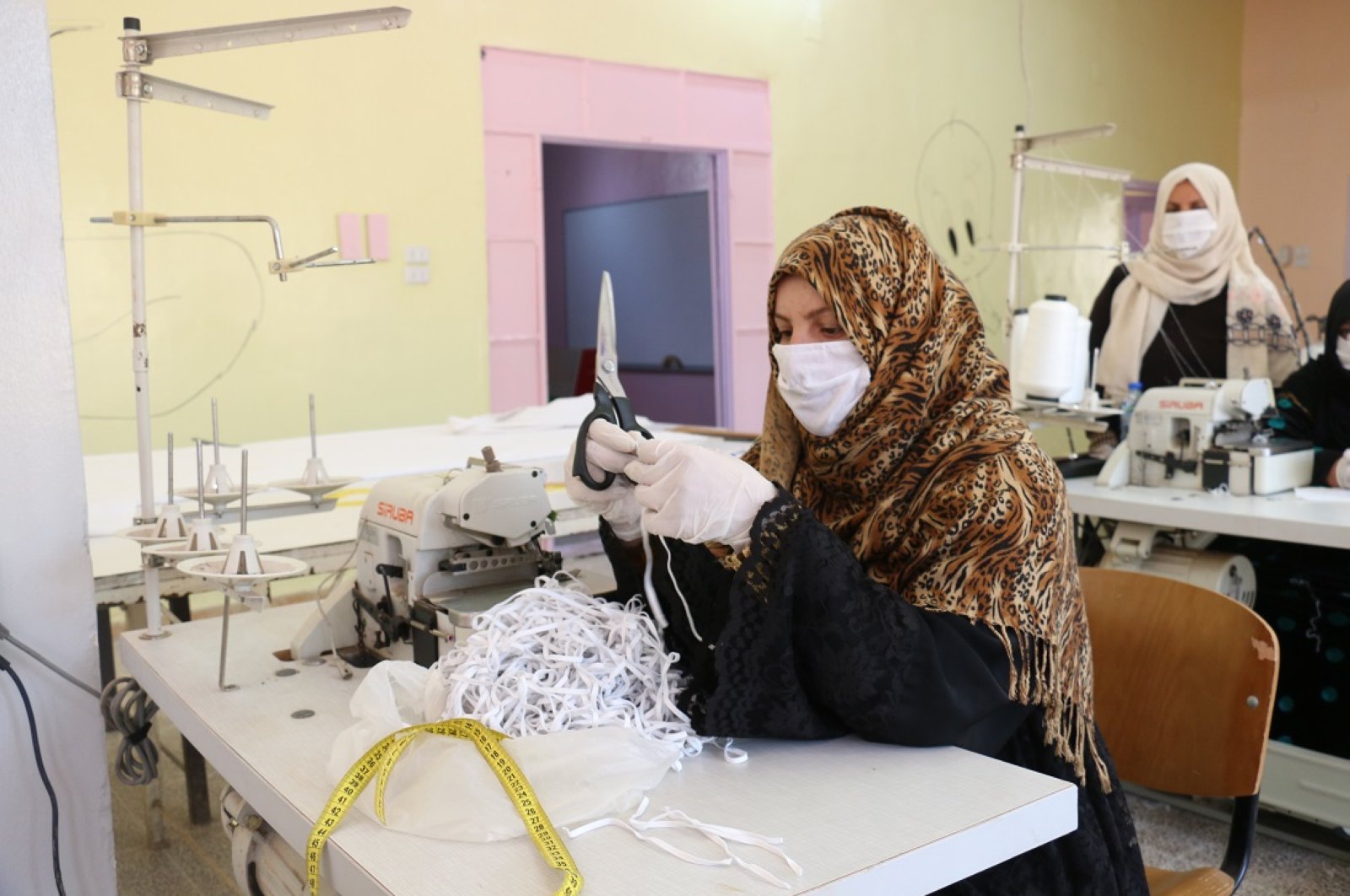 Mask production has been launched in the northeastern Syrian town of Ras al-Ayn under the coordination of southern Turkey’s Şanlıurfa governorship, as part of measures to reduce the spread of the coronavirus.

According to a statement from the governorship on Thursday, disinfection efforts and other measures against the spread of the illness continue to be implemented in the area, which was earlier liberated from terrorist groups as part of Turkey's Operation Peace Spring. The work is to continue under the supervision of the Syria Support and Coordination Center (SUDKOM), a statement from the Şanlıurfa governorship added.

As part of these efforts, a workshop has been established in the town, staffed by local women with the support of the town’s local assembly. The women have had to pass medical checkups, while the workshop itself has been certified to host the highest hygienic standards.

Ras al-Ayn coordinator and District Gov. Erdinç Dolu, who inspected the workplace, stated that they had launched the mask facility in order to also help bring life back to normal in the region as soon as possible.

Stating that there had been no cases yet recorded in the town, Dolu said that measures would still remain at the highest level. According to the district governor, 1,000 masks will be produced by 12 trainee women every day at the workshop.

Access in and out of the town has already been limited, with thermal cameras having been established at its main access points as part of anti-coronavirus measures. While brochures are being provided to the locals with essential information about the outbreak, Peace Spring FM, a radio channel that transmits from Şanlıurfa in Turkish, Kurdish and Arabic, has been raising awareness about the measures that ought to be taken.

On Oct. 9, Turkey launched Operation Peace Spring to eliminate YPG/PKK terrorists from the area east of the Euphrates river in northern Syria to secure Turkey's borders, aid in the safe return of Syrian refugees and ensure Syria's territorial integrity. As part of two separate deals with the United States and Russia, Turkey paused the operation to allow the withdrawal of YPG/PKK terrorists from the planned northern Syria safe zone. Operation Peace Spring put an end to the YPG/PKK's oppression of the residents of the Tal Abyad and Ras al-Ayn regions, thus allowing for the voluntary return of residents who took refuge in Turkey.

Tal Abyad and Ras al-Ayn, together with other liberated areas, have been put back on the road to normalization thanks to reconstruction efforts. Citizens frequently comment that every day is getting better as a result of such works, which have allowed for the restoration of infrastructure, schools and hospitals, while roads and waterworks have also been repaired.

Meanwhile, as northern Syria escalates measures against the coronavirus despite a lack of confirmed cases in the area, Russia's RIA news agency reported Friday that so far the Syrian regime had recorded 19 cases in the rest of the country.

The regime has closed border crossings with Lebanon and Jordan, while Damascus International Airport has been closed to commercial traffic since the arrival of a final flight from Moscow. Regime newspapers have issued their last print editions and will now only be available online.

Despite only a small number of cases declared, it is believed that the virus was likely more widespread than first thought, owing to low testing capacity and lack of transparency.

The Syrian Observatory, a Britain-based war monitor, previously said that doctors had received threats from the regime not to disclose cases. "Doctors have been instructed to refer to cases that are suspected to be corona infections as severe pneumonia," said its director Rami Abdulrahman.

Syria's damaged health infrastructure and massive displacement of citizens as a result of attacks by the Bashar Assad regime and Russia make potential containment measures a nearly impossible task.

The constant onslaught has caused the deterioration of the physical health of civilians across the country, where malnutrition and poverty is now widespread. Refugees are now at further risk due to living in overcrowded camps where conditions are ideal for the spread of the virus. Camps are generally in poor condition with a lack of access to water, hygiene, medical aid and food.