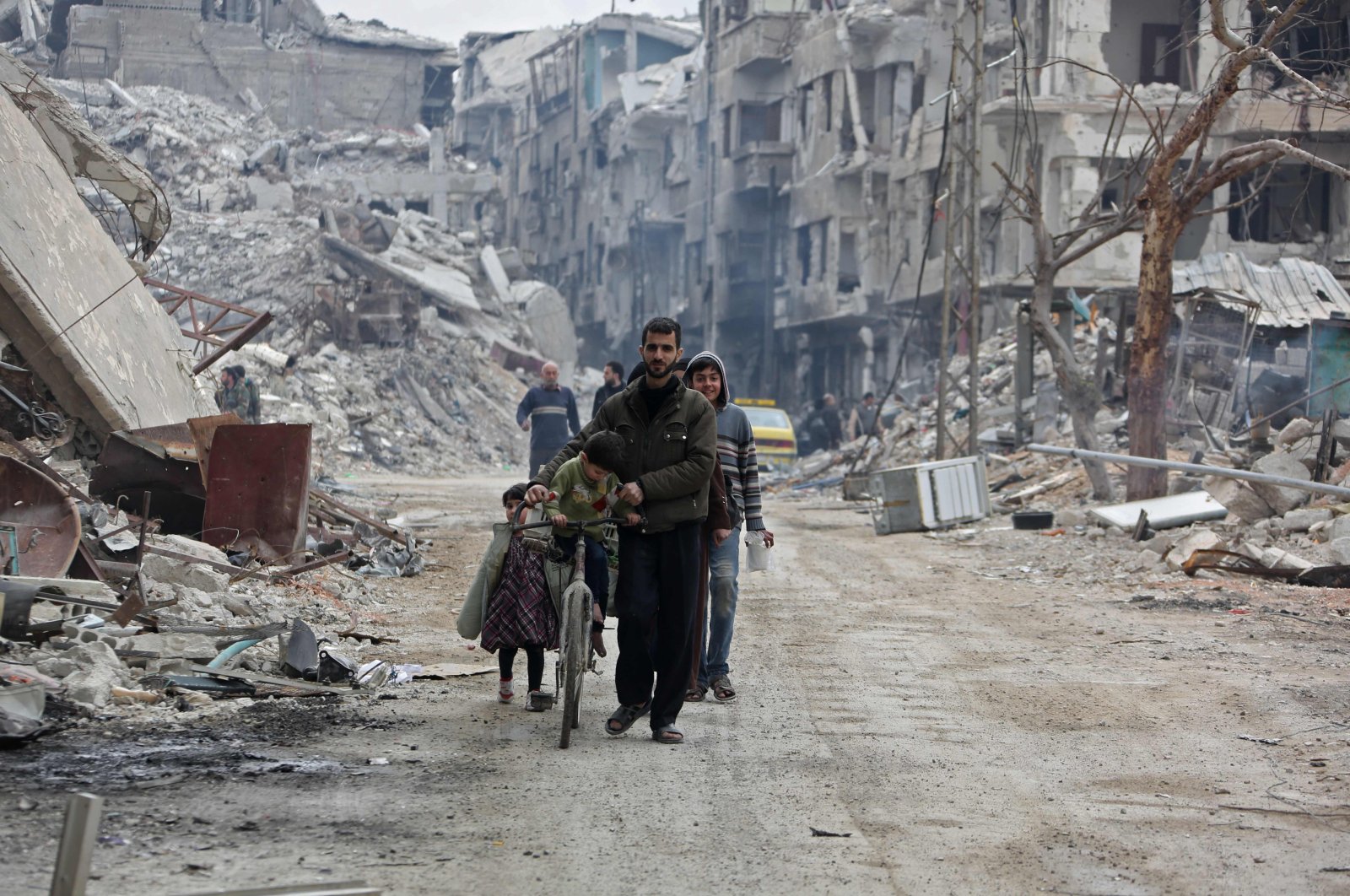 In this file photo taken on March 30, 2018, civilians walk in a destroyed neighborhood in the former opposition-held town of Harasta in eastern Ghouta, a week after regime forces retook the town from the opposition. (AFP Photo)
by Anadolu Agency Mar 16, 2020 8:22 am
Edited By Nurbanu Tanrıkulu Kızıl
RECOMMENDED

As the conflict in Syria entered its 10th year Sunday, France, Germany, the U.K. and the U.S. called on the Syrian regime to end its killings and engage in a political settlement on the basis of a U.N. resolution.

In a joint statement, the four world powers said the Bashar Assad regime must accept the aspirations of its citizens, who demand to live in peace.

The countries demanded the regime "stop the ruthless killing and engage meaningfully in all aspects of UNSCR 2254, including a nationwide cease-fire, a reformed constitution, the release of arbitrarily detained persons, as well as free and fair elections."

They were referring to the Security Council's measure that endorsed a road map for a peace process in the war-torn country.

The statement said Syrian citizens, including those who are displaced and refugees, should be allowed to participate in free and fair elections under U.N. supervision.

The four countries also slammed the "reckless military offensive" by Assad, Russia and Iran in Idlib province in northwest Syria, which they said caused further suffering and an unprecedented humanitarian crisis.

Medical and humanitarian infrastructure and workers, as well as civilians, have been killed during the offensive that started in December, according to multiple reports.

"A nationwide cease-fire must be established," they said.

"We will continue to demand accountability for the atrocities committed by the Assad regime and we will continue our efforts to make sure that those who are responsible for crimes against humanity, war crimes, and other violations and abuses are identified and held accountable," the statement said.

The four countries also urged the international community to continue to provide assistance to Syria's neighbors to share the costs of Syria's refugee crisis.

Syria has been locked in a vicious civil war since early 2011 when the regime cracked down on prodemocratic protests.