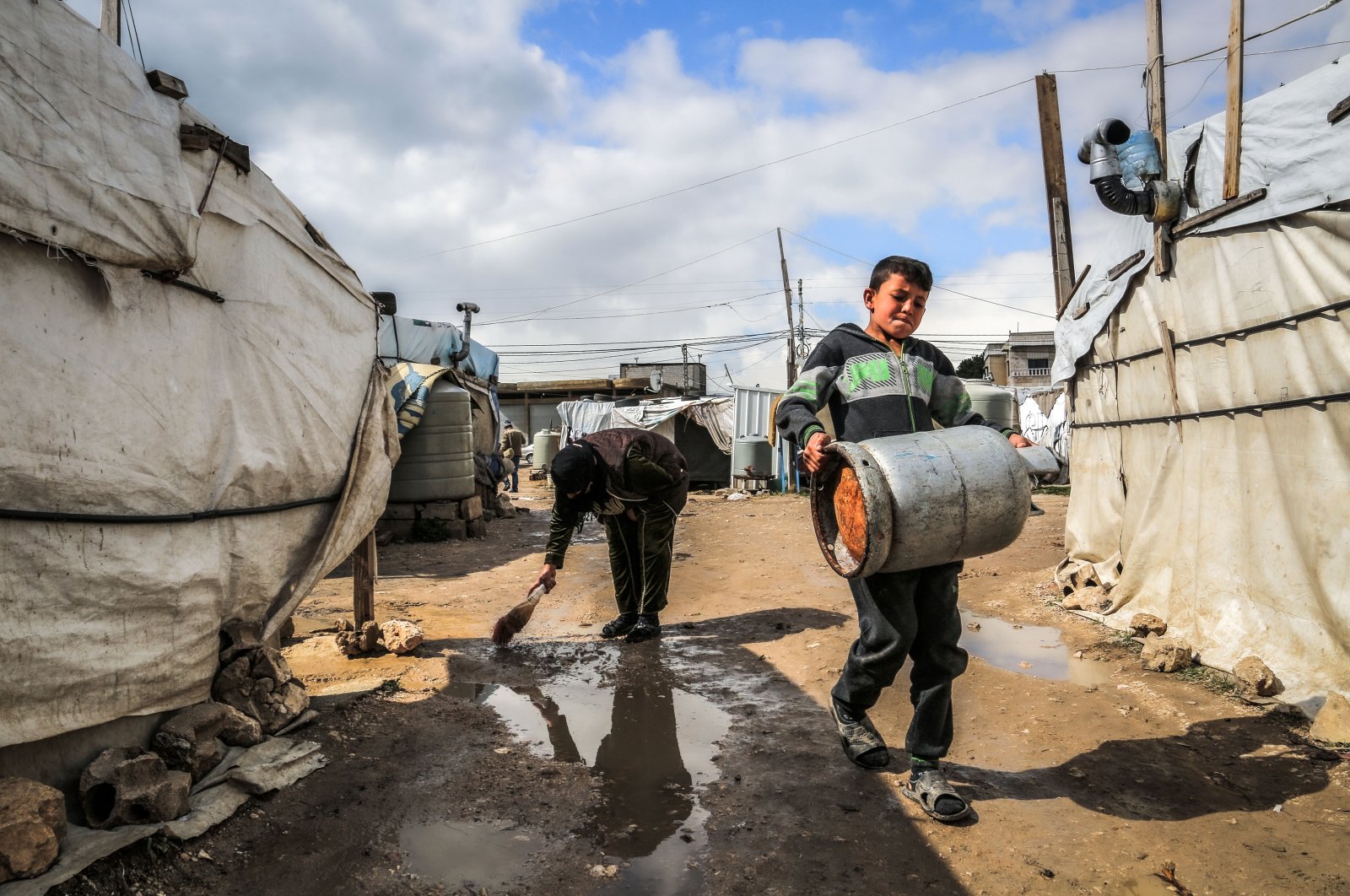 Turkey, for the seventh year in a row, is hosting the largest number of refugees, Turkey's representative to the United Nations High Commissioner for Refugees (UNHCR) said, calling on world leaders to step up efforts for global peace on World Refugees Day

Despite the pandemic and calls for a global cease-fire, the conflict has continued to chase people from their homes as the number of refugees is increasing, UNHCR Turkey representative Philippe Leclerc said, marking World Refugee Day and urging for further efforts.

Speaking to Daily Sabah in an exclusive interview, Leclerc stated: “2020 is the ninth year of uninterrupted rise in forced displacement worldwide. Despite the pandemic, the number of people fleeing wars, violence, persecution and human rights violations in 2020 rose to nearly 82.4 million people.”

According to the UNHCR, girls and boys under the age of 18 account for 42% of all forcibly displaced people. Saying that they are especially vulnerable, Leclerc stated that almost 1 million children were born as refugees between 2018 and 2020.

“Each number represents a real person, a girl or boy, woman or man, whose life has suddenly and through no fault of their own been torn apart. Many of them may remain refugees for years to come. Over the course of 2020, just 251,000 refugees returned to their homes, a 21% drop compared to 2019.”

As conflict rages on around the world, an interesting fact remains that more than two-thirds of all people who fled abroad came from just five countries – Syria, Venezuela, Afghanistan, South Sudan and Myanmar. Leclerc stressed that the majority of refugees are hosted by countries neighboring crisis areas and low and middle-income countries.

“The least developed countries provided asylum to 27% of the total.”

Turkey is hosting almost 4 million refugees, around 3.7 million of which are Syrians. The decadelong conflict continues to displace people as the Bashar Assad regime continues to control Syria's elections and terrorist organizations continue to target civilians.

“Although this refugee crisis may be receiving less media attention, it has not gone away. In fact, the number of Syrian refugees has hardly declined over the past years.”

“Unfortunately, there have been numerous reports of hostilities in various parts of Idlib in early 2021. As humanitarian agencies, we are striving to save lives, but the space for these efforts is shrinking. In the face of such suffering, humanitarian aid alone cannot be the answer,” Leclerc added, saying that refugee situations will exist as long as there are conflicts.

Pointing out that the pandemic and its response has also taken a toll on host countries, Leclerc explained how this has impacted refugees, leading to the need to consider socioeconomic outcomes, as well as health aspects.

“Many of the gains that we have had for all of them, thanks to the leadership of so many governments, in particular in Turkey, where education, health, access to employment is and was guaranteed, all this progress is at stake because of the progress of the pandemic which means emerging needs are akin to a new emergency, and past gains of refugees risk being lost.”

“The pandemic has also taught us that we are stronger when we stand together,” Leclerc stressed. He also reiterated that refugees and displaced people have stepped up, working as doctors and nurses, developing innovative hygiene solutions and keeping their communities functioning.

“We are happy to see that Turkey included refugees and migrants in the vaccination program as well.”

Leclerc indicated that the international community should provide more support to Turkey and other host countries.

“The countries and communities hosting large numbers of refugees, such as Turkey, are in need of additional support and solidarity as they are dealing with 'an emergency on top of an emergency.'”

Leclerc said that the Global Compact on Refugees provides a basis for responsibility sharing in this manner by enhancing refugee self-reliance, supporting conditions in countries of origin for returns and easing pressure on host countries.

He expressed that World Refugee Day is an occasion to appreciate the courage, strength and resilience of the people who had no other choice other than to flee their homes to save their lives.

Leclerc stated that the majority of refugees in Turkey live in the southeast, with substantial populations also living in metropolitan cities such as Istanbul, Bursa, Izmir and Konya.

“Only some 1.6% of this population live in Temporary Accommodation Centres, while the vast majority live across Turkey's 81 provinces, in urban, peri-urban or rural areas.”

Pointing to the importance of social cohesion, he said that this requires government commitment to establish and implement the legislation, policies, resources and expertise to enable refugees to reach their potential.

He stated that UNHCR continues to work together with the Directorate General of Migration Management for harmonization and engages with local administrations and municipalities to strengthen social cohesion between refugee and host communities.

“Promoting self-reliance and resilience of refugees is a key element of harmonisation, made more important and challenging by the pandemic.”

Saying that around half of the Syrian refugees in Turkey are children, Leclerc touched on the importance of education. According to the UNHCR, since 2014, the overall enrollment rates in formal education among Syrian refugee children have gradually increased from about 30% at the start of the 2014-2015 academic year, to more than 64% in 2020-2021.

“While only 3% of refugee youth has access to higher education globally, this rate increases to almost 6% in Turkey amongst Syrian refugees,” he said.

Apart from education, another effective way people can rebuild their lives with dignity and in peace is through the opportunity to work and earn a living, Leclerc added, saying that Turkey enacted several legislative and other initiatives to improve opportunities and provide assistance to refugees and asylum-seekers hosted in the country.

“To date, over 100,000 work permits have been issued to Syrian nationals.”

He reminded that pandemic restrictions caused many to lose their jobs, whether locals or refugees, and that people will need further support.

“On this World Refugee Day, we call on people to include the forcibly displaced in our communities and their lives. This year, we've chosen to focus on health care, education and sport,” Leclerc stated and indicated that the UNHCR is “grateful for the generosity and hospitality of the Turkish people and authorities, the scale of which cannot be accounted for statistically, we would like to reiterate our commitment to supporting Turkey and its institutions.”

Although countries and humanitarian organizations are continuing their efforts to address the issue of refugees, irregular migration remains a challenge.

“For those who cannot return, either because of continued conflict, wars or persecution, resettlement in another country is one alternative. However, resettlement places made available by third countries remain very limited globally,” he stated.

According to the UNHCR, refugee resettlement registered a drastic plunge – just 34,400 refugees were resettled last year, the lowest level in 20 years due to a reduced number of resettlement places and COVID-19.

“Moreover, at the peak of the pandemic in 2020, over 160 countries had closed their borders, with 99 States making no exception for people seeking protection.”

Irregular migration has also been causing countries to adopt illegal methods of pushing refugees back or to fail to allow them entry.

“Many people fleeing conflict and persecution are undertaking dangerous journeys and using smugglers to reach safety. UNHCR is concerned for the safety of those who make the crossing in dangerous waters,” Leclerc underlined. “UNHCR believes that states in Europe and beyond need to intensify their efforts to increase opportunities for those in need of protection to access these legal alternatives to unsafe journeys.”

Leclerc suggested that countries could increase resettlement, establish community-based sponsorship of refugees, provide for humanitarian admission, facilitate family reunification and enhance other visa entry programs such as for health, scholarship or work.