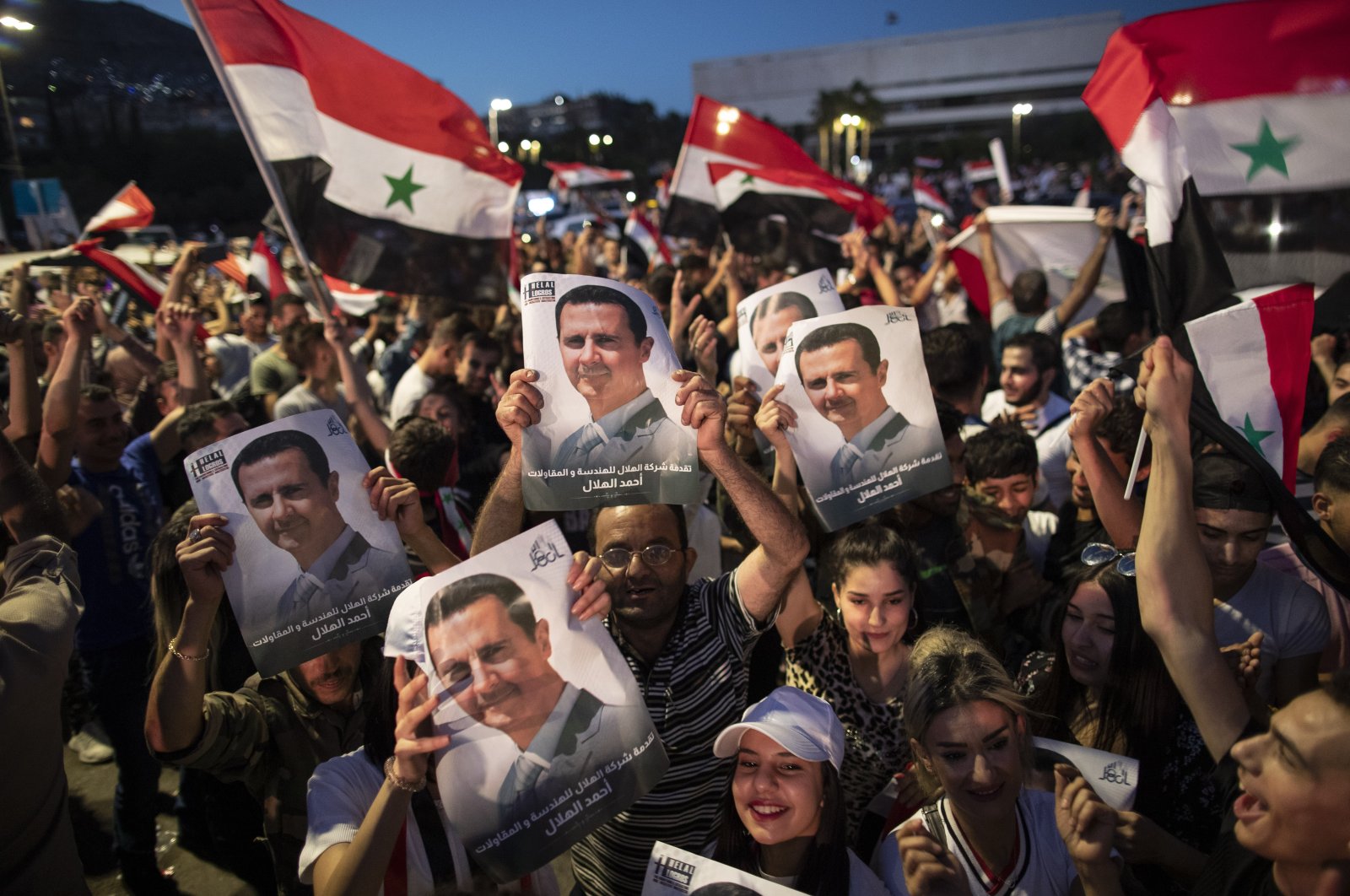 Syrian President Bashar Assad supporters hold up national flags and pictures of Assad as they celebrate at Omayyad Square, in Damascus, Syria, Thursday, May 27, 2021. (AP Photo)
by Daily Sabah with AFP May 27, 2021 11:57 pm
RECOMMENDED

Syria's Bashar Assad won a fourth term in office with 95.1% of votes, head of parliament Hammouda Sabbagh announced in a live conference on Thursday, following an election criticized by the opposition and Western nations. Voter turnout was at 78.66%.

The two other presidential candidates, former state minister Abdallah Salloum Abdallah and Mahmud Merhi, a member of the so-called "tolerated opposition", received 1.5 percent and 3.3 percent of the vote respectively, according to the official results.

On April 18, Syria's parliament set May 26 for presidential elections, which were expected to keep Assad in power in the country devastated by a decade of civil war. The 55-year-old, as widely expected, secured a fourth term in office by a comfortable margin in the May 26 vote, which observers had said repeatedly leading up to it would be far from free and fair.

Assad has succeeded in every election since he assumed power in 2000 as heir to his father, Hafez Assad, by rates exceeding 88%, according to official election results. The previous presidential election was held in 2014 and saw two candidates run against Assad after a constitutional amendment allowing for a multi-candidate ballot. Candidates must also have the backing of at least 35 members of parliament, which is dominated by Assad's Baath Party.

Since the previous election, regime forces have clawed back swathes of territory from the opposition and terrorist elements with military help from regime allies Russia and Iran. But large parts of Syria still escape regime control and polling did not take place in those areas. They include the northwestern province of Idlib, the last opposition bastion. The Idlib region, including nearby districts where other opposition groups are also present, is home to 2.9 million people, of whom two-thirds have fled their homes in other regions ravaged by violence.

Forcibly displaced Syrians who took refuge in northwestern Syria's Idlib denounced the Assad regime's presidential elections as "illegitimate," underlining that it is unacceptable for someone who kills his own people and who has displaced millions to hold polls in the country. The Syrian opposition had also stated that it rejects the presidential elections in the war-torn country and had called on Syrians living under regime-controlled areas to boycott the polls. Hadi Al-Bahra, the co-chair of the Syrian Constitutional Committee, said in January that the Syrian opposition will not recognize any presidential elections organized by the Assad regime.

Voting was allowed only for Syrians living in regime-controlled areas or those who were living abroad and who had registered with the Syrian embassy in their country of residence.

The Turkish Foreign Ministry stated last month that the international community could not accept the Syrian presidential elections as legitimate, underlining that the elections deprive almost 7 million Syrians in the diaspora of suffrage.