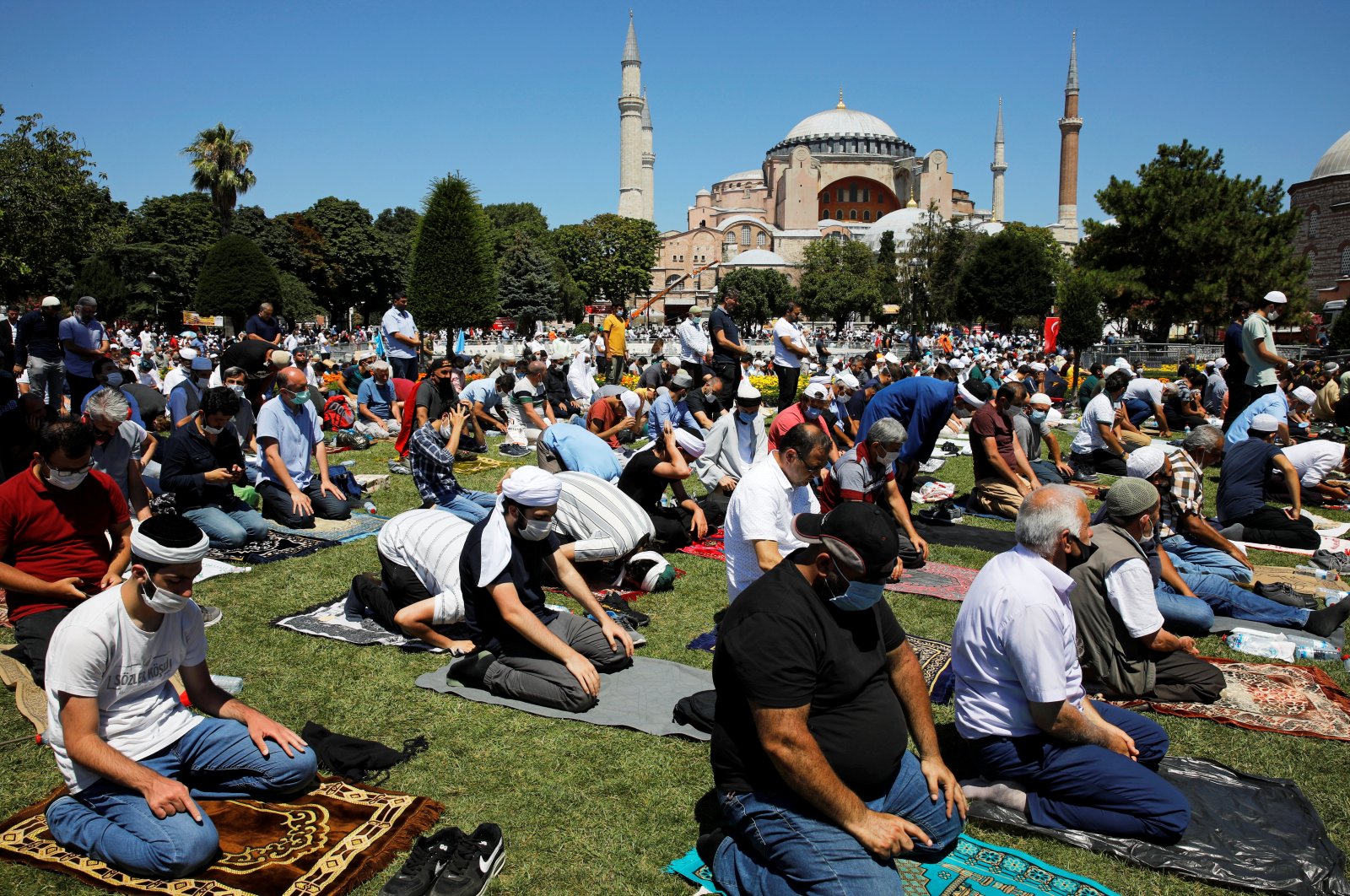 Muslims attend Friday prayers outside Hagia Sophia Grand Mosque for the first time after it was reopened as a mosque after 86 years, Istanbul, Turkey, July 24, 2020. (REUTERS Photo)
by DAILY SABAH WITH AGENCIES Jul 24, 2020 2:22 pm
RECOMMENDED

The world’s attention turned to Hagia Sophia Grand Mosque as thousands gathered Friday for the first prayers since Turkey reverted the former museum to a mosque after 86 years.

Representatives from many foreign countries, particularly from Muslim and Turkic countries, closely followed the Friday prayer at Hagia Sophia.

Visiting media representatives broadcast the event live from the platform prepared for them in Sultanahmet Square near Hagia Sophia.

Social media users from all over the world also shared their messages about the reopening of the historical monument for prayers, sharing related hashtags as a trending topic on Twitter.

The deputy head of the South Africa Awqaf Foundation, Mickael Collier, said Thursday, "July 24 is of great importance for Muslims as the Hagia Sophia Mosque will open to worship after 86 years.”

A congratulatory message came from Algeria for the reopening of Hagia Sophia as a mosque.

Orthodox church leaders in Greece and the U.S., on the other hand, were scheduled to observe “a day of mourning” over the inaugural prayers.

In New York, the Greek Orthodox Archdiocese of America called the inaugural prayers a “cultural and spiritual misappropriation and a violation of all standards of religious harmony and mutual respect.” It called on the faithful to observe a day "of mourning and of manifest grief.”

Archbishop Elpidophoros of America held a meeting with U.S. President Donald Trump and Vice President Mike Pence in Washington on Thursday to discuss concerns over the reversion.

Churches around Greece were in "mourning" Friday as Muslim prayers were to be held at Hagia Sophia in Istanbul for the first time in decades, with protests by religious groups also scheduled.

"What is happening in (Istanbul) this day is not a show of force, but proof of weakness," Greek Prime Minister Kyriakos Mitsotakis said in a statement.

He said the reversion "lacks the power to diminish the radiance of a global heritage monument."

"Especially to us Orthodox Christians, Hagia Sophia today is in our hearts more than ever. It is where our heart beats," Mitsotakis said.

Church bells around the country rang at midday with flags at half-mast to protest what the head of the Church of Greece, Archbishop Ieronymos, has called an "unholy act of defiling" the former Byzantine Empire cathedral.

"(Today) is a day of mourning for all of ... Christianity," Ieronymos said.

The archbishop said he would hold a special service at the Athens metropolis in the evening and chant the Akathist Hymn in honor of the Virgin Mary.

According to Greek tradition, the same service was held in Hagia Sophia on the eve of the Byzantine Empire's fall to the Ottomans in 1453.

Hagia Sophia is "a symbol of our faith and a universal monument of culture," Ieronymos said.

Religious and nationalist groups were also scheduled to hold protests in Athens and Thessaloniki later Friday, while Greece's culture ministry has called it "a provocation to the civilized world."

“Today is a difficult day ... a shadow hangs over us with the transformation of Hagia Sophia into a mosque – something that genuinely shocks Christians all over the world and not only Greeks," Greek government spokesman Stelios Petsas said in an interview with private channel Open TV. "We have warned for some time that this will create an unbridgeable gap between Turkey and the Christian world.”

The history and religious traditions of the predominantly Greek-speaking and Orthodox Christian Byzantine Empire remain influential in Greece.

Ankara has rejected international criticism as a violation of sovereignty and intervention in domestic affairs, assuring that tourists will still be able to visit the mosque and see the mosaics.