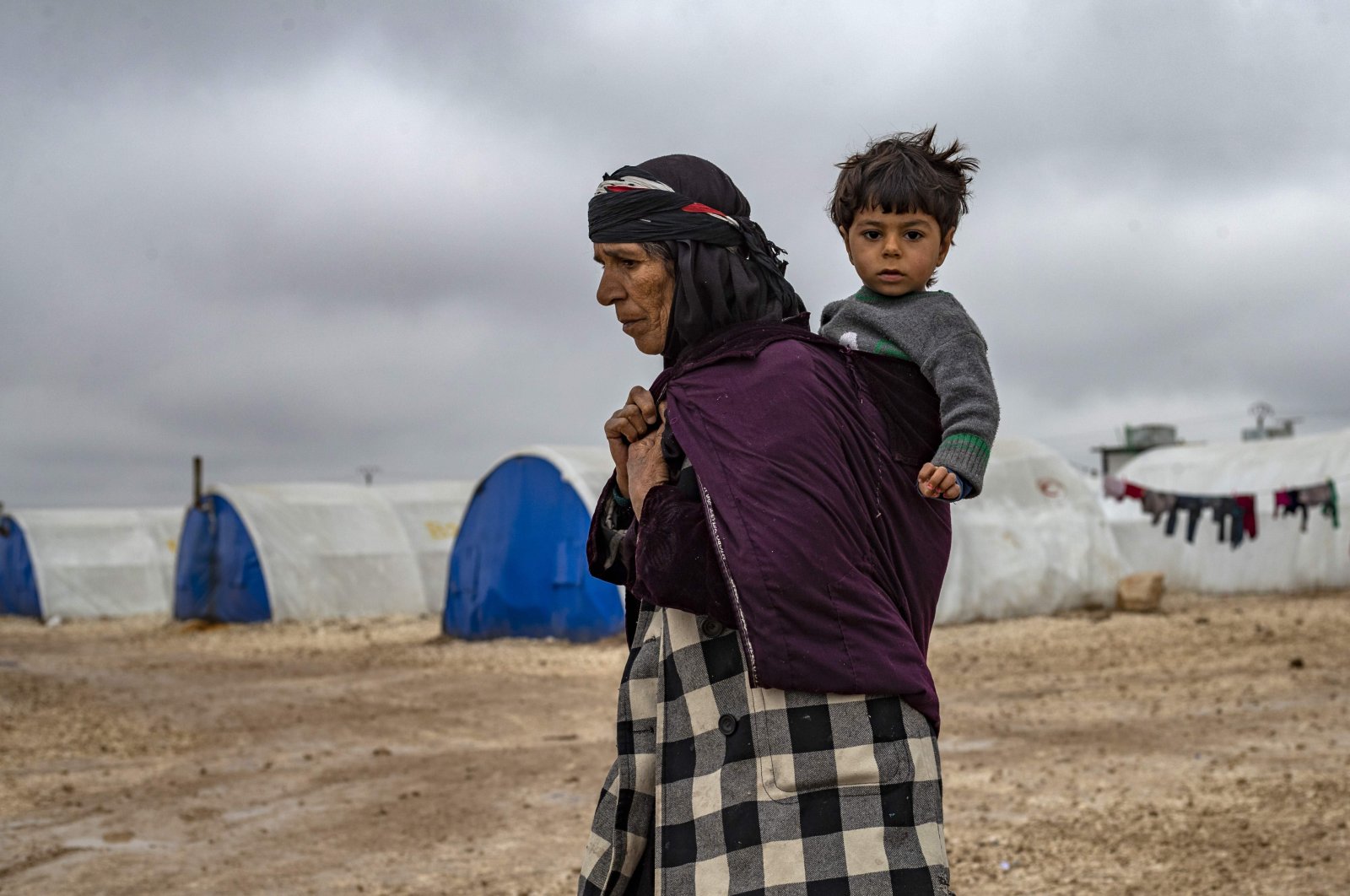 An elderly Syrian woman carries a child in the Washukanni camp for internally displaced people near Hassakeh in northeastern Syria, Feb. 17, 2020. (AFP Photo)
by DAILY SABAH WITH AA Jan 13, 2021 11:27 am
RECOMMENDED

YPG terrorists continue forcibly recruiting young men by separating them from their families in Deir el-Zour and Hassakeh provinces, where a large Arab population resides.

According to local sources speaking to Anadolu Agency (AA), at least one person was injured when the terrorists tried to round up more than a dozen young men in Qamishli city center in Hassakeh.

The terrorists regularly round up hundreds of young men in raids on houses and at checkpoints in the city centers. They also take them to training camps in Hassakeh province.

It has been reported many times that the YPG terror group has been forcibly recruiting children between the ages of 11 and 16, separating minors from their families to fight illegally in the north of Syria and Iraq.

A Trafficking in Persons Report, published by the U.S. in June 2016, says that the YPG recruited and used boys and girls younger than 15 years and took them to training camps.

According to the Rome Statute of the International Criminal Court (ICC), recruiting and using persons under 15 years of age for militant purposes is regarded as a war crime.

Statements by surrendered terrorists also confirm the YPG and PKK’s crimes. Many terrorists that surrendered to Turkish security forces recounted the oppression they faced within the ranks of the group. According to some former terrorists, the PKK ringleaders risk the lives of others to save their own and threaten those planning to surrender with torture.

Last month, Arab residents of Deir el-Zour staged a demonstration against the YPG. Around 500 people gathered in the countryside of the province to protest discrimination against the local population, as well as poor living conditions and rampant corruption in the region. Protesters accused the terror group of depriving local people of basic services such as water and communication.

Deir el-Zour is a major trade link between Iran and Lebanon. Pipelines and trade routes from Iraq and Jordan pass through the province.

Situated on the eastern bank of the Euphrates River, Deir el-Zour is currently under the partial control of the YPG terrorist group.

With the help of militias backed by Russia and Iran, the central and western parts of Deir el-Zour fell to regime forces as Daesh terrorists retreated in November 2017, but they were later taken by the YPG.

Local people living in areas held by the group have long suffered atrocities at the hands of the YPG. The group also systematically and forcefully displaced Arabs from their homes in line with its ethnic policies in traditionally Arab towns.

At least 70 people were killed in five months in Deir el-Zour in unclaimed armed attacks. Following the attacks that targeted the Agedat tribe in early August last year, attacks on civilians have increased, local sources say.

Locals accuse the YPG and its backers, the U.S.-led coalition, of intentionally invoking chaos in the region which has so far resisted the occupation. Attacks and assassination attempts occur almost daily, with regional leaders often the most targeted.

In November, society leaders Muhammed Abdulrazzak Muhammed and Ibrahim Attiye were killed by unidentified assailants in eastern rural Deir el-Zour, while a leader of the Agedat tribe, Sheikh Talyoush Shatat El-Lafi, and his son Mahmoud El-Lafi were found dead in their homes in a village in the eastern outskirts of the province on Jan. 11.