YPG/PKK demands slaughter of 2 million people in Syria's Idlib, claiming all are terrorists 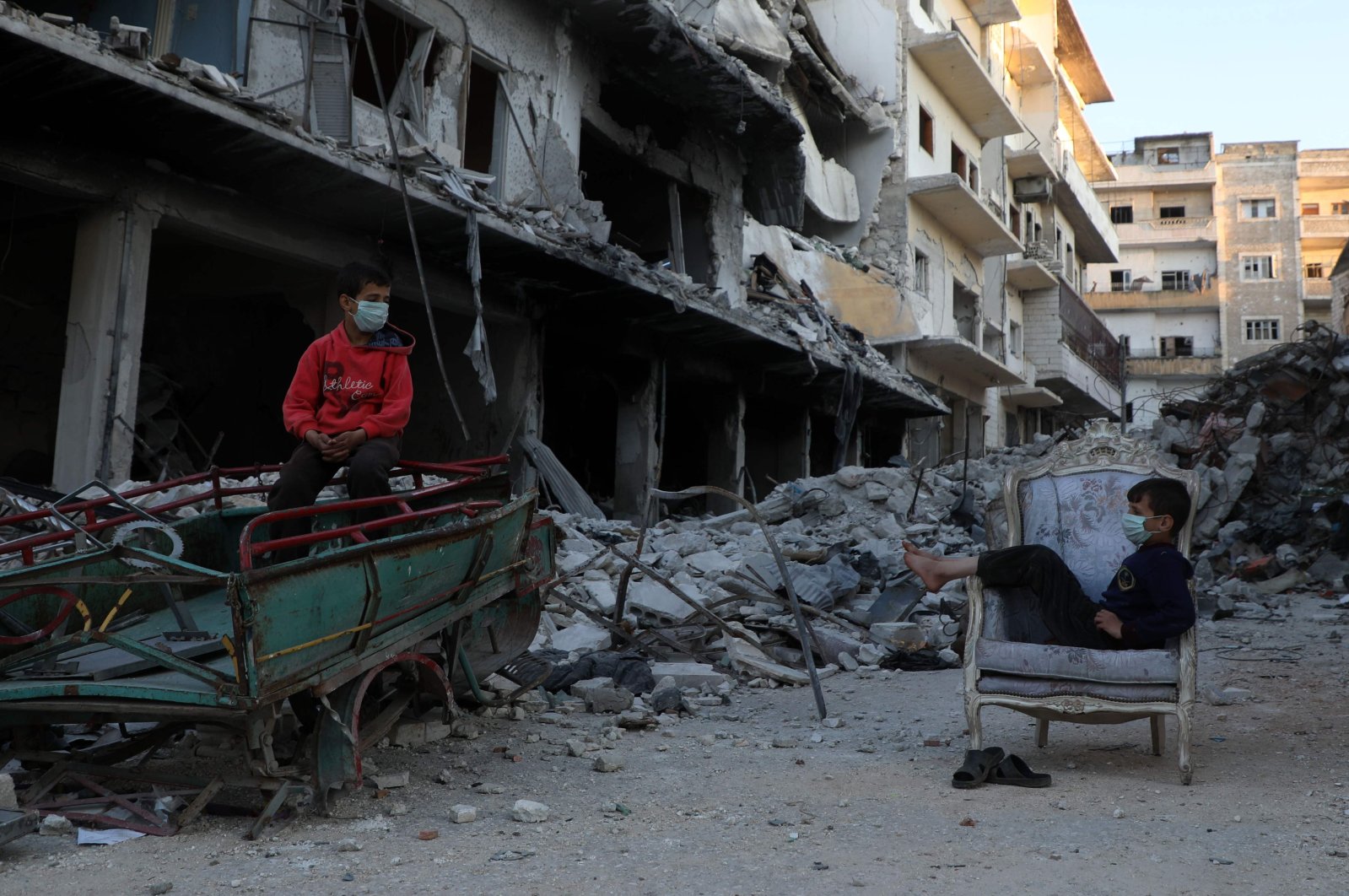 Children sit chatting in a street, ravaged by pro-regime forces airstrikes, in the town of Ariha in the northern countryside of the Idlib province, Saturday, April 11, 2020. (AFP)
by DAILY SABAH WITH AGENCIES Apr 16, 2020 11:43 am
RECOMMENDED

The YPG/PKK terrorist group revealed its brutal nature once again by demanding the killing of all 2 million people in Syria's northwestern province of Idlib, claiming all of them to be "terrorists."

Joining a program on Syria TV, a television channel based in Damascus, via video conference on Tuesday night, one of the so-called press coordinators of the terrorist group, İbrahim İbrahim, suggested that half of Idlib's population deserve to be killed since they are all "terrorists."

"The ones who are in Idlib are terrorists," İbrahim said, accusing the World Health Organization (WHO) of supporting terrorism by providing medical assistance to the war-torn province and the refugees in it.

"Should they be killed?" the presenter asked, only to be answered by İbrahim with a clear-cut answer of "yes."

İbrahim stood behind his claims throughout the rest of the program, in which the main discussion topic was actually the coronavirus.

The Syrian Opposition and the Revolutionary Forces (SMDK) condemned the terrorist's remarks on Wednesday via a written statement.

In the statement, the opposition group stated that İbrahim's words, especially toward the WHO, reveal the YPG/PKK's "sick and separatist mentality." Highlighting the fact that the PKK has been recognized as a terrorist group by both the U.S. and the EU, the communication expressed that the remarks of İbrahim are "in line with the crimes that the PKK's wings in Syria commit against the civilians in the region."

"We condemn the PKK terrorist group and its wings," the statement said, demanding that the terrorist group retreat from the areas that it forcibly confiscated and stop using Syrians as "fuel" during its terrorist activities.

The statement also demanded authorities in Denmark, where İbrahim lives, investigate his remarks.

Fighting has calmed since March when Ankara agreed on a cease-fire with Moscow, which has supported Damascus with heavy airpower, to contain the escalating conflict. The meeting came after regime forces attacked Turkish soldiers and civilians on the ground, prompting Turkey to launch a renewed operation in Syria. The cease-fire deal came amid recent clashes between the Turkish military and Syrian regime forces that left many dead on both sides.

Previously, the U.S-backed terrorist group, the YPG/PKK, signaled possible cooperation with the Syrian regime, the main perpetrator of the devastation in the region.

Speaking to Syria Direct in late March, Aisha Hasso, the co-chair of the PYD, the political wing of the YPG/PKK, stated that they may "join" the Syrian regime and Russia in Idlib if certain conditions are met.

"Any agreement with Russia and Damascus concerning the SDF’s participation in fighting against Turkey and the opposition armed groups in Idlib must be accompanied with an agreement regarding the position of the SDF in the Syrian armed forces ... If the regime agrees to discuss this subject, then the decision to participate in the battles of Idlib would rest on the SDF," said Hasso, referring to the umbrella group dominated by the YPG/PKK. Despite giving the green light for cooperating with the regime and Russia against Turkey, Hasso denied the claims that such collaboration has ever occurred. “Damascus has not been freed from its pre-2011 mentality,” she said.

Still, Hasso's statements on the regime reveal hope for the regime's evolution in a way that would benefit the YPG/PKK. If the regime "accepts the change," she said, there is a high chance it will partner with the YPG/PKK.

This is not the first time the terrorist group has expressed interest in working with the Assad regime. Last year, the two conducted a series of talks with the intention of a partnership, but they ended in failure. The YPG/PKK's move followed U.S. President Donald Trump's announcement of the withdrawal of U.S. troops from Syria, causing the terrorist group to immediately seek alternative allies. During the talks, it was reported that conditions included areas under YPG/PKK control being handed over to the regime forces and the terrorist group being integrated into the regime's army. While the regime stipulated total control over the YPG/PKK militia, however, the terrorist group insisted on having an exclusive division within the army. Also, the PKK affiliate was seeking autonomous control over the areas it currently controls, a request rejected by regime officials.

Hasso's remarks reveal not only the complexity of the relations among the actors involved in the Syrian civil war, but also the miscalculation of the U.S. while choosing its partners in the field. The U.S. has primarily partnered with the YPG/PKK in northeastern Syria in the fight against the Daesh terrorist group. Turkey strongly opposes the YPG/PKK's presence in northern Syria, which has been a major sticking point in strained Turkey-U.S. relations. The U.S. has provided military training and thousands of truckloads of weaponry to the YPG/PKK, despite its NATO ally's security concerns.

Considering that the U.S. has led the coalition formed against the Syrian regime and Daesh and trained the YPG/PKK with the purpose of using the terrorist group against these entities, Hasso's confirmation of a desire to partner with Damascus proves Washington's yearslong efforts were in vain.

The YPG is the Syrian offshoot of the PKK terrorist group, which has been responsible for the deaths of nearly 40,000 people in Turkey, including women and children, over the past 40 years.