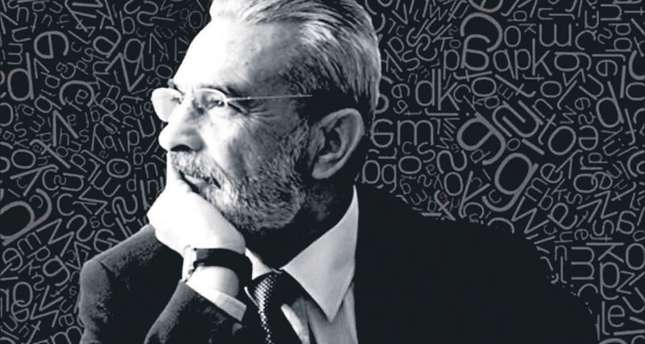 İsmet Özel, born to a poor but literate family in 1944, is a talented and eccentric poet that his also a dissident. The 'anti-conformist' poet has always been at the center of both literary and political agendas with his extraordinary stances

In his autobiographic notes "Waldo Sen Neden Burada Değilsin?" (Why Aren't You Here, Waldo?), İsmet Özel spoke about the fictional quarrel in his mind with dead masters of poetry. According to what he said in the book, he disdained especially the names of some poems like "Hayata Dair" (On Living) of Nazım Hikmet and Carl Sanburg's "Yes, People." Young Özel thought that a poet could not and should not speak "on living" since he himself was alive, and living was sexy. So he decided to write a poem named "Sevgilim Hayat" (Life My Darling). He had similar problems with the name of Carl Sandburg's poem "Yes, People." So Özel wrote another one named "Evet, İsyan" (Yes, Revolt), which is among his masterpieces.

Özel is a very talented eccentric poet who also has been among the most severe dissidents against the established political system both in Turkey and the world. He defines himself as "the enemy" of the world system, which he thinks of as worse than slavery since in the world system "the slaves" are volunteering to be slaves because of the ideological, brainwashing propaganda of the system. This basic way of thinking that Özel calls "anti-conformism" lies beneath every single line or sentence he has written so far. And this makes him a very affecting but hard man to cope with as a poet, a political philosopher and a friend.

İsmet Özel was born on Sept. 19, 1944, in Kayseri where his father, Ahmet Bey, was on duty as a deputy police inspector and his mother, Sıddıka Hanım, was a housewife. The family was from the Söke district of Aydın province in the Aegean region of Turkey. Özel's parents were poor but literate people. Sıddıka Hanım went to elementary school in the Ottoman period, while Ahmet Bey graduated from secondary school, which opened the gate for him to public service.

Özel said that Sıddıka Hanım was a woman full of love but not very religious. The religious one was his father Ahmet Bey. However, he was a policeman, and thus Özel and his siblings did not receive any religious education from their parents. The family showed some interest in religious matters only after religious education was freed by the Democrat Party in 1950. Özel referred to the condition of his father as a public servant in his poetry a couple of times.

Özel was the youngest of six brothers and sisters, all of whom received higher education. Özel said: "Of course my brothers and sisters affected me with their inclinations. My sister Aysel was the closest to me both in age and in feeling too. We had some kind of solidarity between us, and we understood each other I believe." The Özel family moved to Kastamonu from Kayseri where İsmet Özel went to school. He was an ordinary child at school, yet he was reading books, especially literary ones. After elementary school, İsmet moved to Çankırı with his family. His life in Çankırı was a little bit more interesting because he was attending literary sessions held by a teacher and singing Nat King Cole songs with the school jazz orchestra.

Meanwhile, Ahmet Bey retired and the economic situation of the family became worse than ever. They moved to Ankara where İsmet Özel graduated from high school before attending the Political Sciences Faculty of Ankara University. He wrote his first poems in the "waiting" year before college because he couldn't pass the math exam as scheduled. In his waiting year, he also read the Turkish translation of the Quran. "The result," once he referred to that experience, "was a complete frustration since I had no clue about religious and philosophical matters. I had no knowledge about what it all was about."

Özel was both politically and literarily active at the university. He wrote and published poems, while he was working for the Labor Party of Turkey (TİP), which represented the far left in the 1960s. Like many of his peers, Özel was also a socialist and communist at that time. He was the TİP district secretary of Çamlıdere.

However, his main commitment was to poetry. In his early poetry, he followed the İkinci Yeni (Second New) movement's path. He wrote imagist poems that received early attention from master poets and critics. After a few years, the young poet was well known around poetry circles.
Özel published literary and political journals with friends. Of these journals "Evrim2" (Evolution), "Devinim LX" (Movement '60) and "Halkın Dostları" (Friends of the People) represented the 1960s generation in Turkish poetry.

In the second half of the 1960s, though he continued writing and taking duties as a socialist, Özel was in a philosophical depression. He was questioning such matters as existence, the universe and nihilism. His early poetry is full of such traces.

In 1966, Özel left school and thus had to join the army to fulfill his public duty. Özel mentioned the years he was serving in the army as a passage to really learn his country and people. Like many other urban socialists of those days, he did not have much information about these before. He saw the east of Turkey for the first time when he was a soldier. After two years of military service, Özel attended the French language department at Hacettepe University in Ankara. He published the journal Friends of People, which offered a political understanding of arts and literature.

After one year, he quit this journal as well. 'The heart, it hurts as you change your clothes' Now he was completely alone. He wasn't seeing his old friends. He had enough time to ruminate on existential issues that had been a problem for him. His transformation from being a socialist to a Muslim thus began. He began practicing Muslim worship. Though he has asserted that changing his way of life and thinking did not change his poetry, his poems dating from the 1970s reflect this huge change. As an eventual consequence of this change he published "Amentü" (I Belive) in the Diriliş (Resurrection) journal of Sezai Karakoç, who was known as the only Islamist among the modernist poetry environment.

In 1976, Özel married Necla Aslandoğdu, who he knew from the language department at Hacettepe University, and had four children, two sons and two daughters. He wrote columns and essays in the Islamist newspapers, including Yeni Devir, Milli Gazete and Yeni Şafak from 1977 until 2003. He continued writing political poetry that affected even people who did not share his political thoughts.

As for Özel's prose, his attention focuses on several subjects such as the existence of humans on earth, being a Muslim within a modern context, an individual's dilemma of his nature against the destructive structures of modern civilization, the Islamic struggle against the world system and its extensions in Turkey. In "Üç Mesele: Teknik Medeniyet Yabancılaşma" (Three Questions: Technique, Civilization and Alienation), he deeply criticizes Westernization to its ethical roots. Özel argues that Islamists in Turkey have always talked about embracing the techniqueof the West while leaving its ethics on the ground, and that it has been nonsense since technique has its own ethical roots.

An anti-modernism, anti-conformism and anti-West attitude is apparent in everything Özel has written so far. He does not offer an alternative Islamic system or utopia. Rather he focuses on the uniqueness of the Muslim individual as a human being. His best trial is to remove the inferiority complex of Muslims because of the acceptance of the historical defeat by the West. Özel himself has great self-esteem as a Muslim and thinks that Islam cannot be defeated completely since it's impossible for the world system to beat every Muslim individual. So he offers to protect and preserve what the West wants Muslims to leave aside. His last move to defend "Turkishness," which seems a little bit bizarre to some people, is a logical consequence of that protective and conservative attitude toward the West.