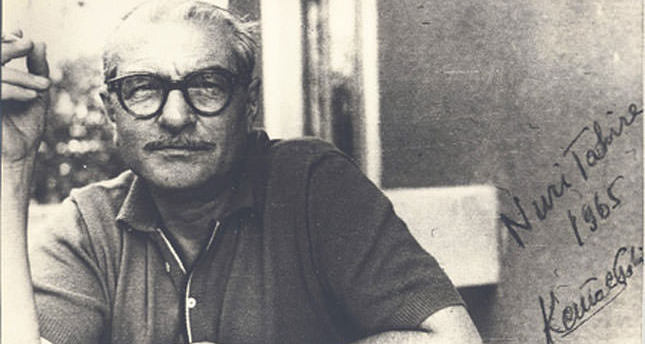 by Hakan Arslanbenzer Oct 18, 2014 12:00 am
Writing about historical truth via fiction has been a hard task for modern writers since Sir Walter Scott created the genre. Should fiction writers stay loyal to history all the time? To what extent should an author add his or her own imagination to the old well-known facts? Should the author put genuine historical characters into an imaginary series of events or use the real historical plot in order to gain attention for the fictional characters? And what's the point in writing historical fiction? Is it for praising history by the way of good writing or does a novelist want to make readers believe in the story by utilizing the unchangeable passage of historical events?

There is a saying in Turkish, "The horse is the rider's, the sword is the carrier's," which means hard tasks require hard men to accomplish them. Kemal Tahir was that hard type of man who endeavored to achieve challenging tasks. Though his life was not easy because of that - he first had to take care of his family after his father died, second he was in prison for many years and third he was a spotted adversary and ex-convict after his years in prison - he gave his best to write about the historical and actual condition of Turkey and its people. He once put his goal in writing with a single phrase: "To tell the drama of a man who finds himself in trouble within a context of events."

Kemal Tahir is the penname of İsmail Kemalettin Demir. He was born on April 15, 1910, to parents who had both been in the service of Sultan Abdülhamid II and his royal family. Kemal Tahir's father, Captain Tahir Bey, was one of the aides of the sultan, while his wife, Nuriye Hanım, was one of the ladies-in-waiting for Naile Sultan, the daughter of the sultan. Kemal Tahir seems to have been born into a courtly family - however this was just after the reigning years of the sultan. Abdülhamid II was overthrown by the Young Turks in 1909.

Abdülhamid's fall had a great impact on Kemal Tahir's family. Tahir Bey was discharged by the new government because he had been close to the overthrown sultan. Kemal Tahir's childhood passed in various places in the Ottoman Empire because of his parents' jobs. In his novel, "Bir Mülkiyet Kalesi" (A Castle of Property), which could only be published posthumously, Tahir called his father Mahir Bey, an aide to Sultan Abdülhamid II. In the novel, Mahir Bey struggles for both his country and his home. His son Murat Bey, who is the shadow of Kemal Tahir in the novel, on the other hand, is a communist. Mahir Bey represents the past, while his son is the future.

We don't know why Tahir did not publish this work in his lifetime. Novelist Selim İleri wrote in a newspaper column that Tahir might have been annoyed with the reaction he would face after such a publication since he did not depict Abdülhamid II as accepted in popular opinion in the 1960s. Leftists especially called Abdülhamid II "the Red Sultan," as British intelligence used in propaganda against the sultan during and after his reign - and Tahir was a leftist himself.

Tahir Bey and his family settled in Istanbul in 1923. Kemal attended the Sultani (now Galatasaray High School). Unfortunately, his mother died from tuberculosis in 1926. He left school in the 10th grade since his father married another woman. Tahir said: "Alone is alone. If you're alone, you will be alone even in the middle of a battle field." To be alone was like destiny for him.

Tahir was now completely on his own. He worked as an assistant to a lawyer before he left Istanbul to be a store clerk in the Zonguldak coal management office. In 1930, he returned to Istanbul and began to work for the press. He was conducting interviews, translating and editing texts for daily Istanbul papers such as Vakit, Haber and Son Posta. After a while he worked as a writer and editor for other papers and comic journals like Yedigün, Karikatür and Karagöz.

1938 is a milestone in the history of the Turkish left. In that year, the government began to pressure leftists. The so-called Navy Case (Bahriye Davası) cost some leftist writers like Hikmet Kıvılcımlı, Nazım Hikmet and Kemal Tahir their freedom. They were accused by the Military Court of stirring up Navy personnel for a rebellion. Tahir was sentenced to 15 years, and his brother Nuri Demir, who was a Navy officer at that time, was sentenced as well. The only thing the court used as proof against Tahir was that he gave a book by Sabahattin Ali, another leftist fiction writer, to his brother.

The 1938 Navy Case was not a proper one in either a technical sense or concerning justice of any kind. The regime was afraid of Russian communism, and so it felt comfortable in catching and imprisoning far leftists. Yet, Tahir was no far leftist. He was a populist and Kemalist in general. He lived a fast life with women, and he had to write much faster in order to earn his living. He was not a member of nor had a link to the Turkish Communist Party. He only had links to some communist friends, such as Kerim Sadi and Nazım Hikmet, who were famous Bolsheviks.

Tahir spent 12 years in prisons in Çankırı, Çorum, Kırşehir and Malatya from which he collected stories of rural people and criminals, which he used in his stories and novels later. The writer was released from prison in 1950 by a discharge amendment from the newly elected Democrat Party cabinet.