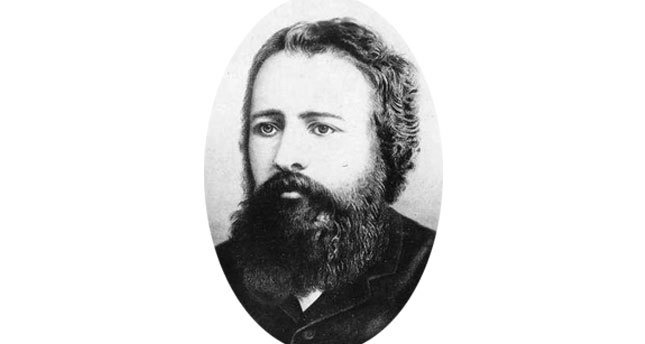 Namık Kemal was born on Dec. 21, 1840, in his maternal grandfather's Tekirdağ mansion. His actual name is Mehmed Kemal. ("Namık" is a pseudonym given to him by Eşref Pasha, one of the poets of the time, to be used in some of his poems). Mehmed Kemal would go by the pen name "Namık" in some poems, and Kemal in others. Namık Kemal is the forerunner and intellectual father of the Kemals in our literature. "Kemal" means grandeur, maturity, wholeness or completeness. His family numbers among the seyfiyye (military) and kalemiyye (civil bureaucrat) classes. His father, Mustafa Asım Bey, was the chief astrologer of Sultan Abdulhamid II. Eminent figures that occupied significant positions such as a grand vizier, a navy admiral and a chamberlain were among his ancestors.

After his mother Fatma Zehra Hanım passed away when Namık Kemal was eight, he spent the rest of his childhood and his early youth with his pasha grandfather. These years influenced him deeply. Apparently, Abdüllatif Pasha did his best to raise his orphaned grandson well and made sure he received an exclusive education on a variety of topics. What is striking about this education is that while Namık Kemal learned poetry and Persian alongside Sufism, he also took riding, jereed and hunting lessons while in Kars. On a related point, we can argue that Namık Kemal had a liberal temperament or that he was raised in liberty. What complements this liberty is heroism, the two inseparable aspects of the notion of freedom he would later put forward in his works. Namık Kemal's concept of freedom does not quite reflect the liberalism of Western sources; it is a perception of freedom that is redeeming and involves independence and power, as well. It is based not on economics, but on faith and vigor.

A new character in poetry

Namık Kemal, who took up poetry in Kars with the encouragement of his teacher, composed poems on the valley of classical poetry for about nine-10 years. It is indisputable that these poems do not hold any special meaning - even his later works, by the way, are not of very high quality when viewed aesthetically. What makes Namık Kemal a poet is not finesse and taste, in any case. It is reason and faith; the many words he uses in his idiosyncratic poems, and especially the determination and strength with which he can charge his phrases, strength driven by something substantial, not by abstractionism. After his early years, Namık Kemal, partly owing to the fact that he belonged to a family of state officials, established contacts with the distinguished poets of the period.

The major influence that shaped Namık Kemal's character is that of Şinasi. Şinasi is a writer who produced few works, but generated a brand new idea and attempted to undertake some sort of intellectual freedom and absolute Westernization. Like other Ottomans, Şinasi, too, wished for the salvation of the state and sought to realize it through his ideas; but his way of seeking did not take the form of advising or warning heads of state, but of raising awareness among the masses and ensuring the free dissemination of his own ideas - namely, publishing a newspaper. This is how "Tasvir-i Efkar" (Depiction of Ideas) emerged. With Namık Kemal joining the newspaper, Turkey would obtain its first local journal dealing with ideas.

The influence of Şinasi awakened Namık Kemal. He became aware of the fact that the only way to stop the homeland slipping away was to adopt a solid realism. That is, a realism with components such as simplicity, clarity, intentionality or purposefulness, which is an amalgamation of knowledge and wisdom and desire and faith, and the consideration of prose and poetry as the means towards the end. By virtue of his education and personality, Namık Kemal is a poet who is close to both the known and the concealed. He has a genuine affinity for disciplines such as Sufism, philosophy, and history. In this sense, the fact that Şinasi diverted Namık Kemal's gaze from the skies back down on earth was a huge gain for Turkish thought and literature.

A new character in politics

Apart from poetry gatherings, we encounter Namık Kemal in the Young Ottomans Society established in 1865, one of the most intriguing political and intellectual organizations formed in Turkey. The Young Ottomans are a society that appear old-style for maintaining the Koçi Bey tradition, namely that of warning the head of the state - the Sultan - on the perpetuity of the state; but are brand new in another sense - for emerging as intellectual bureaucrats organized in a much more depersonalized manner. It is no surprise that Namık Kemal was one of the most influential and brightest members of this society. His easy-going personality, his recklessness in instantly executing what he believed in, and exquisite distinction were enough to make Namık Kemal stand out. But the actual question was what Namık Kemal would make of it.

When the Young Ottoman movement faced the injustice of Ali and Fuat pashas (cursed by all our thinkers, but politically defended by some of our historians - the most important rulers of the period on whom we have not yet come to a decision as a nation), Namık Kemal and his companion Ziya Bey had no choice but to go into voluntary European exile with the help of the French and under the financial and diplomatic auspices of the Egyptian Prince Mustafa Fazl Pasha. In terms of an enhancement in thought and attitude, Namık Kemal must be deemed the "Young Ottoman" or "Young Turk" who benefitted the most from European exile.

When the government granted clemency, Namık Kemal was able to return home. He was 30 years old, and his determination was not diminished. He had gone through a profound intellectual and literary maturation. Namık Kemal's most significant period is the 18-year period between his return from the European exile and passing away. What remains from this period of 18 years is his political and literary articles and anecdotes written for the newspaper "İbret" (Lesson)published by himself and the theater play "Vatan yahut Silistre" (The Homeland or Silistra), which was the number one influence in the popularization of his ideas and led to his arrest and exile, having just been performed on stage. Other plays remain too; those he generally attributed special attention to and believed would be beneficial for the moral upbringing of the public; his novels and poems with a homeland theme that are accepted as the first influential yet raw examples of modern Turkish poetry and are based on reality rather than fiction, thought rather than pleasure, purpose rather than style; historical works produced especially during his exile years and letters addressing young writers who showed great interest in him.

His influence was extensive, his fame kept increasing, the concepts of homeland, nation and freedom, for which he lay down his life - even though these idea were not quite understood in content - became the creed of numerous people, especially the young; and thus, he transformed into a dangerous figure in the eyes of state dignitaries, and after being sent into one exile after another, he passed away on the second day of the month of December in the year 1888.