Sheikh Hamdullah: Founder of the Ottoman school of calligraphy 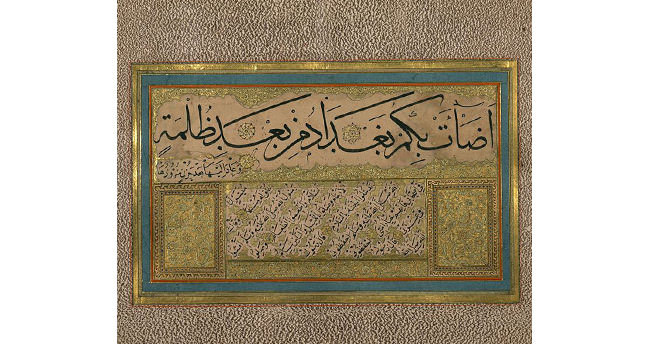 Sheikh Hamdullah (1436-1520) was the founder of the Ottoman school of Islamic calligraphy. After Yakut of Baghdad, Hamdullah refined the six standard scripts, and was held in high esteem for his writing in the naskh and thuluth scripts

Although he was born in Amasya, Yaqut was captured by slave traders at an early age and was brought to Baghdad where he was sold to the Abbasid Khalif al-Musta'sim. Receiving exceptional education at the court of al-Musta'sim,Yaqut apprenticed alongside the composer Safi al-Din al-Urmawi. The art of calligraphy was learned through meşk, meaning continuous repetition and practice. Once he reached a certain level, Yaqut practiced the styles of Ibn Muqla and Ibnal-Bawwab, the previous masters of calligraphy, and then finally developed his own style in six types of calligraphy called aklam-ı sitte, or six pens. He scripted especially the Muhaqqaq and Reyhani styles very beautifully. In order for the Tuluth and Naskh, two of the other brilliant styles of the aklam-ı sitte, to reach their peak, the birth of the Ottoman school had yet to arise.

The Shahzade and the calligrapher

We do not know for sure when Sheikh Hamdullah was born. Various dates have been given between 1426 and 1436.Hamdullah belonged to a renowned family of Amasya(Sarıkadızade). Rumors have it that his father or his grandfather migrated from Bukhara to Amasya. The Sarıkadızades were a family of scholars and wise men. Thus their children received decent education.

Sheikh Hamdullah received his confirmation as a calligrapher from Hayreddin Maraşi and his authorization as the master of the tekke from his father Mustafa Dede. The encounter that would change his life, however, took place at one of his father's gatherings. While attending his father's discussion sessions, he met Bayezid II, who was the governor of Amasya at the time and waiting for his succession to the throne. As the Sheikh studied Qur'anic disciplines and literature with the highly devout and knowledgeable Shahzade, he was appointed the calligraphy instructor to the Shahzade at the same time. Meanwhile, he reproduced certain works in beautiful script for Mehmed II's ("the Conqueror") private library. The beauty of Hamdullah's writing was discovered while he was still in Amasya.

He had an amicable companionship with Bayezid II. While Bayezid was waiting for enthronement and executing the duty of the governor of Amasya, he always kept close ties with Hamdullah, and even served the master by holding his calligraphy pot with his own hands. During invitations, the Shahzade would sit the calligrapher closest to him and set him apart from the other guests.

Hamdullah married the daughter of Cemaleddin Amasi, who was his uncle and fellow calligrapher. The couple had a son and a daughter. The son Mustafa, just like his father, became a calligrapher.

Apart from being an artist, Hamdullah was also a sportsman. He was a well-known archer and it is rumored that he broke a fellow archer's arrow from a distance of 1100 paces (approximately 730 meters). To mark the incident, a stone was erected in Okmeydanı, on which the words "furthest distance achieved by Hamdullah son of sheikh, chief calligrapher and the sheikh of archers" are inscribed. Due to his skill in archery, Bayezid II appointed Sheikh Hamdullah the sheikh of Okçular Tekkesi ("Tekke of Archers"). In addition to archery, Hamdullah was also skilled in swimming and tailoring.

For the Ottomans, all roads led to Istanbul

After Bayezid II succeeded the throne following his father Mehmed II, he had his instructor and friend Sheikh Hamdullah brought to Istanbul. The Sheikh was appointed writing instructor to court scribes and servants. At the same time, a working place and lodging in which he could conveniently reside and work were arranged in both the Istanbul and Edirne courts, and the revenues of two villages in Üsküdar were endowed upon him.

Still, it is striking that Hamdullah had adopted the attitude of a dervish in the middle of all this splendor. Calligraphers, for the most part, have the attitudes of a dervish, anyway. Whether this is because they are laborers of the Quran, or because of the magic of the letters, or both, only Allah knows. All in all, what Sheikh Hamdullah received from the Ottomans, he returned a hundred-fold. With advice from his friend Sultan Bayezid II, he scrutinized the Abbasid style and conceived the Ottoman one. He did this particularly by making the Naskhstyle the centerpiece - the centerpiece meaning the scripture of the Quran. From the time of Sheikh Hamdullah until printing was invented, the Quran was mostly copied in Naskhcalligraphy, with the occasional Tuluth.

Hamdullah's way of writing is referred to as the Sheikh Style, and it is certain that it grew out of differentiation from the Yaqutid Style. According to the narrative by the 18th-century biographer Mustakimzade, Bayezid had Sheikh Hamdullah summoned, and said to him "You have avoided laying eyes on the calligraphy of Yaqut al-Musta'simi," and showed him some of the examples of such calligraphy he carried with him and asked him to create a new style. The slight exaggeration of this rumor does not slip through the cracks, for it appears that there are two different periods in the Sheikh's scripture. The Amasya period, during which he was under the influence of Yaqut, and the Istanbul period, when he shone with his own style. So, the issue of "avoidance" seems to be a mise-en-scène Mustakimzade came up with based on the companionship between the Sultan and the calligrapher.

What follows for the Sheikh is a compelling phase of hard work. According to Mustakimzade, Sheikh Hamdullah had, with utmost care, studied the styles of the great old masters, primarily of Yaqut, for a long period of time. He, first of all structured in his mind the classical proportion of scripture in the aesthetics of writing that they failed to accomplish, its most beautiful stance and the harmony of the lines. However, he struggled to put on paper the beautiful shapes and harmony that was engraved on his mind. This agony of creation lasted for days and finally, he achieved the writing style of his dreams by pouring it out onto paper, almost like a miraculous gift from Allah.

After the emergence of the new style, the Sheikh was to experience a fertile period. The Sheikh's style, in comparison to that of his predecessor, Yaqut, is more spacious and pure. The complexity and gravity of the Qurans written in the Yaqutid style were resolved by opting merely for a clean Naskh calligraphy in the Sheikh Style, and the light and effluent style of Mushaf was born. Excluding the subsequent Ahmed Karahisari, the Yaqutid style was more or less abandoned in Quranic calligraphy, and the style of the Sheikh came to be favored throughout the entire Muslim world.

Sheik Hamdullah, who retreated into seclusion during the time of Yavuz after Bayezid II, passed away the year Süleyman I ("the Lawgiver") ascended the throne. It is rumored that Suleiman asked the Sheikh to reproduce a Mushaf for him, and that in response, the Sheikh, citing his old age, recommended instead Muhyiddin Amasi, one of the younger calligraphers, and that in response, Suleiman gifted the Sheikh sable fur and asked for his blessings.

It has been established that there are 47 Mushafs and rolls, stanzas, muraqqa plates, fascicles of the Al-An'am chapter as well as the Al-Kahf and An-Naba suras of the Quran, and around a thousand examples of calligraphies in the invocation and dhikr kinds produced by the Sheikh. A significant quantity of these is preserved in Turkey's various museums and libraries.