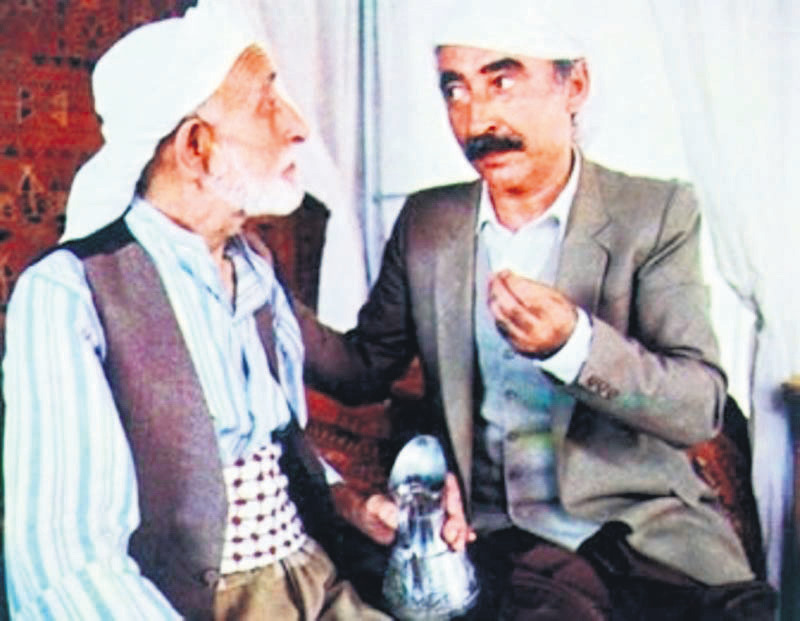 Born in 1955 in Manisa, western Turkey, Nesli Çölgeçen is a director and scriptwriter for cinema. He is widely known for "Züğürt Ağa" (A Penniless Agha), a brutal satire portraying the feudal social structure in the southeastern region of Turkey.

Nesli Çölgeçen graduated from Ankara University School of Journalism in 1976, and has been in the filmmaking business since 1979, when he made his first film "Tahtacı Fatma," which was a short documentary, as an assistant director. In 1983, Çölgeçen wrote and directed his first long film, "Kardeşim Benim" (O Brother), a romantic drama that won two prizes at the Antalya Film Festival the following year.

However, Nesli Çölgeçen's best works are deemed to be the films he made with Şener Şen as the leading actor. In 1985, the two made "Züğürt Ağa," and in 1987, they filmed a similar satire, "Selamsız Bandosu" (Selamsız Band).

"Züğürt Ağa" is a double-layered narrative, including a satirical description of the social situation in the southeastern Turkey, and the story of an "agha" (landlord) who becomes a penniless worker in the big city. Written by Yavuz Turgul and directed by Nesli Çölgeçen, "Züğürt Ağa" has since become a social phenomenon. When you talk about a man who has great reputation and no money at all, you simply call him a "züğürt ağa" in Turkish.

Nesli Çölgeçen filmed "Selamsız Bandosu" in 1987, which was another hit. However, his later works were less popular with both the public and critics. His latest film, "Çalsın Sazlar" (Let the Lutes Play) was harshly criticized, and Çölgeçen is accused of not keeping up with the times.

A Turkish fiction writer and filmmaker, Safa Önal, has broken an interesting record accepted by the Guinness World Records. Önal has written 395 different movie scripts over 40 years from 1966 until 2005. Being still in business despite his age, Safa Önal has had links with the film industry since the early 1950s. In 1953, Orhan M. Arıburnu made a long film based on "Kanlı Para" (Bloody Money), a novel by Safa Önal, then just 22 years old. Beginning in 1957, Önal has worked with nearly all the prominent directors of the Turkish cinema. Indeed, he himself is part of the living history of Turkish cinema.

Safa Önal was born in 1931 in Avanos, Nevşehir, in the middle Anatolian region of Turkey. His father, Fahrettin Önal, a governor and mayor, was an amateur artist as well as having his official job. He used to paint, play the kanun (Turkish zither) and write poetry and fiction. Some of his poems dedicated to his wife and Safa Önal's mother were set to music.

Safa Önal began writing fiction in 1945, when he was a student in Haydarpaşa High School. He published four volumes of fiction in later years. After his first novel was filmed, Önal began to work incessantly for the filmmaking business. He wrote scripts for numerous drama series on TV and photo-novels for newspapers, besides about 400 movie scripts, which makes him a worldwide script-writing monster.

Safa Önal also directed more than 40 movies. His films are generally romantic dramas with some comic sequences. He was a productive director, though not the most-talented one. I think most people who know his works would admit that the best word to describe Önal's art would be "scriptwriter."

Among Safa Önal's approximately 400 scripts, some like "Vesikalı Yarim" (My Prostitute Love), "Tatar Ramazan" (Ramazan the Tartar) and "Ah Güzel İstanbul" (Oh Beautiful Istanbul) are the most affectionate ones.

Ahmet Uluçay: A true legend thanks to a single film

Ahmet Uluçay is a unique filmmaker in the Turkish film industry because he made only a single long film, but received a vast amount of critical acclaim from various circles including filmmakers, critics, fiction writers, poets, et cetera.

Uluçay lived a relatively short life. He was born in 1954 and passed away in 2009. He was able to complete only one film, "Karpuz Kabuğundan Gemiler Yapmak" (Making Boats out of Watermelon Rinds) after being the director of a few short films. He was diagnosed with an aggressive brain tumor as he was making his second long film, "Bozkırda Deniz Kabuğu" (Seashell in the Desert), and unfortunately he did not survive. However, Uluçay was praised like a national hero since the premiere of "Karpuz Kabuğundan Gemiler Yapmak" in 2004.

Ahmet Uluçay was born and lived most of his life in a village of Kütahya, a province in western Turkey. Because of this, some people preferred to call him "the villager-director." Sevin Okyay, a film critic and a friend of Uluçay's, tells us that Uluçay at first did not mind the nickname, but after a while, it annoyed him. Villager or not, Ahmet Uluçay was a successful director who attended national and international festivals and won about 40 awards for his work. In addition, he was able to create a special audience for his art.

"Karpuz Kabuğundan Gemiler Yapmak," the one and only sample of Uluçay cinematography, is a naive, and to some extent experimental film, which tells about two Turkish village boys who have ambition for the movies. There are also subordinate themes in the film like love, friendship, rural life, imagery of adolescence, et cetera. Finally, the humorous cinematographic language of Uluçay makes it easy and pleasant to watch his film.

Yeşim Ustaoğlu was born in 1960 in Sarıkamış, Kars, though she is originally from Trabzon, in the Black Sea region of Turkey. She graduated from the School of Architecture of the Black Sea Technical University. During her studies at the School of Architecture, she visited Austria with a scholarship for architecture for a single semester, where she also received training in stage arts. She then did a master's degree in the Restoration Section of Architecture at Istanbul Technical University. She worked as an architect, journalist and film critic before she directed her first short film "Bir Anı Yakalamak" (To Catch a Moment) in 1984.

Yeşim Ustaoğlu has been a progressive filmmaker since the early 1980s. She made several short films until the end of the 1990s, attending many national and international festivals and for which she won various awards. "İz" (Trace), filmed in 1994, was her feature film debut, and the director presented it at the Moscow International Film Festival.

Ustaoğlu received national recognition for her "Güneşe Yolculuk" (Journey to the Sun) in 1999, where she employed political irony to throw light on the Kurdish issue in Turkey. Yeşim Ustaoğlu continued to present the point of view of minorities like the Kurds, convert Greeks ("Bulutları Beklerken," Waiting for the Clouds, 2004), women ("Sırtlarındaki Hayat," Life on Their Shoulders, documentary, 2004), and old people ("Pandora'nın Kutusu," Pandora's Box, 2008) in her later films. She generally does not utilize a political rhetoric, but instead she implies political statements using individual but infrequent dramatic situations.

Yeşim Ustaoğlu is an international "indie" filmmaker who deals with encounters and the state of limbo within the human life.
Last Update: Mar 07, 2015 12:09 pm
RELATED TOPICS