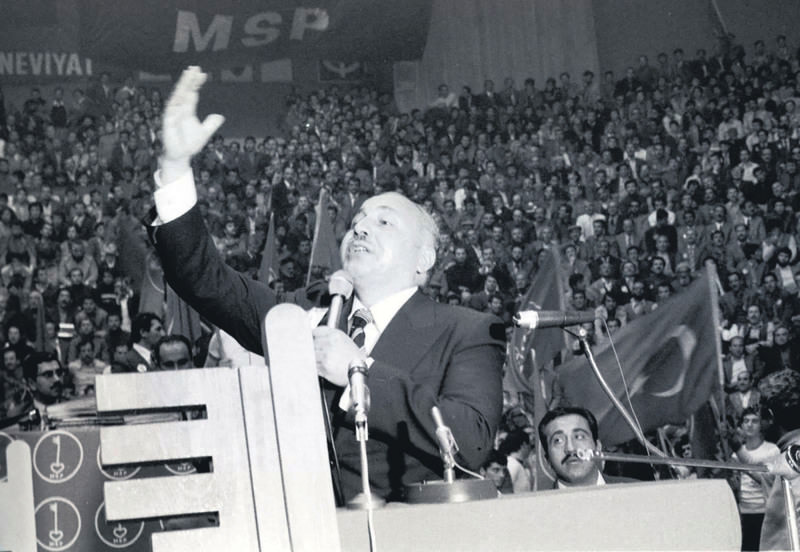 A brilliant machine engineer and an influential politician, Necmettin Erbakan (1926-2011) initiated the first anti-secular Islamic movement in the Turkish political arena with political parties that were closed one after another

Turkish politics was under the impact of former army officers during the initial phase of the Republic. This was normal to some extent, since those army officers were the ones who were in command during the War of Independence that eventually rescued the country from the enemy's occupation. After a while, the weight balance in politics tipped to the jurists. The Kemalist single-party rule required law-based reforms; thus, the law business became more prestigious than ever, and jurists began to enter the parliament, and the cabinet. The above-mentioned tendencies continued until the 1960s, when a new circle of politicians emerged- the engineers. The politicians, who were engineers by profession, may seem irrelevant to the contemporary reader. However, every young Turkish engineer thought he had a chance to become a prominent politician from the mid-1960s until the 1990s. I say "he," which stems from the fact that engineering has been a mostly male-dominated business in Turkey and nearly all of the engineer-politicians have been males. The engineers' dominance in politics beginning with the 1960s was due to the fact that Turkey made its first Development Plan in 1965, and after that development became the most significant topic of the political race. Every party and each candidate had to answer the question of how to make Turkey one of the developed countries until postmodern identity politics replaced the former type. Politicians with a university diploma in engineering have not disappeared. There were more than 70 engineers in the 24th parliament of Turkey, yet the number of jurists was many more than that. One-fifth of the Grand National Assembly of Turkey members were jurists by profession. So, three engineers impacted Turkish politics from the mid-1960s until the 2000s: Demirel, Erbakan and Özal. All three were from the same university - Istanbul Technical University (İTÜ) - and they graduated in successive years. The first of the three engineer-politicians to begin a professional career was Necmettin Erbakan, who graduated from the İTÜ Mechanical Engineering Department in 1948.

Necmettin Erbakan was born on Oct. 29, 1926 in Sinop as the son of Mehmet Sabri, who was then a public prosecutor. Necmettin's grandfather was Hüseyin of the Kozanoğulları tribe, who were local notables of the Adana region. Hüseyin moved to Istanbul and became a close affiliate to the Ottoman Sultan of the time, Abdülhamit II. Mehmet Sabri married twice. Necmettin's mother was Kamer Hanım, whom Mehmet Sabri Bey married while he was a public prosecutor in Sinop, after his first wife died. Kamer's family roots went back to Imam Shamil, the hero of Caucasia during the Russian invasion in the 19th century, on her father's side, and to Prophet Muhammad (peace be upon him) on her mother's side. Erbakan was schooled in elementary schools in Kayseri and Trabzon due to his father's job. In 1937, he was sent to Istanbul in order to attend the Istanbul Erkek Lisesi (Istanbul High School for Boys). He graduated from this school with the highest degree in 1943 before he attended the high mechanical engineering school of the Istanbul Technical University. This was a school with six grades. However, after Erbakan attended the school, its grade system was lowered to five, so he graduated in 1948. Necmettin Erbakan was always a brilliant student. He began studying as a research assistant at the Vehicles Master Program at the same faculty he graduated from. The school sent him to RTWH Aachen in Germany to complete his doctorate. He received his doctoral degree and was invited to conduct research in the Klockner Humboldt Deutz AG factory and the DVL Research Center, which was working for the German army. Erbakan was among the research staff working for the design of the Leopard tanks. He submitted three theses in two years in Germany. Many people think that Necmettin Erbakan was a genius due to this extraordinary success. In 1953, Erbakan returned back to Istanbul in order to gain an associate professor degree from İTÜ. He became the youngest associate professor up to that time. He was only 27 years old when he obtained the degree.

A new enterprise in the national industry

Erbakan joined the army on order to serve his military duty for two years before he established a multi-partner company to produce engine vehicles in Turkey. The factory he founded began operating in 1960, a fact which was congratulated by Adnan Menderes and Hasan Polatkan, the prime minister and the minister of finance of the time. Meanwhile, Erbakan was also teaching at the university. He was awarded a professorship in 1965. Gümüş Motor enterprise collapsed because of wild competition with vehicle importers. Erbakan tried to keep up with the competition, and so he entered the Istanbul Chamber of Industry in 1959. He decided to continue fighting for the industrial development of Turkey in the Union of Chambers and Commodity Exchanges (TOBB). He became the general secretary of TOBB in 1967. In the same year, Necmettin Erbakan married Nermin Saatçioğlu, a secretary who worked in the TOBB. The Erbakan couple had two daughters and one son, namely Zeynep born in 1968, Elif born in 1974 and Fatih who was born in 1978. Erbakan's attitude at his position in TOBB was political. He represented the local small industries of provinces of Turkey against the big import substitution industries of Istanbul. This confrontation would form his destiny. He would always support development relying on the local small industries against the import substitution understanding type of industrialization, which was represented by his classmate Süleyman Demirel.

In French there is a saying "noblesse oblige" (nobility obliges), meaning that the wealthy and the powerful should do their duty as befits that wealth or power. Necmettin Erbakan was trying to oblige the wealthy and powerful people to create the national industry of Turkey. It might be a historical movement, but history did not go that way. First, Erbakan was obliged to step down from his chairmanship at TOBB. Although he won the TOBB election for the chairman, the council of ministers led by Prime Minister Süleyman Demirel annulled TOBB election and forced Erbakan to quit. Second, his application for the general elections to become a member of parliament for the Justice Party (AP) was rejected in 1969. Thus, Necmettin Erbakan changed his path and entered the elections from the province of Konya as an independent candidate. He obtained the required vote and became a member of Parliament.

After one year in the Grand National Assembly of Turkey, the independent deputy Necmettin Erbakan, founded the National Order Party (MNP) with 17 of his friends on Jan. 17, 1970. The motto of the MNP was "morality and spirituality first." This was an open allusion to the Islamist mentality of the party. The MNP was the first Islamist party in the multi-party democracy period. However, the MNP did not survive long, because the party was annulled after the military coup in 1971. The grounds for the annulment decision was "anti-secularism," which would be the sword of Damocles over the head of Necmettin Erbakan and his party, or to be more accurate, parties. After the MNP was annulled by the Constitutional Court in May 1971, Erbakan went to Switzerland and did not return until the 1973 general elections. In October 1972, he founded a new party called the National Salvation Party (MSP), which gained 48 chairs in the parliament with 12 percent of the votes. Erbakan accepted the winning Republican People's Party (CHP) chairman Bülent Ecevit's offer, to establish a coalition cabinet. Thus a CHP-MSP coalition was established. Though this coalition was short-lived lived, both leaders used their time positively for their party's interests. The Cyprus Peace Operation, which helped to rescue the Turkish Cypriots from the oppression of the terrorist organizations on the Greek Cypriot side, made their supporters believe that Ecevit or Erbakan was a hero, respectively. In the second half of the 1970s, the Turkish economy and politics confronted successive crises. Erbakan and the MSP were sometimes a part of the government, and of the opposition at other times. Eventually, Erbakan was among the establishers of the National Front coalitions. He made three coalitions in seven years until the Sept. 12, 1980 military coup.

The political life of Necmettin Erbakan and his followers after the 1980 military coup is a completely different chapter. Erbakan and top MSP members were arrested and charged for anti-secularism and illegality in October 1980. They were released in July 1981 and acquitted of all charges in 1983. However, he and some of his close friends were prohibited from politics like other party leaders including Ecevit, Demirel and Türkeş. The political prohibition over the former party leaders was annulled by the 1981 referendum. In the same year, Erbakan was elected as the chairman of the Welfare Party (RP), which was founded by his followers in 1983. The RP entered, but lost the general elections in 1987. They entered parliament in the 1991 elections, depending on the nationalist-Islamist block. The political views and attitudes of Necmettin Erbakan and his fellow party members were among the most discussed matters in Turkish politics during the 1990s. The RP won the 1994 and 1995 elections. However, he was not allowed to establish the cabinet due to a six-month delay. Eventually, Erbakan established a coalition cabinet with Tansu Çiller, the chairman of the Right Way Party (DYP) in the summer of 1996. Both the West and pro-West circles in Turkish politics opposed his tenure as prime minister of Turkey. In Feb. 28, 1997, the National Security Council, impacted by the military heads, announced strict rules against so-called anti-secularism in Turkey, which caused the dissolution of the Erbakan-Çiller cabinet in the summer of 1997. Erbakan and the RP faced charges by the Constitutional Court, and the same court banned him from politics for five years in 1998. The court also annulled the Welfare Party. Erbakan's friends established the Virtue Party (FP), which was also annulled in 2001 before its successor, the Happiness Party (SP), was founded. Erbakan's last years passed with trials. He was sentenced to house arrest in 2008, but his sentence was pardoned by President Abdullah Gül due to his poor health. Necmettin Erbakan died on Feb. 27, 2011. His followers held two funerals for him, one in Ankara and one in Istanbul. He is buried in Zeytinburnu Cemetery. Many circles honored him after his death, including those who were strictly against his political attitude.