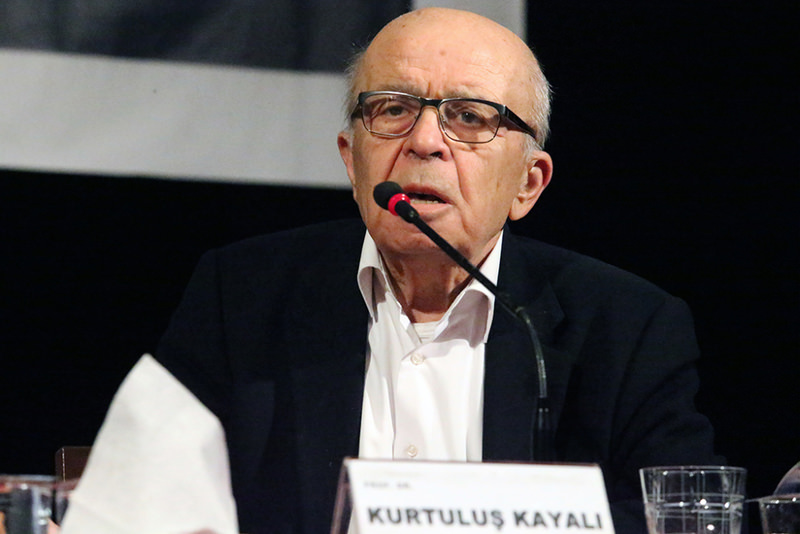 Kurtuluş Kayalı, aside from being a respected historian who worked on modern Turkish history, has been an acclaimed academic who is also interested in cinema, literature, humor and sociology

There are two types of thinking concerning the subject of thought. One type is thinking on a certain subject, philosophical, religious or scientific. The subject of the other type of thinking is the thought itself. This can be called meta-thinking or reflective thinking that means thinking about thinking.

There is an ambiguous term used in Turkish intellectual circles in the last half century called "Turkish thought," which does not imply any specific subject matter or gradual changes of certain philosophers.

However, in recent years, a kind of sociology of thought written in Turkish occurred. There are many papers, articles and books written on certain philosophers who lived and wrote since the Tanzimat period, which is generally accepted as the start-point for modernization and westernization in Turkey. Among these studies, Kurtuluş Kayalı's work continues to stand out due to his examining of Turkish thought for the last 40 years with the help of reflective thinking.

Kurtuluş Kayalı is a member of the 1960s generation who were known for their enthusiasm for changing the world and their thirst for learning. Kayalı has been more of a learner than a revolutionary.

Kayalı was born in Kırşehir in 1949. He received his early education at Nevşehir Nar Elementary School, Talas American Secondary School and Tarsus American High School before attending the International Relations department of Ankara University's Faculty of Political Sciences, graduating in 1972.

His personal history about him being an undergraduate and becoming a scholar is tragicomic. He completed his doctoral study in 1978 with the dissertation "Ordu ve Siyaset" (The Army and Politics). Meanwhile, his 13 applications to the university to be employed as a research assistant were rejected. On the 14th time, he succeeded and was accepted.

Unfortunately, this did not last long. The Sept. 12, 1980 military coup put great pressure on higher education. Kayalı was among the fired scholars and was unemployed from 1983 until 1986.

Kurtuluş "Hoca" (master, teacher or similar) became a professor in 2001 at the age of 52. Though he is a professor of political sciences, he works in the history department and gives lectures in the sociology departments of various universities.

He likes mocking the difficulties he has endured in university life. He says, "I might have not become a professor if any of the eight accidental occasions happened differently."

Born to think and teach about thinking

Kayalı is over all academic titles. He never writes his name as Professor Kayalı - a chance to show social status for scholars in Turkey that nearly all of them take. Nonetheless, he is a professor in a broader sense. He not only teaches students in various universities, but he also teaches a special non-scholar audience with the help of serial articles he has been writing since the late 1970s.

Indeed, Kayalı is a socialist. However, he has never offered contributions to socialist political ideology in his articles. On the contrary, he has always made a strict differentiation between thinking and ideology. This has released him from the ideological standards of socialist or leftist scholars when writing his thoughts.

Kayalı is generally interested in the gradual changes in the thoughts of certain thinkers, the circle of thinkers or subject matter and vehicles of thinking. He has worked to lessen the effect of clichés in studying modern thought in Turkey.

For instance, he does not support the idea that the scholars and intellectuals were freer than ever in the 1960s. Instead, he prefers to emphasize the freethinking of the philosophers belonging to different ideological circles in the 1940s. Kayalı has shown that the philosophers of the 1940s were freer to launch new and free thoughts since their ideological environment was unable control them as much as it could in the 1960s and later.

An ambassador of thinkers

Late literary critic Hüseyin Cöntürk once told me that he was like an ambassador among ideologies. I suppose Kurtuluş Kayalı is a real ambassador for thinkers from every ideological circle. Even his very early articles imply this. He first wrote about Hasan Ali Yücel for the "Türk Solu" (Turkish Left) journal, and then he wrote about Nihat Sami Banarlı for "Meydan" (Square) journal in 1968. This incident shows that Kayalı was deliberate in writing his thoughts on thinkers, not ideological personalities.

Kayalı has been unfortunate in some aspects since the rightists have always seen him as a leftist while his fellow-leftists have got used to seeing him as a friend with confusions in mind. Both sides do not like any confusion of any kind, though they have changed their thoughts through decades with a confusing manner.

Kurtuluş Kayalı has never obeyed the ideological do's and don'ts since his early writings. He is naturally inclined to write about the left-wing thinkers, which should not shadow the fact that he has examined many right wing and Islamist intellectuals and scholars.

Kayalı likes to use the Turkish words "tasviri" (descriptive) and "tahlili" (analytical). This is to show his special support for analysis against mere description. He criticizes scholars who write hundreds of pages with full descriptions of the topic but make little or no analysis.

Kayalı himself is mainly analytic in his articles. In case he is obliged to provide some description to the reader about a certain fact, he generally provides this in a comparative way, which helps the reader to makes his or her analysis.

I believe that the best thing you can learn from Kayalı about modern Turkish thought since the 1940s is to make your personal analysis in a comparative manner. Yet, this takes a lot of reading.
Kayalı does not just hand you a fish, but he teaches fishing.
Last Update: Aug 01, 2015 1:45 am
RELATED TOPICS