İdris Küçükömer: The man who changed definition of right and left in Turkey 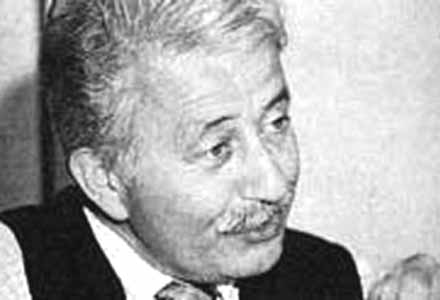 A respected economist and philosopher, İdris Küçükömer became known for his theory that argued the left and right wing politics in Turkey have been defined wrongly

The Turkish left was like a private club of intellectuals with ultra-Western tendencies until the 1960s. Indeed, there were several socialist groups even at the time of the Ottoman State. However, these were all very small groups of elite individuals who defended socialist views without any action in Salonika and İstanbul, two major cities where many Ottoman intellectual movements emerged.

The first "praxis" group was the Turkish Communist Party (TKP), which was founded in Baku in 1920 during the War of Independence against Greece and the Allies. This points to another elitist aspect of the Turkish left, which is that nearly all of the leftist parties in Turkey supported the Kemalist ideology, even though they were fighting against the Kemalist government.

Until the 1960s, the TKP was the mainstream socialist movement in Turkey. After the 1961 Constitution came into effect, numerous Kemalist-socialist groups of mostly young people formed. Besides, the Workers' Party of Turkey led by Mehmet Ali Aybar, a Marxist lawyer, entered Parliament, gaining 3 percent of the votes and 15 seats. Socialism and communism were now among the popular political ideologies in Turkey for the very first time.

There were many discussions among Turkish socialists in the 1960s. However, most of them were sure of their affirmation of Kemalism and the Republican People's Party (CHP) as progressive forces. Only an economist who dealt with the political economy of Turkey did not affirm Kemalism and the CHP: İdris Küçükömer. Before that, İsmet İnönü, the natural leader of the CHP until his death in 1973, announced that the CHP was "left of center," which Küçükömer rigidly denied because of historical facts showing that the CHP was really a right-wing party of Turkish bureaucrats.

Küçükömer was born on June 1, 1925, in Giresun in the Black Sea region. He lost his father at the age of 9. He had to leave his family's house and his homeland to get an education after elementary school. Küçükömer once said that he used to pray to God as a child asking Him to give him a hard life. This is interesting, since his childhood was hard enough. However, God seems to have listened to the little boy; thus, he lived a very, very hard life.

Küçükömer graduated from Trabzon High School and the Faculty of Economics at Istanbul University. He continued his academic studies in the same faculty and was given the title of assistant professor. Unfortunately, the university senate did not approve his gaining the position of attending professor later in the same faculty. Küçükömer sued the university senate, and the Council of State passed a resolution supporting his case. Nonetheless, his attending professor title was approved in 1976 after 10 years' delay.

The Istanbul University senate did not want to work with socialist scholars. Besides, a special Code (known as Code no. 1402) was enacted after the Sept. 12 military coup that helped the Higher Education Council (YÖK) and the university senate fire any professor for political reasons. So, Küçükömer and his close friend and colleague Sencer Divitçioğlu were fired because of Code no. 1402 in the early 1980s.

Küçükömer was not a classical scholar of economics. Although he taught classical subjects, too, in the faculty of economics and wrote several textbooks on economics, Küçükömer's main concern was the dilemma between the ruling elite and the masses in Turkey.

In his initial articles published in the early 1960s in Yön (Direction), a journal of left-Kemalists, Küçükömer argues that conservatives rule in Turkey and the people are not allowed to contribute to the processes that result in critical decisions. "Social action is mutual action," he writes in "Yön" in 1962, "To have mutual action, persons should have personality."

In this respect, we can say that early Küçükömer was a radical left-Kemalist since he did not argue the principles of Westernization; he only asked for the people's contribution to political action. "In Turkey, the crowd has not yet been allowed to go for alternative interpretation and action," he writes, "Yet, the wind of change coming from the West affects Turkey and helps Turkey shift to a different social system with alternative values."

The May 27 military coup affected the entire Turkish left. Many of them found it as a progressive but not sufficient movement to establish socialist rule in Turkey. Therefore, they were looking forward to a socialist junta to take over power. Once, the prominent left-Kemalist Doğan Avcıoğlu said, "I'd rather convince a colonel than convince 10 workers." Revolution was urgent for them; so, they would not hesitate in accepting Machiavellian opportunities.

Similarly, Küçükömer worked for some time as an affiliate of the famous Talat Aydemir junta before the junta's coup plan was exposed, Aydemir was hanged, and Küçükömer was unofficially taken into custody for a few months. He said: "They gave me a chair and told me to sit. I sat on that chair for several months."

Sitting on the unofficial custody chair for several months made the junta affiliate think about what he had done, what others were doing and what was going on between the elite rulers and the masses.

The change in Küçükömer's political views can be seen in his articles published in the dissident Ant (Oath) journal. This was the alternative socialist periodical to Yön. Formerly, Küçükömer argued about the overall decisions of the ruling elite in his articles. Now, he began to argue about the situation of real people.

'The alienation of the regime'

Küçükömer made a significant move in 1967 by publishing a political brochure titled "Düzenin Yabancılaşması" (The alienation of the regime), as a socialist in opposition to his left-Kemalist adversaries.

In this brochure, Küçükömer argues that Turkey cannot be entirely Westernized. Regulations coming from the top of the state for the sake of Westernization help capitalism capture opportunities in Turkey. However, Turkey cannot become a central country in the same capitalist system. Regulations, decisions and actions are taken by a small group of elites every time without the contribution of the people because the people are not organized as civil society against the political elite.

Küçükömer's table of political tendencies, which is known as "the left is the real right, while the right is the real left in Turkey," shocking the leftists, comes after that. He examines the history of the bureaucratic elite since early modern times and shows the continuity between the Ottoman bureaucratic party with the CHP in such significant aspects as elitism, totalitarianism, anti-populism and Westernism.

"The left of center" is the real conservative right, Küçükömer proposes, and the Islamist-Easternist crowds are on the left. According to him, parties on the left or the right of center are all in the same line of bureaucratic elite. Only the masses carry a potential real left.

Küçükömer became a target for the dogmatic left. They did not want to listen to his enriching views. Some people called him "confused," while some others preferred to say that he had become an Islamist, which was even closer to the truth. Küçükömer was a revolutionary Marxist socialist who was studying the possibility of a democratic socialist revolution that depended on civil society.

Küçükömer interpreted the 1973 coalition between the leftist Republican People's Party (CHP) and the Islamist National Salvation Party (MSP) as the "historical government of the socialist and democratic parties." This means that he thought the left embraced the people of Turkey without any bureaucratic prejudices. However, as the CHP-MSP coalition could not stand the pressure coming from the interior and abroad, Küçükömer's "historical" hopes diminished.

Küçükömer was silent in the second half of the 1970s when leftist terrorism was among the main issues in the political arena in Turkey. After the military coup in 1980, he lost his job; and a misdiagnosis cost him his health. Finally, he died on July 5, 1987, in Istanbul.

Küçükömer's works have been collected by Yücel Yaman in six volumes and published years after his death. Our dissident professor was working on an interesting book before he died: "Halk demokrasi istiyor mu?" (Do the people really want democracy?). His related notes have been published in the form of an unfinished book. The notes show that Küçükömer's astute mind had shifted from economics to culture in the early 1980s.

Küçükömer's personality and views are generally cited by liberals and Islamists in Turkey. Left-Kemalist circles continue calling him "confused," in spite of the fact that mainstream left-Kemalism has been in a vortex since the 1990s.
Last Update: Jan 20, 2016 12:49 pm
RELATED TOPICS