İlber Ortaylı: The man who introduced history to popular culture 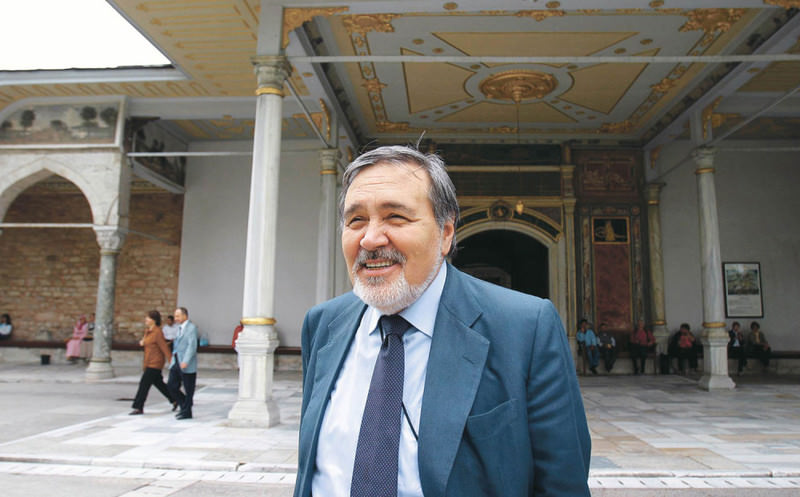 Thanks to his special knowledge and attention to detail, Ortaylu0131 was also appointed the director of the Topkapu0131 Palace Museum for seven years before he retired from the position in 2012.
by Hakan Arslanbenzer Oct 10, 2015 12:00 am

One of the most popular historians, in the recent turkish agenda, academic and writer İlber Ortaylı has become known for ironically insulting people who lack a cultured perspective of the world or historical facts, which has garnered the attention of Turkish audiences watching him on TV

History was not among popular culture topics until fairly recently in Turkey, perhaps because of the negative attitude of the state's cultural policy to history. In modern Turkey, history has referred to only the official state history, which is taught to the masses from textbooks. The scientific research of historiography has nothing to do with contemporary issues.

Recently, a group of historians led by İlber Ortaylı has received media coverage and began speaking out about their approach to Turkish history in general and specificly, controversial historical issues including World War I, the Mustafa Kemal Atatürk period, Sultan Abdülhamid II and others. These topics have been discussed by the intelligentsia from the beginning, but Ortaylı led historians in bringing them to light.

Ortaylı is a very interesting figure depending on how one views his, what some consider, arrogant attitude to what he calls "semi-ignorance." Social media users have usurped this attitude and prepared too many memes with his picture and snobbish words in order to make fun of him. Though a serious historian and official museum director, Ortaylı has been transformed into "Nasreddin Hodja" type.

İlber Ortaylı was born on May 21, 1947, into a Crimean Tatar family in a refugee camp in Bregenz, Austria. His family was from the village of Ortay in Kefe (Feodosia), Crimea. They fled to Austria to escape Stalin's persecution and killing. Eventually they moved to Istanbul when Ortaylı was 2 years old.

His parents were a well-educated couple. His father Kemal was an engineer who spoke Turkish, Russian, English and German while his mother Şefika taught Russian at Ankara University's Faculty of Language, History and Geography. Şefika Ortaylı descended from a noble Crimean family and carried the heritage of Muslim scholars. Her ancestors even counseled the khans of the Crimean Khanate. The family was also known for producing some of Crimea's muftis.

Ortaylı first attended St. Georg Austrian College in Istanbul before he graduated from Atatürk High School in Ankara. He achieved a bachelor's degree in history at Ankara University in 1969 before he moved to the United States for postgraduate studies at the University of Chicago under Professor Halil İnalcık as well as at the University of Vienna. Ortaylı returned to Ankara to complete his doctoral thesis at Ankara University's Department of Political Science. He submitted a thesis titled: "Local Administration after the Tanzimat" in 1978. A year later he became an associate professor thanks to his study titled: "German Influence in the Ottoman Empire." However, he resigned in 1982 because of the junta administration's oppression in the early 1980s.

After resigning from his position at Ankara University, Ortaylı worked as a visiting professor at international universities, including Oxford and Cambridge, as well as institutions in Paris, Berlin, Vienna, Moscow, Princeton, Munich, Tunis, Kiel, Sofia, Ioannina and Strasbourg. He was promoted to the rank of professor in 1989 after his return and became the chairman of the Department of Administrative History at Ankara University from 1989 until 2002. In 2002, he took up an appointment at Galatasaray University. He is still working there, but he has also taught at Bilkent University as a visiting professor.

Thanks to his special knowledge and attention to detail, Ortaylı was also appointed as the director of the Topkapı Palace Museum for seven years before he retired from the position in 2012.

Ortaylı married Ayşe Özdolay when he was 35. The couple had a daughter, Tuna, who was named after the Danube River of central Europe. The couple divorced in 1999 and he never remarried.

Beginning with popular discussion panels in the 1980s, Ortaylı has carried historiographical debates about Turkey and the Ottomans to the public. Leveraging his vast knowledge and effective public speaking skills, Ortaylı gained a positive reputation in the media and among the public. He is known as the man who made people love Turkish history, especially the history of the Ottoman Empire.

Ortaylı began publishing columns, essays and articles in collected volumes in the early 2000s, which are among the best-selling books in the country, and brought great fame to the sophisticated historian. Moreover, he has never been willing to take sides politically, which has prevented strong opposition against him.

There are two main criticisms of Ortaylı. One is that he does not hesitate to insult people since they cannot reach his capacity of knowledge, and the other is that he left the real profession of history and has acted like a gourmand of history in the context of popular culture.

Indeed, Ortaylı is a respected scholar of administrative history of the late Ottoman Empire. However, his academic studies are from the 1960s to the 1980s. He has been a teacher, speaker and popular writer of Turkish, Balkan, Russian and European history since the mid-1980s. Ortaylı continues to appear on talk shows speaking about interesting historical facts and concepts, writes newspaper columns and publish history books.

The longest century of the Ottoman Empire

Ortaylı is not merely a historian, he is like the Danube River, exceeding all national borders. His thinking, researching, learning, teaching and writing abilities define him as a man of culture. His knowledge seems infinite, while he can also read and write in various languages including Turkish, Arabic, Persian, German, French, Latin, Italian, Greek, Russian, Slovakian, Romanian, Serbian, Croatian and Bosnian. However, he owes his reputation to a single volume published in 1983: "The Longest Century of the Empire," which examines the central state of the Ottoman Empire in the 19th century. When this volume was published, Ortaylı became the champion of the institutional continuity approach used in Turkish intellectual circles. Institutional continuity implies that the transition to the Republic of Turkey from the Ottoman Empire did not happen in the form of a revolution. Rather the institutions of the Republic continued from the empire by being readapted and reformed.
RELATED TOPICS