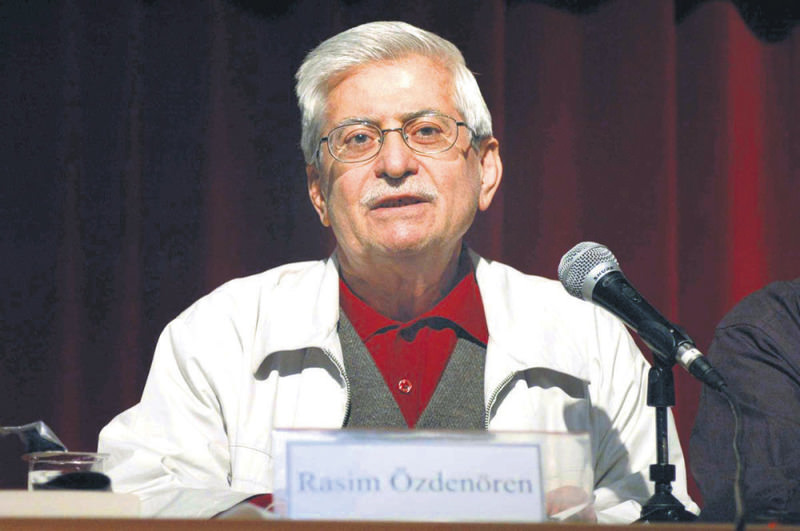 An accomplished author of stories and essays, Rasim Özdenören is known as an Islamist writer with a strong narrative style who does not impose his ideas on readers. Özdenören recently received the Presidency Culture and Arts Award in the area of literature

The poetic revolution created by the "İkinci Yeni" (Second New) movement displaced the conventional understanding of both poetry and language. Thus, fiction writers should also make up their minds to either join the revolutionist attitudes of the day or continue with old-school storytelling.

The dilemma of modern Turkish fiction was that the old school was more successful than the modernist during the 1950s and 1960s. People liked revolutionist poets, but they didn't show the same enthusiasm for existentialist fiction. "İkinci Yeni" poets became popular while the "A Kuşağı" (Generation A) writers were overshadowed by the conventional writers of the previous generation.

Both Islamists and seculars are involved in writing existentialist fiction. One of these Islamist existentialists is Rasim Özdenören, who is also a politically engaged essay writer and columnist. He has produced three types of texts in his writing career so far: The essay or column written from an Islamist point of view; the existentialist novella and the essay on art. Özdenören's works seek to combine or merge the modernist and the Islamist points of view.

Rasim Özdenören was born in Turkey's southern province of Kahramanmaraş on May 20, 1940, one of twin boys, to Hakkı Özdenören, a civil engineer and public servant, and his wife, Ayşe. His father was working in Kahramanmaraş when he married Ayşe in 1937. He was 25 years older than Ayşe and raised by a literate family known as the "Kahvecioğulları," in Istanbul's district of Eyüp, while Ayşe was a distant relative of the great poet, Necip Fazıl Kısakürek.

Özdenören had three siblings. His twin brother is the late poet Alaeddin Özdenören who died in 2003. The other two are twin sisters Necibe and Nedime, who were born 20 months before the boys. Necibe died of an intestinal disorder when she was only 9 months old.

Özdenören was first schooled in Sakarya Elementary School in Kahramanmaraş before his family moved to Malatya for his father's work. Rasim loved reading. His favorite genres were adventure and historical epics.

Özdenören finished the sixth grade in Malatya before moving to the eastern Anatolia region of Tunceli with his family, where his father's public-sector employer had reassigned them. Actually, Özdenören's father was exiled to Tunceli for reading the Ulus daily, an opponent newspaper of the 1950s. He retired the following year and Özdenören graduated from secondary school in Tunceli.

He went on to attend Maraş High School in 1955, where he met Cahit Zarifoğlu and Erdem Bayazıt, who would later become prominent poets. The trio founded a literary group at the high school and they would read and write for the Hamle (Move) literary journal, published by Nuri Pakdil, also a graduate of Maraş High School. Özdenören wrote his first short story in 1956 with the encouragement of one of his friends, Ali Kutlay.

Özdenören subscribed to literary journals like "Varlık" (Existence), "Yeditepe" (Seven Hills), "Yenilik" (Novelty) and "Seçilmiş Hikayeler" (Selected Stories). These were all Kemalist publications but Özdenören and his friends were looking for more Islamic and conservative writers and publications to explore. However, Özdenören admitted that he had personally grown accustomed to the discourse of Kemalist journals. His literary discourse does not stray far from that of "Generation A" writers, who are secular modernists. Özdenören's first short story, "Akar Su" or "Stream," was published in Varlık in January 1957.

Özdenören also met Nuri Pakdil and Mehmet Akif İnan during his time at Maraş High School. As a result, Cahit Zarifoğlu would later write a long poem titled, "Yedi Güzel Adam" or "Seven Good Men," referring to this circle of friends at high school. A television series by that same name was later aired in 2014 and was inspired by the true story of these writers' lives.

Rasim Özdenören attended the school of law in Istanbul, but left for the school of journalism. His main academic focus was reading and writing. He was influenced by foreign writers such as Russian author Fyodor Dostoyevsky and American author William Faulkner, in addition to Turkish writers such as Sait Faik, Sezai Karakoç and Necip Fazıl. Özdenören met Karakoç and Fazıl in 1962. He would later describe his relationship with Karakoç as that between a master and a disciple.

Özdenören became the closest follower of Karakoç. Despite this, he continued to correspond with his high school friends. They sought to make a difference in the writing world, while keeping in contact with prominent, right-wing writers and periodical writers like Fazıl, Karakoç and Büyük Doğu (Great East), Yeni İstiklal (New Independence) and Diriliş (Resurrection). However, they would also publish periodicals of their own, which included Edebiyat (Literature) by Nuri Pakdil and Mavera (a mystical Turkish word meaning Meta or Beyond) by Özdenören, Cahit Zarifoğlu and others from the writers' circle of friends. By 1965, Özdenören edited the literary section of Yeni İstiklal by Mehmet Şevket Eygi. One year later, he began publishing his stories about Karakoç in Diriliş, in 1966. He also joined Pakdil in founding Edebiyat in 1969.

Özdenören published his first volume of short stories; "Hastalar ve Işıklar" (Patients and Lights), in 1967. In that same year, he graduated from Law School and began to work at the State Planning Organization (DPT). He worked for the Ministry of Culture from 1975 to 1978 before returning to the DPT in 1980, where he worked until his retirement in 2005.

Where there are humans, there is tragedy

Özdöneren got married in 1971 and published his second and third books of short fiction, "Çözülme" (Dissolution) and "Çok Sesli Bir Ölüm" (A Polyphonic Death), in 1973 and 1974, respectively. The latter is considered one of Özdöneren's masterpieces, a good reflection of his impressionist art in fiction. Indeed, Özdenören is more comparable to British-American impressionists like William Faulkner, Joseph Conrad and Virginia Woolf than to his fellow Turkish writers. Although he never turns to mere fantasy in his writing and instead focusing on his expression of concrete facts and the reality of human life, Özdenören incorporates the same, and slightly differing, techniques used by impressionists and existentialists. Characteristics of his works include the use of artificial and pure language, pensive tone, an ambiguous narrative point of view and the stream of consciousness.

Özdenören's main theme in the work, "Çok Sesli Bir Ölüm," is family tragedy. He believes in the importance of tragedy as a genre, saying that it should not be reserved for use only in Western literature. "Where there is a human," he states, "there is tragedy."

Özdenören has published more than 10 volumes of short and long fiction, while he has also collected his essays on art, Islamic faith, modern issues of the Muslim world and the state of being and living. He is a hard working essay writer and columnist as well as a precise writer of fiction.

Several autobiographical books and academic theses have been written about Özdenören's life; including fiction and analytical works. His 50th anniversary as a writer of art in fiction was celebrated formally in 2006. Rasim Özdenören was awarded various prizes, including the Eminent Service prize, given by the Turkish Grand National Assembly in 2008 and the Culture and Arts Grand Prize, awarded by the Presidency of the Turkish Republic in 2015.
RELATED TOPICS