Mehmed the conqueror, the lawgiver and the founder 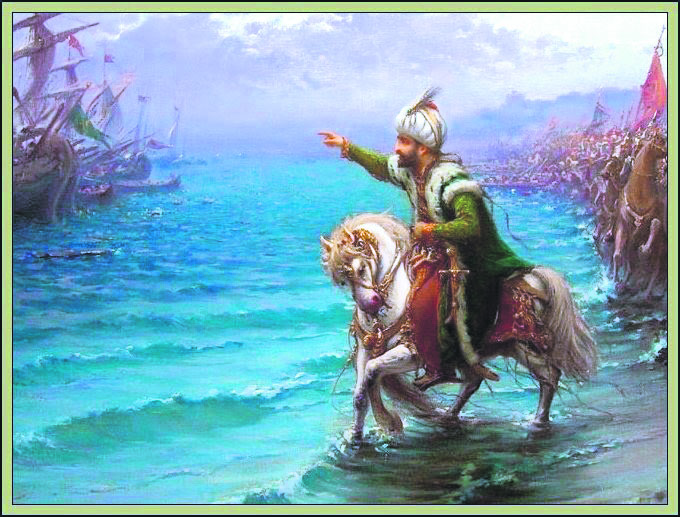 One of the most influential emperors of all time, Ottoman Sultan Mehmed the Conqueror conquered then-Byzantine capital Constantinople and opened a new era in world history

The early modern era of Europe had a complicated state of affairs with the rationalization of power in the setting of multiple empires. As the bureaucracies of clashing empires applied more rational methods to doing business, the imperial mythology that governed them became irrational. The rationale and intelligence of European leaders from the 15th century to the 17th century served as a way to gain more power.

The dawning of the 15th century brought the premature early fall of the Ottoman Beylik, as Bayezid I suffered a severe loss to Tamerlane at the Battle of Ankara, and his sons fought each other for the next decade over who would ascend to the throne. However, by the mid-15th century, the Ottomans had destroyed the great Byzantine Empire and conquered its capital, the empire city of Constantinople (present-day Istanbul). How could this happen?

Two major sultans and their bureaucrats should be praised for this rise to power. Murad II was the first of his successors, who was a perfect warrior that defeated his enemies in battle. His successor and son, Mehmed II, is revered for his reputation as the conqueror of Istanbul. Yet, the conquest of Istanbul alone does not explain the success of Mehmed the Conqueror by itself. Not only an ambitious fighting sultan but also a conscious patron of sciences and the arts, Mehmed the Conqueror had greater ambitions to rule the entire world.

Making of a conqueror

Mehmed II was born on March 29, 1432, as the son of Ottoman Sultan Murad II and Hüma Sultan, who was a slave in the harem of the sultan in Edirne, the former capital city of the Ottoman State. Hüma Sultan's origin is widely disputed; some historians think that she was a French princess, while some others claim that she came from a noble Italian family. Regardless of her heritage, she was a slave girl in the harem of Murad II who gave birth to the greatest conqueror in Turkish history. Like other princes, Mehmed II was sent to the small towns of Anatolia to learn how to be a ruler: first travelling to Amasya and later Saruhan (now called Manisa). Molla Gürani, one of the most significant Islamic scholars in Ottoman history, was responsible for the education of the shahzadeh. Mehmed II was talented when it came to learning. Not only did he learn how to rule, but also how to read, write and speak various languages, including Arabic, Persian, Latin, Greek and Italian. The notebook of Mehmed II, which is kept in the Topkapı Palace Museum, depicts drawings of human figures and writings in several languages.

Mehmed II was first enthroned in 1444 as the result of his father's voluntary abdication from the throne. Murat II was a great warrior and defeated all of his enemies in the East and the West before settling final agreements on the borders of his state. However, Mehmed was only a child, and the bureaucrats and warriors around his throne were in dispute about continuing works. Furthermore, the Crusaders and the eastern beyliks found this an opportunity to attack the Ottomans. Eventually, in 1446, under orders from Çandarlı Halil Pasha, the representative of the balance policies, Murad II took the throne back from his son and resumed campaigns against his enemies.

Mehmed II could have decided to become a greater conqueror than his father, and I believe that he felt frustrated when Halil Pasha called his father back to the throne. Murad II calmed the eastern and western borders of the state with the power of his army and died in 1451.

Mehmed II, 19 years old, replaced him and began his reign. The young Mehmed needed to make a great move to make his second rule indisputable. So, he decided to conquer Constantinople, the capital city of the old Byzantine Empire. In fact, Turks had conquered the majority of the Byzantine lands, and the Empire throne in Constantinople was just a political card played by the Ottomans and Europe mutually.

Halil Pasha advised Mehmed to continue the status quo, while the young and ambitious Sultan didn't like this approach. So, he sided with the grand ghazi pashas -- mainly Zağanos Pasha - who believed that conquering Constantinople was of crucial importance for the Ottomans.

Constantinople was conquered on May 29, 1453, after a two-month siege. During the siege, the sultan, viziers and pashas faced controversies that cost Halil Pasha his head. Young Mehmed had such a focused character that anyone who aimed to prevent him from reaching his goal would pay for it. After the conquest of Constantinople, Mehmed II began to re-establish the old capital. He bought Hagia Sophia and converted it into an Islamic mosque. He also called on scholars and artists from across the old world. He opened an eight-part madrasa called Sahnı Seman in the new capital to promote the teaching of Islamic sciences.

The lawmaker Mehmed II ruled for 30 more years after his second ascension to the throne and conquered many lands, including the Anatolian region, the Black Sea region, the islands in the Aegean Sea, Morea, Bosnia and Serbia, Wallachia (a part of present day Romania), Crimea and even some parts of Italy. Despite these fascinating victories of war, as a mature sultan Mehmed II was more of a lawmaker than a warrior. Furthermore, his ambition regarding science, technology, culture and the arts should also be taken into consideration when portraits depicting him are drawn. Some historians think that he might have had early secular tendencies since he ordered an oil painting to be made of himself, painted by the famous Italian painter Cellini. He gathered eastern and western artists and scholars in his court, supported technologic innovations and more. Mehmed II fancied himself as the greatest conqueror in the history of humanity. Many Turkish sultans were raised hearing of the great conquests of Alexander the Great. So, it was normal for Mehmed II to want to be the ruler of the entire world. Indeed, he was a great one.

Beyond Islamic tolerance, Mehmed the Conqueror showed widespread tolerance to the Christian minorities of the Ottoman State, especially Orthodox religious sects in İstanbul. Undoubtedly, this served two purposes. First, he ruled a vast empire that included many minorities, and Islamic law allowed him to give these minorities enough tolerance to gain their hearts and collect taxes from them. Second, he used the tolerance policy over the Ottoman minorities against the European forces. His final ambition was to conquer all of Europe. He gave his grandsons the task of achieving this goal, and they half succeeded.

Mehmed II died in 1481 after conducting great wars and making laws for three decades. His body was buried in his tomb in the court of Fatih ("the Conqueror") Mosque in old İstanbul.
RELATED TOPICS